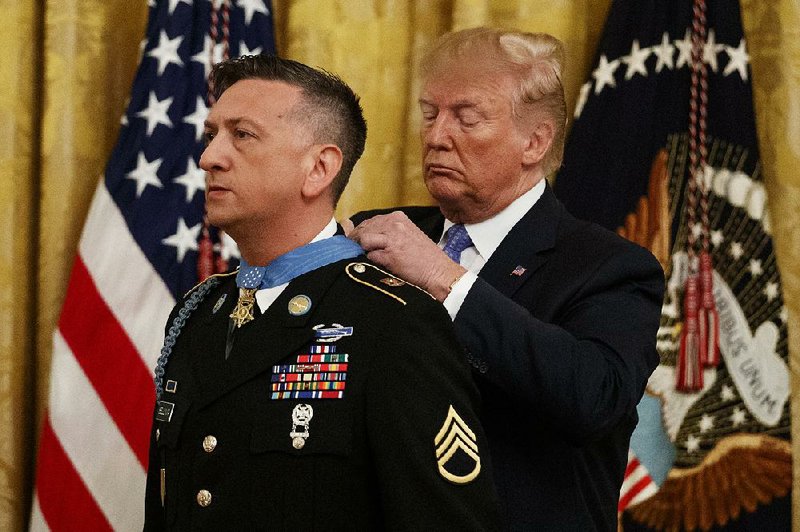 Army Staff Sgt. David Bellavia receives the Medal of Honor on Tuesday from President Donald Trump at the White House.

WASHINGTON -- President Donald Trump on Tuesday awarded the nation's highest military honor to an Iraq war veteran who took on an insurgent stronghold and allowed members of his platoon to move to safety during heavy fighting in Fallujah.

The president presented the Medal of Honor to former Army Staff Sgt. David G. Bellavia, of Lyndonville, N.Y. He is the first living Iraq war veteran to receive the honor.

Bellavia, 43, was leading a squad in support of Operation Phantom Fury in Fallujah in November 2004. The White House said that after Bellavia helped his platoon escape fire, he entered a house and killed at least four insurgents who were firing rocket-propelled grenades.

Bellavia, who left the Army in 2005, has been awarded the Silver Star, the Bronze Star and the New York State Conspicuous Service Cross.

Bellavia is among a group of service members whose valor awards have been upgraded after a review launched by former Defense Secretary Ashton Carter in 2016 of valor awards from the wars in Iraq and Afghanistan. In March, Army Staff Sgt. Travis Atkins posthumously was awarded the Medal of Honor for smothering a grenade in Iraq in 2007 to save the lives of fellow soldiers. More than 100 awards have been upgraded.

Col. Douglas Walter, Bellavia's former company commander, said he nominated Bellavia for the Medal of Honor early in 2005. Walter knew that senior military officials would closely scrutinize his recommendation, and "initially we weren't sure what happened to it."

Bellavia said Trump notified him late last year that he had been approved for an upgrade to the Medal of Honor.

"I always felt that there was the opportunity to have it re-evaluated and looked at, and obviously, apparently that did happen," Walter said. "So regardless of the process, we're sitting here today and we're honoring a great soldier and a great American for some pretty incredible things."

During the ceremony Tuesday, Trump recounted the events that led to Bellavia's recognition. Trump said Bellavia's squad was tasked with clearing 12 houses, and on the 10th house, insurgents opened fire, wounding multiple soldiers.

"David took over," Trump said. "He provided suppressive fire while his men evacuated, rescuing his entire squad at the risk of his own life. Only when his men were all out did David exit the building. But the fighting was far from over."

"Bleeding and badly wounded, David single-handedly defeated the forces who had attacked his unit and would have killed them all had it not been for the bravery of David," Trump said.

Bellavia ran for Congress in 2012, losing to Rep. Chris Collins in the Republican primary, and was talked about as a potential successor to Collins when Collins temporarily suspended his re-election campaign last summer after being indicted on insider trading charges. Bellavia's name is in play again as Collins, whose trial is pending, considers whether to run in 2020.

This is the ninth Medal of Honor that Trump has presented. The honor goes to members of the Armed Forces who distinguish themselves by gallantry above and beyond the call of duty.

Information for this article was contributed by Kevin Freking of The Associated Press and by Dan Lamothe of The Washington Post.

Print Headline: Veteran of Iraq war given Medal of Honor