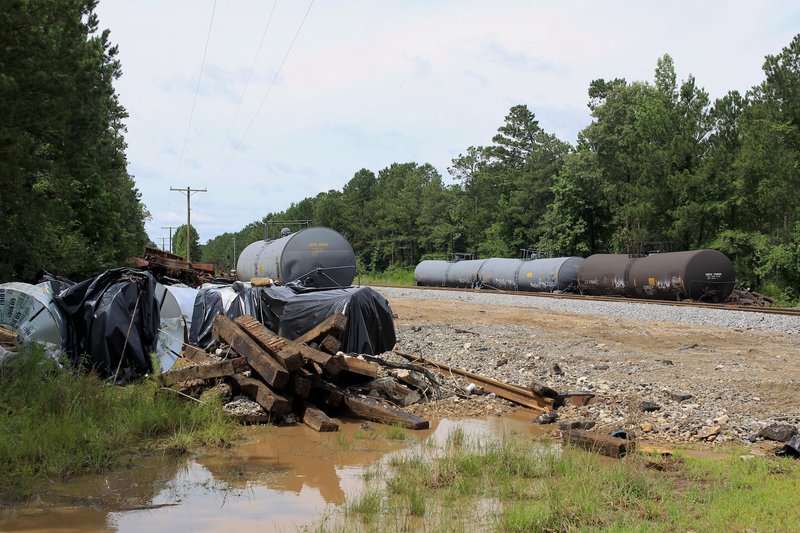 Tanker cars and materials sit beside the railroad tracks at the Gaddy Koonce Road railroad crossing in Jefferson County following the derailment of a Union Pacific train Saturday night. Sheriff's office officials said the crossing was supposed to have been repaired by Monday but that heavy thunderstorms that moved through the area Sunday delayed repair efforts. - Photo by Dale Ellis

PINE BLUFF — A train derailment Saturday night in Jefferson County has blocked off vehicular traffic at a railroad crossing at Gaddy Koonce Road until the crossing can be repaired, which could take until Friday.

About a dozen tanker cars were involved in the Union Pacific train derailment, the cause of which is unknown, according to a news release from the Jefferson County sheriff’s department.

Alicia Dorn, a spokesman for the sheriff’s department, said the crossing on Arkansas 54 just south of Gaddy Koonce Road also was closed for a time but reopened Monday morning after the rail cars that weren’t affected by the derailment were moved.

Train traffic had resumed at the crossing Monday, Dorn said, but it will be a few days before repairs to the roadway are completed and vehicular traffic resumes.

“Worst-case scenario, it will be opened by Friday,” Dorn said.

Kristen South, spokesman for Union Pacific Railroad, said the railroad assumes responsibility for the railroad tracks at the crossing and will either repair the roadway using its own crews or will reimburse the county for the cost of the repairs.

South said Union Pacific intends to have the crossing open to vehicular traffic by Wednesday.