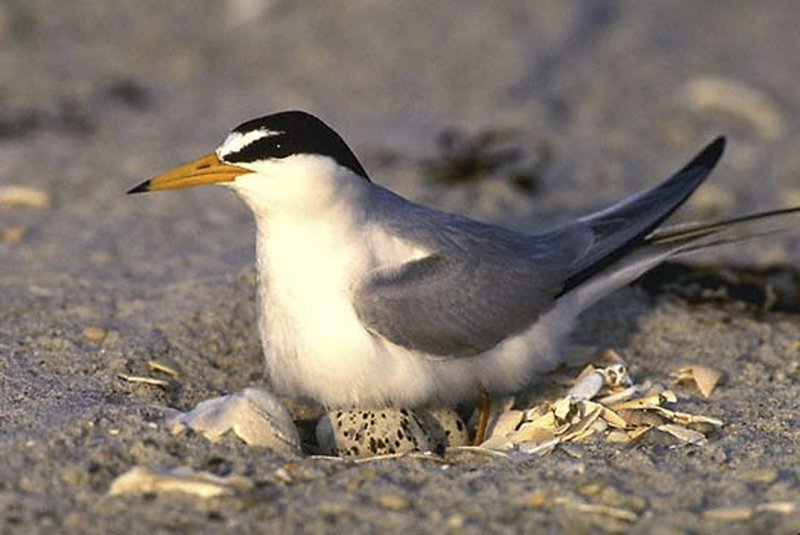 High water on the Arkansas River has covered sandbars and sand islands that normally provide nesting spots for a small, endangered migratory bird.

So about 35 interior least terns have decided to nest instead in a gravel lot at the Little Rock Port Authority.

"They're making do with a bad situation out there," said Dan Scheiman, bird conservation director for Audubon Arkansas.

The Port Authority has closed a gate to the lot to keep people from disturbing the birds, but they are still vulnerable to canine and raptor prey, said Rebecca Peak, senior endangered-species biologist with the U.S. Fish and Wildlife Service in Conway.

As the name implies, interior least terns are the smallest terns found in North America, and they summer along rivers in the interior of the continent. Peak said they grow to be 9 inches long and weigh 1.5 ounces. Adult least terns are mostly white with a yellow beak and black cap and eyeline.

"Often seen flying low over the water, with quick deep wingbeats and shrill cries, " according to audubon.org. "Usually hovers before plunging into water for tiny prey."

A least tern will use its breast and abdomen to scrape an indention into the sand, Peak said. That's where the birds lay their eggs. But the Port Authority terns have been doing that in the parking lot instead.

Peak said the interior least terns's breeding season in Arkansas is May through August. It takes about a month for their eggs to hatch, then another month to raise the chicks until they can fly.

"Departure from colonies by both adults and fledglings varies but is usually complete by early September," according to fws.gov/arkansas-es/Species/Birds/ILT.html. "This subspecies winters in Central and South America"

They may have moved farther away this year in search of sand, he said.

Scheiman said the terns also will nest on gravel rooftops. Roofs and islands provide some protection from predators, he said.

Scheiman said he notified Fish and Wildlife about the Port Authority least terns June 1, after a birder told him about them.

Bryan Day, executive director of the Port Authority, said he saw a bunch of birders with scopes and binoculars on the side of the road when the river rose a few weeks ago.

"I thought, 'What are they looking at?'" Day said.

Then he learned it was the terns.

"I'm familiar with the least tern because as a port guy I'm constantly talking with the Corps about navigation, and I know they're an endangered species," Day said.

"They're an endangered species so they need all the help they can get," he said.

"The interior least tern is endangered due to destruction, alteration and curtailment of nesting habitat," according to Fish and Wildlife. "Channelization, irrigation and the construction of reservoirs and pools have contributed to the elimination of much of the tern's sandbar nesting habitat in the Arkansas and Red River systems."

Day said he was glad to help protect the least terns. He said the lot where they are nesting is a gravel yard that was used as a construction staging area when 6,000 feet of rail track was added at the port.

"I'm glad these birds found our port in the storm, so to speak," he said. "We are committed to helping protect these birds from human disturbance."

Day said he had a forklift driver put two large concrete barriers in front of the gate to the tern lot, just in case someone tried to drive into it.

"We've protected the area from vehicular traffic," he said. "They've put up a couple of signs that say, 'This is a least tern nesting area.' ...

"It's kind of cool that a big, heavy industrial park like the port can play a small role in protecting an endangered species."