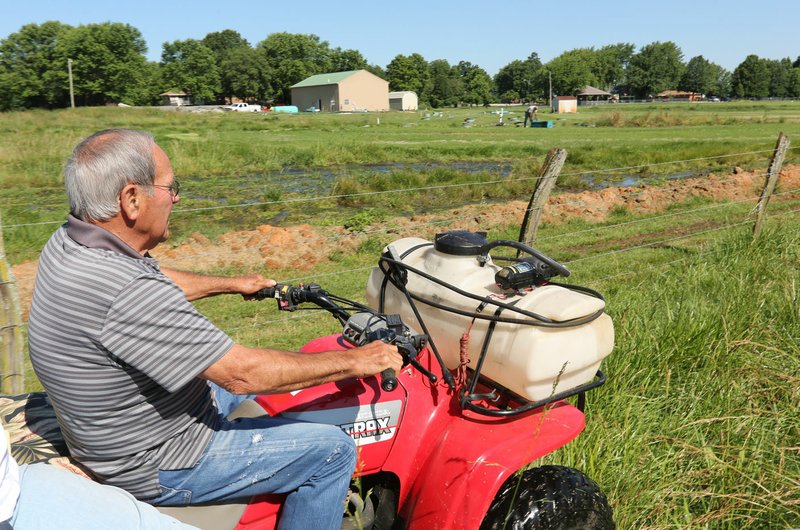 BETHEL HEIGHTS -- The city's wastewater treatment plant has been out of compliance for the better half of five years, and the state agency responsible for the plant's oversight agreed to much of the delay.

The city and state regulators have allowed sewage to pool on city land and the neighbors' property. Plant operators also released waste water underground containing too many contaminates. The state even relied on the city for years to self-report any problems, even though numerous state inspections noted the city's failure to report permit violations.

The city is violating its permit again, state regulators said in February. On May 6 it gave Bethel Heights 90 days to come up with a fix.

The violations threaten public health, nearby waterways and livestock. The situation likely means an expensive solution and a halt to development in the town.

"They've got E. coli floating in the field," said state Rep. Jana Della Rosa, R-Rogers, sharing a report from neighbors who tested the standing water. "Is that what's best for their citizens?" Della Rosa represents residents of Bethel Heights in the state Legislature.

Mayor Cindy Black repeatedly has refused comment on the issue. The state said it's handling of the Bethel Heights violations is standard.

The city's wastewater system was out of compliance for 32 months -- from May 2013 to December 2016, according to records of the Arkansas Department for Environmental Quality. The state granted 16 months of extensions for the city to fix its problems.

Records show the city stayed out of compliance for five more months during that time because the department didn't follow up on a June 1, 2014, deadline until Nov. 4 of that year.

The state considered Bethel Heights in compliance for most of 2017 and all of 2018, even though the city's monthly reports showed it was violating its permit.

The goal of Environmental Quality is to get all systems in compliance, said Jeff LeMaster, policy adviser for the department's Office of Water Quality.

"We want them to be serving the residents of their community in a responsible way," he said. "Sometimes it takes some time. Sometimes we have to think out of the box for a solution."

J.R. Davis, a spokesman for Gov. Asa Hutchinson, said the Department of Environmental Quality deals with these issues in every city in the state.

"The ADEQ certainly understands the seriousness of this issue," he said. "The whole idea is let's fix this."

The final treatment of the waste water depends on natural aerobic and bacterial activity of the soil, rather than being discharged or released directly into a lake, stream or river, Olsen said.

Documents from Environmental Quality record sewage surfacing in a field where the treatment system is buried as early as August 2013.

State officials required the city to submit a plan to correct the problems each time an inspection found it out of compliance, which follows the regular procedures for violations, LeMaster said.

The department fined the city $6,400 in June 2015 for similar violations of the Arkansas Water and Air Pollution Control Act. Again, the city was asked to submit a correction plan. The city received an extension for completing the plan and also received a reduction in the fine.

"They have followed the enforcement action and corrective action plan to our satisfaction," LeMaster said.

The city's wastewater permit was renewed in 2015. The Arkansas Department of Health submitted the only objections, including concern about the city's history of inaccurate measuring, recording and reporting data required to be collected daily.

Yet, the records show the problems that began in 2013 occurred nearly continuously until 2017, when city leaders reported to the state the system was finally in complete compliance. The state closed the enforcement case against Bethel Heights on Jan. 27, 2017, but in March, found the plant out of compliance again. A month later, the state said the city had addressed concerns to its satisfaction.

"We do believe they were in compliance," LeMaster said.

The state's records show no inspection of the Bethel Heights system from March 2017 to February this year. LeMaster said every wastewater treatment system the agency oversees receives an inspection every five years, unless the agency receives a complaint about the system. If a problem is found and corrected, the treatment plant goes back on the five-year rotation.

With the Bethel Heights case closed in 2017, the city's next scheduled inspection was for 2022, despite records from the city to the department showing at least 49 violations of treatment standards of its waste water release.

Della Rosa wonders why the department cleared the city in 2017.

"Did Bethel Heights city officials simply send a letter saying they were in compliance, or did somebody go out and look at it, check it out?" she asked. "I've asked the ADEQ people to check everything they do, don't trust them to self-report. But all I can do is push my agencies."

The inspection in February came at the behest of the treatment plant's neighbors.

Jason Steele reported more runoff, with high levels of contaminants, in January to Environmental Quality. After three cows died around a stock pond in 2016, the family has again and again taken samples and tested them using different laboratories. They all returned showing high levels of contaminates, said Joe Brooks, Jason's cousin.

"Until that first test, no one really knew how bad it was," Brooks said. A Jan. 28 test showed fecal coliform in the runoff on Steele land was 86 times stronger than the city's permit allows. Tests in March and April continued to show extremely high levels, reports show.

Jason Steele said he noticed a pipe with water running into his pond -- a pipe the family didn't lay. And the family has owned the land since his grandfather bought it in 1951, he said.

He alleges Bethel Heights funnels waste water the plant can't handle into his pond to get rid of it.

Steele fenced the pond to keep his cattle away. He also fenced his other pond this year after what he said were high levels of contaminates were found there, too. Now, he has water delivered for his cattle.

Last week, two workers were in the field of the wastewater plant next to the Lawrence Bowen's home. Two septic trucks left the plant in about an hour's time.

"At least they're doing something," said Bowen.

In March 2017, Bowen filed a report with the department complaining of flooding and contamination of his pond with untreated waste water. The state office opened another case against the city and required a new correction plan, but Bowen said nothing changed.

Nicole Hardiman, executive director of the Illinois River Watershed Project, said the bacteria in raw sewage can cause sickness and disease to anyone or any animal in contact with it.

Wesley Stites, a member of the state's Pollution Control and Ecology Commission, said the commission passes rules and hears appeals in its role as a judicial body. He declined to comment on Bethel Heights because the current enforcement case might appear before the panel as an appeal.

"At the most extreme," Stites said, "we don't want to drink our own sewage. Those are the reasons for the regulations." Stites also serves as the head of the biochemistry department at the University of Arkansas.

"It was precautionary action until we can come up with solutions," LeMaster said. "As problems are lingering, we want to have no additional stress on the system. We want to pause before adding new systems.

"We've had lots of conversations with Bethel Heights over the last couple of weeks," he added.

"Right now, the onus is on Bethel Heights," said Davis, the governor's spokesman.

Bethel Heights sits in a "sweet spot" for development in Northwest Arkansas, Jeff Cooperstein, a research assistant for the Center for Business and Economic Research at the University of Arkansas, said last month. But the moratorium on water hookups will stop development until the city deals with its sewer system.

"I don't think the moratorium will kill development forever," he said. "It's just delaying it, but that might be good."

LeMaster said he couldn't detail the violations and penalties involving Bethel Heights because he didn't work the case. He said the department works with leaders of any city to get a system back into compliance, also ensuring the system has the resources and mechanisms to comply.

"If a system follows a pattern of failing, then they need an upgrade -- a little more lift, tweaking, something -- and regular monitoring," LeMaster said. "Sometimes, when there is a long nature of an issue, it might be the lack of resources, such as finances."

Options for Bethel Heights might include upgrading the system or connecting the city's system to a larger wastewater treatment system in the area.

Della Rosa said she doesn't think the city has the money to fix its system. She wants the city to connect to another wastewater system in the area. The Environmental Department's job is a tough one, she said. Officials must strike a delicate balance between protecting the public and shutting everything down.

Shutting down an ailing system is kind of a nuclear plan, LeMaster said.

"To cease all operations creates a lot of risk. People would have to be evicted from their homes if there's no wastewater service."

Closing the Bethel Heights system "has not been mentioned. It's not on the horizon. And we won't do it until we've exhausted all other options," he said.

Stites said there has been a slew of issues with smaller systems throughout the state. The governor and Legislature have to deal with the bigger issue, he said.

"They're smaller cities and all that implies ... They might not have the money or the technical experience," he said.

Many cities in Northwest Arkansas express concern about sewer capacity, Cooperstein said. As development -- especially residential subdivisions -- spread from the region's cities into its rural areas, developers find they must build sewer lines and even pump stations to get the area's waste water to a treatment plant, he said.

Highfill and Cave Springs are trying to raise money to add their systems to the regional treatment plant operated in southern Bentonville by the Northwest Arkansas Conservation Authority.

As one of the fastest-growing cities in the region, Noblett and other city leaders have looked to the future of Cave Springs.

A study found connecting the city's system with the conservation authority's plant in southern Bentonville was the best choice for the city. The city will need to build a pipeline to the plant, with gravity providing the force to carry the water, Noblett said.

An early estimation puts the cost for the new connection at $6.2 million. Noblett said he hopes to find creative means of financing, so residents' rates for sewer service don't increase.

Noblett said he wants the connection with the regional treatment plant to come quickly, but he expects the process to take two or three years.

"We don't want to get to the point that we have to stop building," he said. "We want transmission on our own terms."