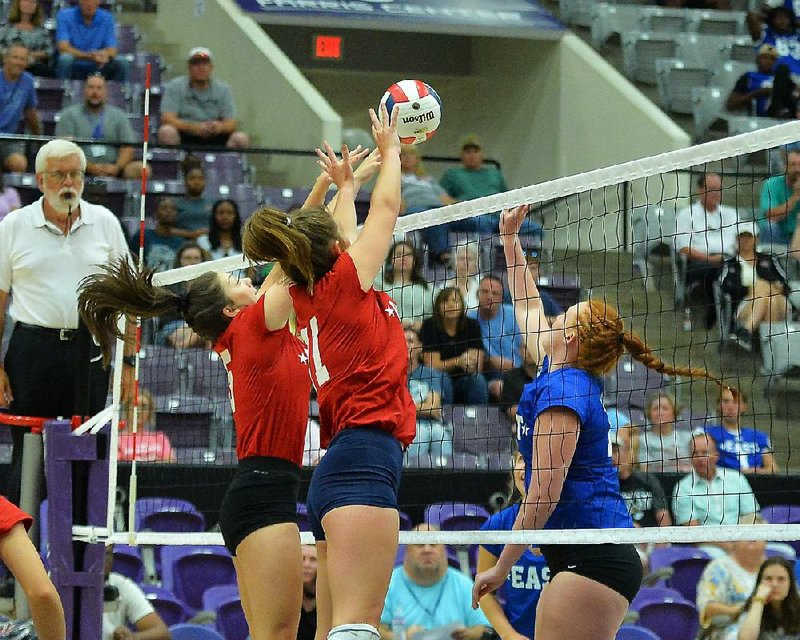 The West’s Joni Inman (left) of Paris fires a volley during the Arkansas High School Coaches Association All-Star volleyball match Friday in the Farris Center in Conway. The East won 9-25, 25-16, 25-21, 25-12, 15-10. More photos from this game are available at arkansasonline.com/galleries.

CONWAY -- It didn't look good for the East team during the first set of the Arkansas High School Coaches Association All-Star volleyball match Friday in the Farris Center, but when their shortest player came into the contest, it was a whole other ballgame.

"In the second game, Sydney came in and did a tremendous job for us," East Coach Laura Crow said. "She did a great job of getting our passes where they needed to be so we could run our offense. And that was what we were struggling with in that first set."

For her efforts, Sample was named the Most Valuable Player of the match.

"It's just about being a good teammate," Sample said. "And when your team is a little down, it's about picking them up and telling them to believe in themselves."

Behind six kills by Greenwood's Abby Cagle, the West blew the first game open over the slower East. It was 9-2 before the East narrowed the margin before the West ended with a 9-1 run for its lone set victory.

"We were a little nervous at first," Sample said. "We just called it the first-game jitters. But we all believe in each other and that showed on the court in the last four games."

The West scored the first two points of the second set before the East bounced back to take a 3-2 lead on an ace by Tori Cupp (Crowley's Ridge). The lead changed hands for a while until the West led 15-13 on a kill by Springdale Har-Ber's Jayci Carpenter.

Conway's Karli Ferguson then knocked down her third kill of the set that got the East going. The East picked up more steam on Ferguson's fourth kill for a 19-15 lead thanks to a 6-0 run. After a hitting error gave the West one last point, the East finished the set with another 6-0 run, getting two kills and a block from Newport's Chloe Hardaway, a late addition to the team

"We kind of settled in during the second set, and in the third set we were able to run our 6-2 offense, and that helped us out tremendously," Crow said.

It was another slow start for the East in the third set, falling behind 9-2 as Joni Inman (Paris) had three kills to lead the way. The West was up 14-9 when the East rattled off 12 consecutive points. Fort Smith Southside's Hannah Holland had four kills and a block to help her team's cause but Jonesboro's Cameron Hafner served three aces to push the East lead to 21-14. The West, again led by Inman, battled back to within 24-21 before a kill by Paragould's Zoey Beasley sealed the East victory.

For the first time in the match, the East took control early in the fourth set, running out to an 11-3 lead and led by as much as 20-7. Emily Grace Calhoon of Valley View, who was named the East's outstanding player, and Cupp each had three kills and Batesville's Taylor Griffin had two kills in the set.

The East broke a 5-5 tie with a 7-0 run to cruise to its final set victory in the fifth.

The East finished with 49 kills, 9 by Madison Lawson of Ridgefield Christian, 7 by Calhoon and 6 each by Holland and Ferguson.

The West finished with 44 kills, 13 by Cagle, 9 by Inman and 6 by Lexi Richards of Shiloh Christian. Chloe Price of Siloam Springs dished out 26 assists while Molly Kingston of Springdale Har-Ber had 15 digs and Ryleigh Hardwick of Paris served three aces.