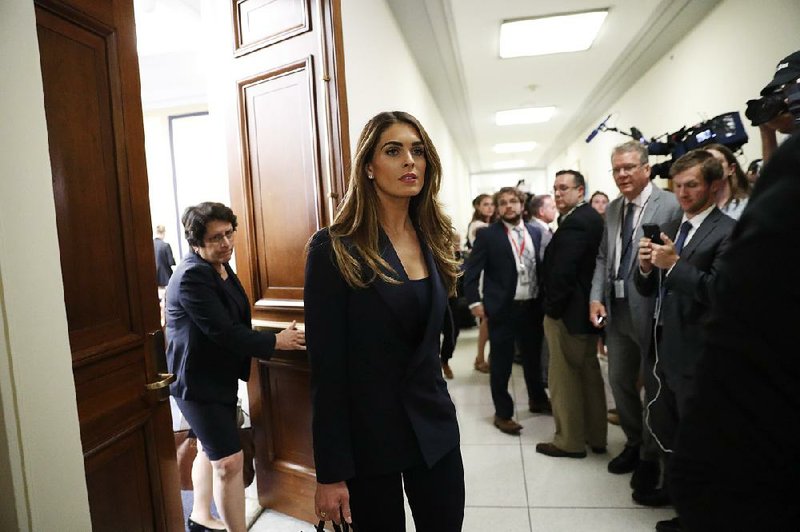 Hope Hicks leaves a closed hearing Wednesday on Capitol Hill. The former White House communications director gave no testimony about her time in the West Wing but reportedly did answer some questions about the 2016 presidential campaign.

WASHINGTON -- The White House barred a former top aide to President Donald Trump from answering dozens of questions about her time in the administration, angering House Democrats and raising the prospect of lawmakers asking the courts to settle the issue.

During a private interview with the House Judiciary Committee on Wednesday, a White House attorney and Justice Department lawyer kept Hope Hicks from answering questions about her tenure in the West Wing, claiming immunity for the executive branch -- although Hicks is a private citizen.

House Judiciary Committee Chairman Jerrold Nadler, D-N.Y., said Hicks' lawyers asserted the White House's principle that as one of Trump's close advisers she is "absolutely immune" from talking about her time there because of separation of powers between the legislative and executive branches. Nadler said that principle is "ridiculous" and that Democrats intend to "destroy" it in court.

In a letter Tuesday to Nadler, White House counsel Pat Cipollone wrote that Trump had directed Hicks not to answer questions "relating to the time of her service as a senior adviser to the president." The White House has similarly cited broad executive privilege with respect to many of the Democrats' other investigative demands, using the president's power to withhold information to protect the confidentiality of the Oval Office decision-making process.

Democrats immediately countered that the immunity assertion was made up, accusing the White House of trying to stonewall their investigations.

"I'm watching obstruction of justice in action," said Rep. Ted Lieu, D-Calif., a committee member, emerging from the hearing room. "What are they trying to hide from the American people?"

Democrats asked Hicks to testify as part of their ongoing investigation into whether Trump obstructed justice as nearly 70 Democrats have called for starting impeachment proceedings. The Judiciary Committee said it intended to release a full transcript of the interview within 48 hours.

Hicks worked for Trump before he declared his bid for office, served as press secretary on the Trump campaign and then served as White House communications director. She is also mentioned more than 180 times in former special counsel Robert Mueller's report on Russian interference in the 2016 election and possible obstruction of justice by Trump.

The claim of absolute immunity is separate from the concept of executive privilege. The Justice Department under both Republican and Democratic administrations has taken the position that the president's closest advisers have such immunity from congressional subpoenas so they cannot be forced to comply with demands for testimony. But the theory has not been fully proven in court, and Democrats believe it is unlikely to stand up when tested.

Two hours into the session, Trump expressed his frustration on Twitter, complaining about the Democrats' focus on Hicks rather than 2016 presidential nominee Hillary Clinton.

"The Dems are very unhappy with the Mueller Report, so after almost 3 years, they want a Redo, or Do Over. This is extreme Presidential Harassment. They gave Crooked Hillary's people complete Immunity, yet now they bring back Hope Hicks. Why aren't the Dems looking at the . .. 33,000 Emails that Hillary and her lawyer deleted and acid washed AFTER GETTING A SUBPOENA FROM CONGRESS? That is real Obstruction that the Dems want no part of because their hearings are RIGGED and a disgrace to our Country!"

Committee Republicans also criticized the Democrats, accusing them of trying to "relitigate" the Mueller investigation.

"There's been nothing new here," said Rep. Doug Collins, R-Ga., the committee's top Republican who assailed Lieu for tweeting about the session.

"They are just trying to continue to make some hay out of the whole Russian collusion and obstruction of justice," said Rep. Steve Chabot, R-Ohio. "They seem to be bound and determined to keep this story alive about the president getting impeached."

The session was Democrats' first interview with a former White House official since Trump asserted executive privilege to bar current and former aides' cooperation. Before the hearing, Democrats laid out topics they hoped to probe relating to possible obstruction, including: Trump's firing of FBI Director James Comey, his feelings toward former national security adviser Michael Flynn, who pleaded guilty to lying to law enforcement about his contacts with a Russian diplomat, and Trump's attitude toward former attorney general Jeff Sessions.

Those hopes were dashed, however, because of the White House's assertion of immunity, which extended to simple questions about where her office was located, according to lawmakers in the room.

Democrats emerged from the room discussing the possibility of having to take Hicks to court to force her to answer questions. The committee is already preparing to sue former White House counsel Donald McGahn over noncompliance with a congressional subpoena.

"Her refusal to answer questions is based on this very bogus immunity, sort of newly invented, very broad immunity, that you can never be asked anything about anything you ever did while you worked for the president, which is an absurdity... . This will ultimately be decided by a court," said Rep. David Cicilline, D-R.I.

Hicks, however, did answer some questions about her time on the campaign, including topics such as Russia interference and WikiLeaks references made in meetings. Cicilline said she was asked about the president's alleged relationship with Playboy model Karen McDougal, though he did not say how she answered.

Three days before the 2016 election, the Wall Street Journal reported that the National Enquirer had agreed to pay $150,000 to McDougal, who said she had an affair with Trump a decade earlier, but never ran a story. Asked about the payment at the time, Hicks told the Journal: "We have no knowledge of any of this," adding that McDougal's claim of an affair was "totally untrue."

But Trump attorney Michael Cohen and David Pecker, chief executive of the magazine's parent company, American Media Inc., acknowledged that Pecker agreed to pay McDougal as a way of securing her silence before the election. Cohen -- who pleaded guilty to a campaign finance violation in connection with the episode last year -- said the deal was arranged at Trump's direction.

In March, Trump appeared to acknowledge the hush-money payments while insisting he had not violated campaign finance laws.

Information for this article was contributed by Rachael Bade of The Washington Post; by Mary Clare Jalonick, Laurie Kellman, Padmananda Rama and Eric Tucker of The Associated Press; and by Nicholas Fandos of The New York Times. 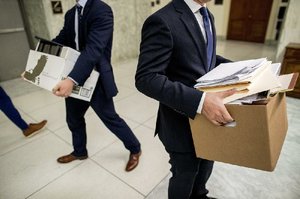 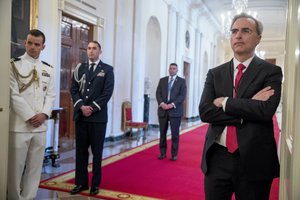 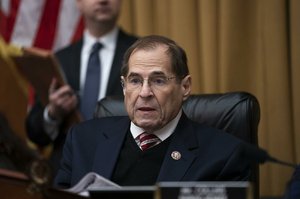 Photo by AP
In this March 26, 2019 photo, House Judiciary Committee Chairman Jerrold Nadler, D-N.Y., presides at a meeting directing the attorney general to transmit documents to the House of Representatives relating to the actions of former Acting FBI Director Andrew McCabe, on Capitol Hill in Washington.