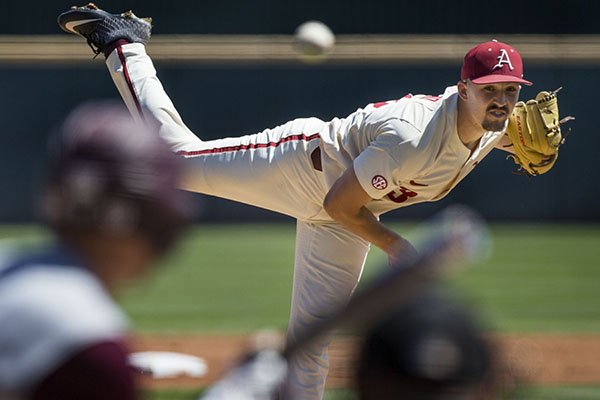 Arkansas pitcher Connor Noland throws during a game against Mississippi State on Saturday, April 20, 2019, in Fayetteville. - Photo by Ben Goff

Connor Noland, who played quarterback for the Arkansas football team last fall and is a starting pitcher for the Razorbacks' baseball team, has decided to concentrate on baseball for the foreseeable future.

"l still love playing both sports, but I'll now be devoting my full attention and efforts into becoming the best baseball player I can possibly be,” said Noland, who hasn’t ruled out a return to football at some point.

Noland was named to the SEC All-Freshman Team and to Perfect Game's Freshman All-America second team after starting 19 games as a freshman pitcher for the Razorbacks.

“We’re happy for Connor," Arkansas baseball coach Dave Van Horn said. "We know this decision wasn’t easy, as his love for both sports has been apparent since we first met him. We’re happy that he was able to come to this decision on his own with his family.

"I look forward to working with Connor this summer and into the fall as we get ready for our 2020 season.”

He played in four football games last fall, including a start in a 23-0 win over Tulsa on Oct. 20. Noland became the first Arkansas freshman quarterback to start a game in 12 years. He also played the majority of the Razorbacks' season-ending loss at Missouri last November.

Noland entered the spring as one of two quarterbacks with playing experience at Arkansas, but he was not able to go through many spring practice sessions because of the overlap with the baseball season.

He met with and told Arkansas football coach Chad Morris and offensive coordinator and quarterback coach Joe Craddock of his decision before his announcement. Noland said he remains "100 percent supportive" of the football program.

“We’re excited for Connor and his future in baseball," Morris said. "He’s a tremendous competitor, an outstanding athlete and a Razorback who will succeed in anything he does. I can’t wait to be in the seats at Baum-Walker next spring to watch him pitch.”

Noland was a dual-sport athlete at Greenwood High School. He led the Bulldogs to state titles in football and baseball as a senior and was named the MVP of both championship games.

A 2018 preseason All-American by Perfect Game, Noland was 10-0 and had a 0.42 ERA, struck out 123 batters and walked 14 as a senior at Greenwood. He struck out 12 batters in Greenwood’s 4-0 victory over Benton in the Class 6A state championship game.

He was named the Arkansas Democrat-Gazette All-Arkansas Preps baseball player of the year.

Noland’s father, Frank, told his son he would know when it was time to focus on one sport.

“I told him the sport will chose you, you’re not going to chose a sport,” Frank Noland said.