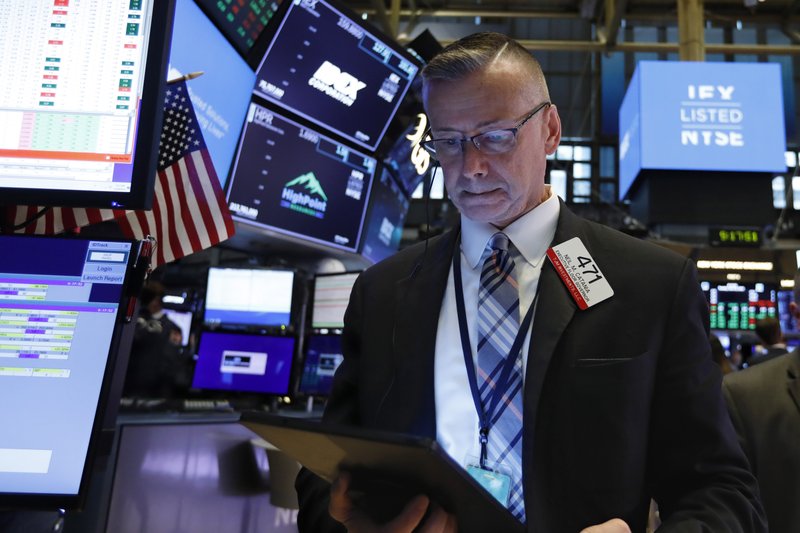 Trader Neil Catania works on the floor of the New York Stock Exchange, Tuesday, June 18, 2019. Stocks are opening higher on Wall Street following big gains in Europe after the head of the European Central Bank said it was ready to cut interest rates and provide more economic stimulus if necessary. (AP Photo/Richard Drew)

Technology stocks powered much of the rally as investors welcomed news that the leaders of the U.S. and China plan to meet next week to discuss their long-running trade dispute. Investors have been hoping for any positive sign in the trade war between the world's largest economies.

It's not the first time the market has rallied because of seemingly encouraging developments on trade. Previous signs of progress did not pan out, triggering market turbulence.

"You sort of have to ignore it a little bit," said Tobias Carlisle, founder and portfolio manager at Acquirers Funds. "It's probably going to drag out to the end of the year, so what we're trying to do is buy something undervalued, and it's great when there's a day like today and it works."

The market also got a boost after the head of the European Central Bank said it was ready to cut interest rates and provide additional economic stimulus if necessary. The remarks put the spotlight on the Federal Reserve, which is set to announce its decision on interest rates today.

It was the second-straight gain for the market, extending a strong rebound for stocks in June after a steep sell-off last month.

The wave of buying got its start overseas early Tuesday after the remarks from the head of the European Central Bank. Major indexes in Europe closed sharply higher.

President Donald Trump stirred fresh optimism among investors when he said he will hold talks with Chinese President Xi Jinping at an international summit in Japan. U.S. businesses have implored Trump to stop escalating the trade war and refrain from expanding his tariffs to $300 billion worth of goods from China.

A prospective meeting between the U.S. and Chinese leaders is welcome news for a market that has been searching for some direction. "If you think back a week ago, there was a fear they wouldn't even talk at all," said J.J. Kinahan, chief market strategist at TD Ameritrade.

Investors were also looking ahead to the Fed's interest rate policy announcement today.

Two weeks ago, Fed Chairman Jerome Powell set off a rally on Wall Street after he signaled that the central bank is willing to cut interest rates to help stabilize the economy if the trade war between the U.S. and China starts to crimp growth. Any continued escalations could put the brakes on what is poised to be the longest economic expansion in U.S. history.

Most analysts say they think economic growth has slowed sharply in the April-June quarter to about a 1.5% percent annual rate, only half the pace of the past year.

Investors collectively envision a Fed rate cut by July and possibly further cuts after that.