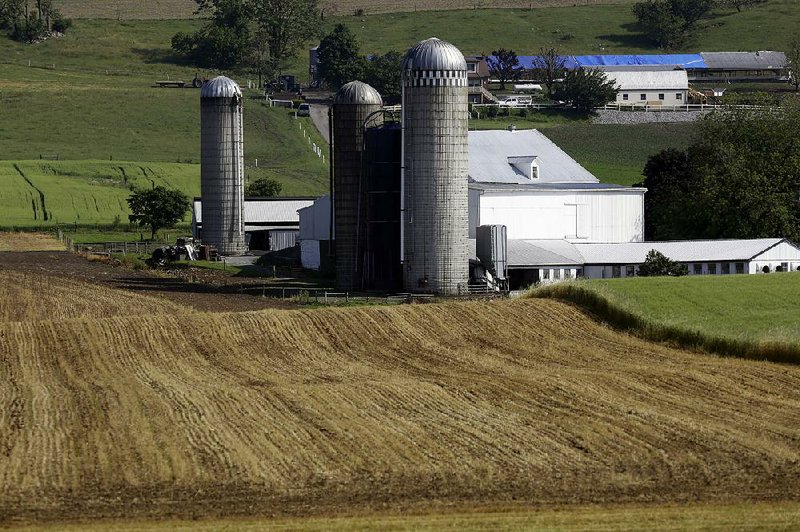 A measure of underlying U.S. wholesale prices rose in May at the slowest pace in more than a year, partially held down by a 0.3% drop in prices for food produced at farms such as this one outside Morgantown, Pa., shown last month.

WASHINGTON -- U.S. wholesale prices rose just 0.1% in May, another sign that inflation remains under control.

The Labor Department says the increase last month in its producer price index, which measures inflation pressures before they reach consumers, was half April's 0.2% increase.

The entire gain in May came from a 0.3% increase in the wholesale price of services. Goods prices fell 0.2%. The cost of goods declined 0.2%, as gasoline prices fell, after rising 0.3% the previous month.

Over the past year, producer prices have risen 1.8%. Excluding the volatile food and energy categories, wholesale prices rose 0.2% in May from April and 2.3% from May 2018.

Energy prices fell 1% from the previous month, the first decline since January, and food costs dropped 0.3%.

Slower inflation would give the Fed more latitude to lower borrowing costs after signs that the economy is slowing. While the consumer price index is considered a more important indicator of inflation, analysts monitor producer prices -- which cover wholesale and other business selling costs -- to assess how the pressures will filter through to consumers.

Despite the lowest unemployment in 49 years and tariffs on billions in foreign goods, inflation throughout the economy has stayed relatively contained, hovering below the Fed's target for its preferred gauge. President Donald Trump has touted the state of prices as he repeatedly pressures the central bank to cut interest rates and boost growth.

Today's consumer price index data will offer a fuller picture of the state of prices in May. Year-over-year core inflation is forecast to hold at 2.1% while the overall index probably eased to 1.9%. Investors see a Fed interest-rate cut as likely in July after May payrolls came in below all economist estimates.

Information for this article was contributed by Paul Wiseman of The Associated Press and by Reade Pickert of Bloomberg News.

Print Headline: Wholesale prices in May tick up 0.1%