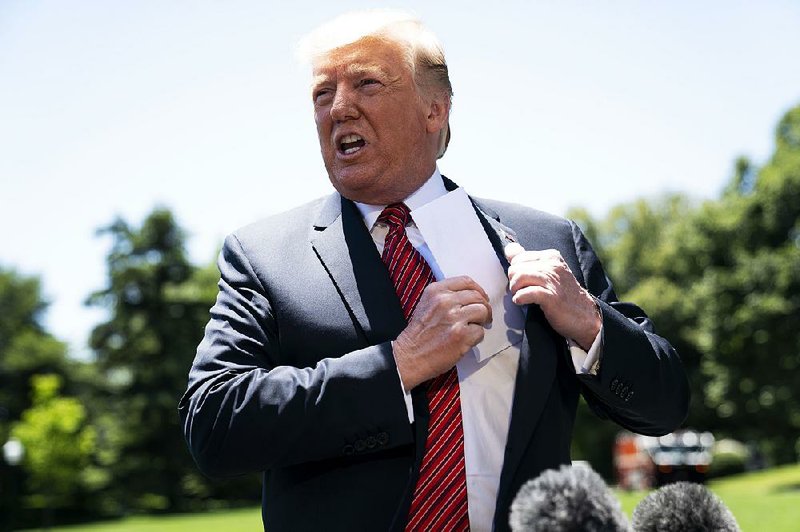 President Donald Trump puts away a page from what he said was a lengthy secret agreement with Mexico during a session with reporters Tuesday outside the White House.

WASHINGTON -- President Donald Trump told reporters that he reached a secret pact with Mexico that will take effect when he wants it to -- despite the country's insistence that there are no secret components of an immigration deal struck last week.

"That's the agreement that everybody says I don't have," Trump said Tuesday at the White House, holding one page of what he described as a lengthy deal but declining to explain the details. "If they bring the numbers way down, we won't have to use it. OK?"

Asked by reporters to reveal what the agreement requires Mexico to do, Trump declined to do so, adding that "the reason is Mexico wants to handle that."

Acting White House Chief of Staff Mick Mulvaney said separately at a conference in Washington that the deal relates to asylum and would be put in place if the immigration agreement doesn't stem the flow of migrants to the U.S.

Trump said Friday that he was dropping plans for tariffs on Mexico, which he'd been threatening to impose for the previous week, after the country promised new steps to stem an influx of illegal migration into the U.S.

Under the immigration deal, Mexico will expand deployment of its National Guard throughout the country, "giving priority to its southern border," according to a joint statement from the two countries. Asylum seekers who cross into the U.S. will be quickly returned to Mexico where they'll wait for their claims to be resolved; the U.S. agreed to accelerate adjudication.

Mexican officials have said that there's an agreement to evaluate the success of current measures after 45 days and see if they're working or if more needs to be done.

But it wasn't clear whether Trump could trigger an agreement, as he asserted. Trump said the agreement he was referring to would need to be ratified by the Mexican Congress.

Moments later, he said that "it will go into effect when Mexico tells me it's OK to release it."

A close-up photograph taken by a Washington Post reporter of the paper that Trump waved shows what appears to be a one-page letter signed Friday by two people whose names are unclear.

The final paragraph of the letter seems to refer to the agreement announced Friday, called a joint declaration, and describes what will happen if the United States is not satisfied that the flow of migration to the southwestern border has slowed sufficiently.

"If the United States determines at its discretion and after consultation with Mexico, after 45 calendar days from the date of the issuance of the Joint Declaration, that the measures adopted by the Government of Mexico pursuant to the Joint Declaration have not sufficiently achieved results in addressing the flow of migrants to the southern border of the United States, the Government of Mexico will take all necessary steps under domestic law to bring the agreement into force with a view to ensuring that the agreement will enter into force within 45 days," the letter says.

Because of Trump's mention of approval by Mexico's Congress, Mexican officials and others have said they believe the president is referring to discussions about changes to the region's asylum rules, which Mexico has said it would consider if the flow of migrants to the United States is not reduced over the next several months.

Mexican Foreign Minister Marcelo Ebrard said Tuesday that if illegal immigration into the U.S. isn't reduced, the U.S. is proposing that Mexico accept asylum applications from migrants from Central America instead of allowing them to apply in the U.S.

"If the measures that we have proposed do not work, we would have to enter into a discussion of other measures," Ebrard said.

Later Tuesday, Ebrard again said that there was no additional deal beyond what both governments had announced on Friday. "We don't have anything to hide," he said.

Reading from a letter that he sent to the Mexican Senate, Ebrard gave a detailed account of the negotiations between the Mexican and U.S. governments, emphasizing how U.S. officials had repeatedly insisted that Mexico sign an agreement that would require migrants traveling through Mexico to seek asylum there rather than in the United States -- known as "safe third country."

Instead, Mexico negotiated a 45-day window to show that its own measures to stem the flow of migrants would work. If they do not, Ebrard said, then the two sides agreed to an additional 45-day period to discuss a bilateral or regional agreement to return migrants.

The letter to the Mexican Senate suggested that the Mexicans had agreed that should the current measures fail to reduce migration, they would enter into negotiations about alternative solutions that would, at a minimum, require Mexico to assume more of the burden of asylum seekers heading toward the United States.

"Instead of accepting a safe third country agreement as the United States proposed, or the beginning of a trade war," Ebrard's letter said, "we managed to get a period of 45 days to demonstrate the efficiency of the measures that will be adopted and prepare ourselves as best we can for the negotiation that could follow in the next 45 days."

Ebrard had given a similar explanation of the agreement on Monday, but he said Tuesday that he was taking the unusual step of making his letter public to be as transparent as possible.

In Mexico, officials said on Tuesday that they are beginning deployment of the country's new National Guard for immigration enforcement, an accelerated commitment of a 6,000-strong force made as part of the agreement with the U.S.

President Andres Manuel Lopez Obrador and Ebrard also announced that a team of five officials, including a general and a prison director, has been formed to implement the immigration plan.

Ebrard said that Gen. Vicente Antonio Hernandez Sanchez, commander of the Tapachula military zone near the border with Guatemala, will begin a tour of the south "to speed up the deployment in the area."

The main objective is to register migrants, offer them options for regularizing their immigration status and return those who don't want to register, he added.

Ebrard did not mention detentions, which have risen notably in recent months, but he said there is a need to expand and improve crowded immigration facilities that operate as detention centers.

Another deployment is going to the frontier with the United States to attend to migrants who have been returned to Mexico while their asylum claims are processed in U.S. courts.

Information for this article was contributed by Justin Sink, Eric Martin, Katia Dmitrieva and Margaret Talev of Bloomberg News; by Michael D. Shear of The New York Times; and by Marco Ugarte of The Associated Press.

Print Headline: Trump says secret deal is up to him