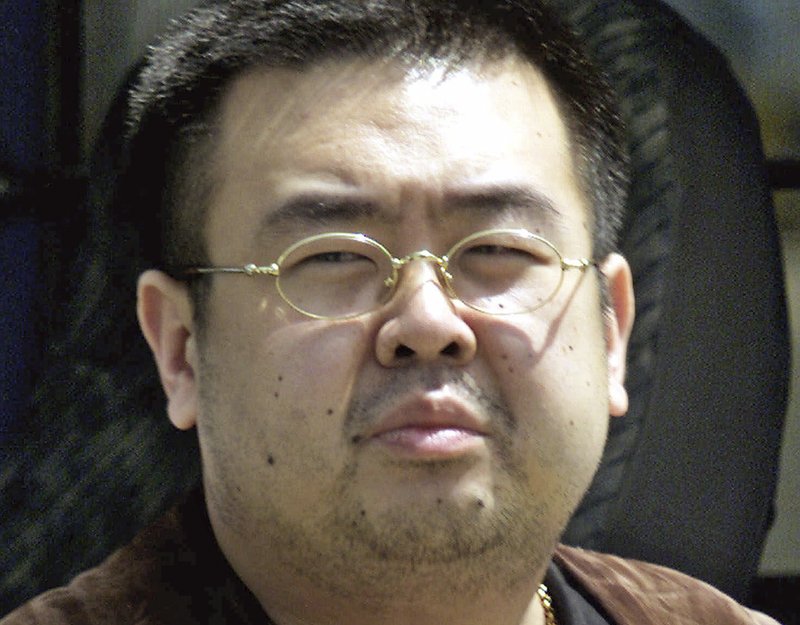 FILE - This May 4, 2001, file photo shows Kim Jong Nam, exiled half brother of North Korea's leader Kim Jong Un, in Narita, Japan. South Korean agencies said Tuesday, June 11, 2019, they could not confirm a report that Kim Jong Nam was a U.S. intelligence source and had traveled to Malaysia to meet his CIA contact before being assassinated there in 2017. (AP Photos/Shizuo Kambayashi, File)

Trump rules out spying use of Kim's kin

WASHINGTON -- President Donald Trump said Tuesday that he would not approve of U.S. intelligence agencies using family members of North Korean leader Kim Jong Un as assets, a day after a report that Kim's half brother had traveled to Malaysia to meet his CIA contact before being assassinated there in 2017.

Trump said he was aware of the report on Kim Jong Nam's alleged contacts with U.S. intelligence officials published Monday by The Wall Street Journal, which cited a "person knowledgeable about the matter." The U.S. president said his message to the North Korean leader would be that, "I wouldn't let that happen under my auspices."

Trump's comments came during an impasse in nuclear talks with Kim. Trump, who said he had "just received a beautiful letter" from Kim, said Kim had kept his word in halting tests of nuclear weapons and long-range ballistic missiles.

Kim Jong Nam was the eldest son in the current generation of North Korea's ruling family and could have been seen as a threat to Kim Jong Un's rule.

The Journal said Kim Jong Nam met on several occasions with CIA operatives, but also that many details of his relationship with the agency remain unclear.

NYC pilot not certified to fly in rain, fog

NEW YORK -- The pilot killed Monday when his helicopter slammed into the roof of a New York City skyscraper was not authorized to fly in limited visibility, according to his pilot certification, raising questions about why he took off in fog and steady rain.

Tim McCormack, 58, was certified only to fly under regulations known as visual flight rules, which require generally good weather and clear conditions, according to the Federal Aviation Administration.

The rules require at least 3 miles of visibility and that the sky is clear of clouds for daytime flights. The visibility at the time of Monday's crash was about 1¼ miles at nearby Central Park, with low clouds blanketing the skyline.

McCormack was not certified to use instruments to help fly through cloudy or bad weather, said the FAA.

The crash in the tightly controlled airspace of midtown Manhattan shook the 750-foot AXA Equitable building, obliterated the Agusta A109E helicopter, sparked a fire and forced office workers to flee.

At a National Transportation Safety Board briefing Tuesday, air safety investigator Doug Brazy said that McCormack had arrived at a heliport on New York City's East River after a trip carrying one passenger from nearby Westchester County.

The passenger told investigators there was nothing out of the ordinary about the 15-minute flight, Brazy said.

MONTPELIER, Vt. -- Vermont's Republican governor has signed a bill passed by the Democrat-controlled Legislature that protects women's access to abortion after proponents' concerns that the U.S. Supreme Court could review Roe v. Wade.

"This legislation affirms what is already allowable in Vermont -- protecting reproductive rights and ensuring those decisions remain between a woman and her health care provider," he said in a written statement. "I know this issue can be polarizing, so I appreciate the respectful tone and civility from all sides throughout this discussion."

Some Democrat-led states are seeking to preserve abortion rights in state law, while some Republican-led states have placed restrictions on abortion.

The Vermont measure is separate from a proposal to amend the state constitution to guarantee a woman's right to an abortion. That proposed constitutional amendment has to be passed again by the Legislature elected in 2020 and then, if approved a second time, be approved by voters in a statewide referendum that would be held in 2022.

WASHINGTON -- The Justice Department says nearly 1,700 people have been arrested after a two-month crackdown aimed at targeting suspected child predators.

The investigation, nicknamed "Broken Heart," was conducted in April and May. Officials said they investigated more than 18,500 complaints of crimes against children.

Attorney General William Barr vowed to bring "the full force of the law against sexual predators."

Officials say the crackdown targeted suspects who produced or possessed child pornography, who tried to entice children online for sex, traveled to other states or countries to abuse children or engaged in sex trafficking.

Print Headline: The nation in brief