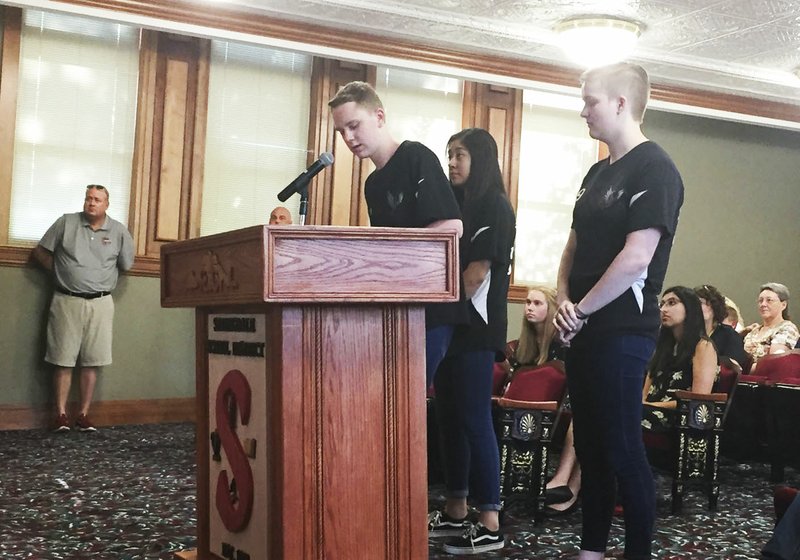 SPRINGDALE -- A Tyson School of Innovation robotics team has been chosen to represent the United States at an international competition this fall.

Root Negative One is headed for the FIRST Global Challenge in Dubai, three team members announced during a presentation at Tuesday's School Board meeting.

To make a tax-deductible donation to Root Negative One, send a check payable to “SOI Robotics” to the Don Tyson School of Innovation, 2667 Hylton Road, Springdale, Ark., 72764.

"This event is often thought of as the robotics Olympics," said Abby Herrera, who will be a senior at the School of Innovation this fall. "More than 180 countries will send one team to this event. And we are thrilled to have been selected to represent our country."

FIRST stands for For Inspiration and Recognition of Science and Technology. The organization is known for its robotics competitions for kids of various ages. Students design, build and program a robot to compete in a floor game.

Root Negative One was founded four years ago. University of Arkansas College of Engineering professors Richard Cassady and Chase Rainwater serve as volunteer coaches. Cassady's son, James, has been part of the team since he was an eighth-grader.

This year's Global Challenge is the third such event; previous editions were held in Washington and Mexico City. A different challenge is presented each year "in an effort to foster understanding and cooperation among the youth of the world as they use their abilities to solve the world's problems," according to the Global Challenge website.

Root Negative One has 14 members, but is allowed to bring only five to the Global Challenge. Seniority likely will play a large part in which five members are chosen to go, James Cassady said. Cassady, Herrera and fellow senior Sara Manos all have been with the team since it was founded.

Team members are focused on raising money for their trip to Dubai, located in the United Arab Emirates. The cost is $10,000, which covers most expenses except for team members' airfare, Herrera said.

The team has developed different versions of a presentation it made to the board Tuesday and is reaching out to individuals and companies for financial help, Herrera said.

Herrera told the board the program is about much more than just playing with robots.

"We have mentored hundreds of Northwest Arkansas youth, introducing them to skills and opportunities they might not otherwise have found," she said.

In other news from Tuesday's board meeting, the board unanimously approved increasing the certified salary schedule by $516 for certified employees retroactive to July 1.

Certified employees will receive their additional $516 for the 2018-19 school year this month, adding $1.2 million to the district's expenses for this school year. The revised salary schedule will be carried forward next school year.

That raises Springdale's minimum teacher salary from $47,766 to $48,282, highest in the state. Springdale's move comes less than a month after the Fayetteville School District boosted its teacher pay by 1%, raising its minimum salary to $46,449.

The Springdale board also agreed to increase all classified salary schedules by at least 0.88%. Some classified staff members, including the child nutrition coordinator and the food service assistant director, will see double that in order to get them closer to the average pay for their positions in the region, said Jared Cleveland, deputy superintendent.