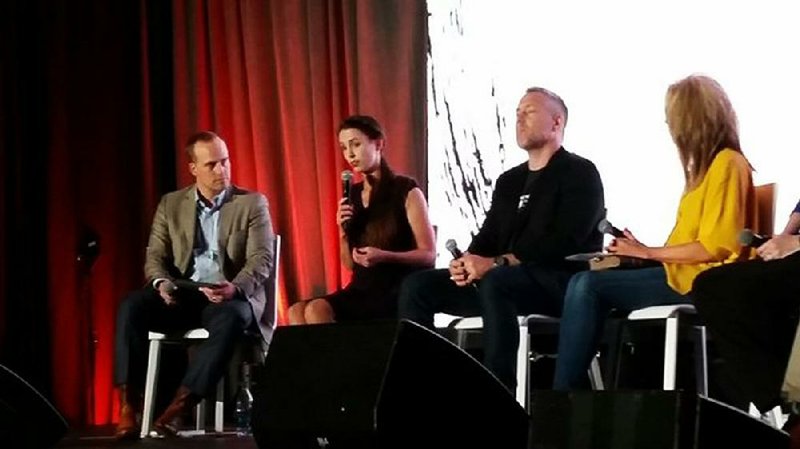 Rachael Denhollander (second from left) speaks out on sexual abuse in the Southern Baptist Church during a forum Monday in Birmingham, Ala. At left is Phillip Bethancourt, executive vice president of the Ethics and Religious Commission, the church’s faith policy arm. Southern Baptist Convention President J.D. Greear (third from left) and Susan Codone, a Birmingham native who was abused as a teen by a pastor at her Southern Baptist church, take part in the discussion. - Photo by Francisca Jones

BIRMINGHAM, Ala. -- Southern Baptists headed into the first day of their annual business meeting Tuesday under the cloud of widespread sexual-abuse allegations within the denomination.

But by the end of the day's meeting, each of their votes to approve three amendments were followed by bursts of applause.

The delegation voted to adopt two amendments recommended by the convention's executive committee that expand the definition of a cooperating church. One gives the convention the right to expel congregations that are willfully mishandling abuse; the second gives the convention the power to remove those that engage in discriminatory behavior based on race, a practice known in both instances as disfellowshipping.

A third approved amendment allowed for a credentials committee, the group that will have the power to make the decision on whether a Southern Baptist congregation is a cooperating church. This represents a sweeping change in a denomination whose congregations function autonomously.

"I believe this is a very, very significant moment in the history of the Southern Baptist Convention," the Rev. Ronnie Floyd said to extended applause. "I believe that every one of us need to thank God for this moment."

Floyd, who serves as president and CEO of the executive committee and was pastor of Northwest Arkansas' Cross Church from 1986 until May, a month after his election to the national convention, said Tuesday was the third time the convention has amended its constitution this century and that those amendments addressed critical issues of the day.

J.D. Greear, the convention's president, committed multiple components of this year's convention to addressing sexual abuse in the church. Shortly after being elected in 2018 to lead this year's convention, Greear commissioned a group of outside experts and church leaders to study sexual abuse in the church. A report released Saturday detailed findings including the acknowledgment of a long history of widespread abuse and the ways in which the church has failed the victims.

There are now 14.8 million members of the Southern Baptist Convention, the lowest number of members in the past 30 years, and Greear noted on Monday that 1 in 10 people under 35 have left the denomination's churches because of sexual abuse-related issues. Some Baptists worried that concerns about losing more members have been at odds with a willingness to face the issue of sexual abuse, and some have expressed skepticism that action won't follow the talk that change needs to happen.

The more than 8,100 delegates at the meeting approved the amendments two days after a report from The New York Times that detailed the mishandling of sexual-abuse allegations in a Southern Baptist megachurch in Texas.

Kathy Litton, a director for the Southern Baptist Convention's North American Mission Board, was elected by a razor-thin margin -- with 50.49% of the vote -- to be its next registration secretary, a role that requires her in part to handle and review delegation credentials, but which has a new dimension because of the vote to create the standing committee. She is the first woman in several years to serve in the role.

"For the past several terms, [the role] has been occupied by a brother who is a good, godly, faithful and qualified brother," said the Rev. Jimmy Scroggins of Florida while nominating Litton. "But because the issues facing us right now are so sensitive, and because this moment is so powerful, I believe it would be good to have a woman's voice to speak from this seat.

"[The vote] seems like almost a nonevent, it seems like a vote of little consequence -- but this year it really matters."

The votes followed on the heels of Greear's announcement Monday that the faith's public-policy arm, the Ethics & Religious Liberty Commission, and LifeWay Christian Resources have teamed up to create the Caring Well Initiative -- one that's dedicated to equipping churches to be a safe place and that cares for abuse survivors.

The commission is releasing for free to congregation leaders the video-based curriculum "Becoming a Church that Cares Well on Abuse," designed to train church leaders on related issues, such as how to handle disclosure and care for survivors.

"This is not a distraction from the mission," Greear said with regard to handling sexual abuse as a denomination. "This is the mission."

Rachael Denhollander, the first person to publicly accuse Olympic team doctor Larry Nassar of sexual abuse, said Monday during a panel discussion alongside Greear that words not followed by actions are worse than saying nothing at all.

"Where the rubber is going to meet the road is what the [convention] does [Tuesday]," said Denhollander, who spoke about the February report Greear released, which states that 10 churches were in danger of being expelled from the denomination for mishandling abuse.

Within days, seven of the churches were cleared by the convention's executive committee as not needing any review, a decision that Denhollander said was either the result of leaders being "not qualified to make this decision" or "an intent to undermine what [Greear] had done."

"There's great skepticism in the survivor community about how the [convention] is going to have to turn [into action] these grand words that we are speaking," Denhollander said.

Susan Codone, a Georgia college professor and fellow panel member, spoke for the first time publicly about sexual abuse she experienced from the age of 14 from a new youth pastor. Eighteen months into the abuse, Codone -- afraid to tell her parents about what was happening to her -- decided that she could trust the church's lead pastor.

When Codone spoke with the pastor, she was blamed, pressed for details about the abuse, and later silenced under threat of death, she said. The youth pastor who abused her went on to serve churches in Birmingham, Ala., until his death in 2017, she said.

Panel member Beth Moore, author and founder of Living Proof Ministries in Houston, likened the abuse she experienced from immediate family members to that occurring in the family she considers the Southern Baptist Convention to be.

"And what I want to say to my own family of Southern Baptists [is], our family is sick ... and it's got to change. Maybe you're not the abuser or the abused, but you're in a family where it's happening rampantly. Our family is sick; how do we get well?"