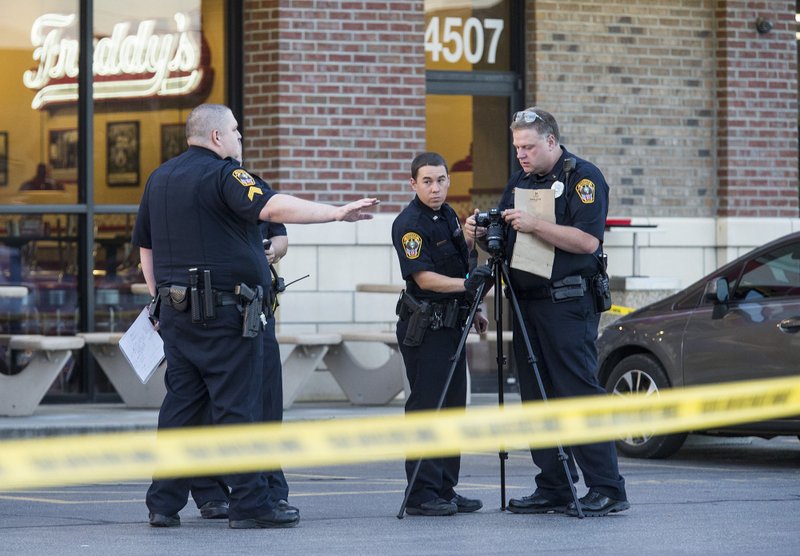 NWA Democrat-Gazette/BEN GOFF @NWABENGOFF Officers from the Rogers Police Department investigate a shooting Tuesday, June 11, 2019, at the Freddy's Frozen Custard &amp; Steakburgers in Rogers. Witnesses reported a male was shot in the leg during an altercation with another male in the parking lot, according to a press release from the department. The individual with the gunshot wound drove himself to Mercy Hospital and the shooter fled the scene, according to the release.

Keith Foster, Rogers Police Department spokesman, said Wednesday that Armando Almaraz has been identified as being involved in the shooting at Freddy's restaurant at 4507 W. Walnut St.

Almaraz is a 21-year-old Hispanic male, approximately 5-foot 7-inches tall and weighing around 115 pounds. He was seen driving a silver color BMW at the time of the incident and may be armed, Foster said.

Anyone with information regarding Almaraz’s location is asked to call Rogers police at (479) 636-4141.

ROGERS -- The Police Department was called to Freddy's restaurant, 4507 W. Walnut St., about 7 p.m. Tuesday for a shooting in the parking lot.

Police reported witnesses said two males got into an altercation in the parking lot. During the altercation one of the males was shot in the leg.

One of the males fled the scene. The male with the gunshot wound drove himself to Mercy Hospital for treatment, according to a news release from Rogers police.

"We do not believe there is a danger to the public and that this incident is isolated to the two subjects," said Keith Foster, police spokesman.

Detectives are continuing to investigate the incident.