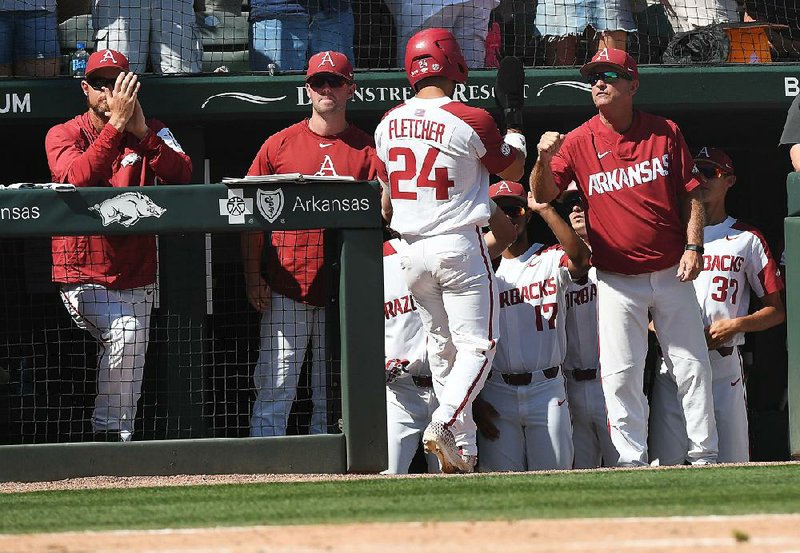 FAYETTEVILLE -- Scenes from another super regional championship played out all over Baum-Walker Stadium on a warm, breezy Monday evening that was perfect for the Arkansas Razorbacks and their fans to celebrate the first back-to-back trips to the College World Series in school history.

The players circled the fences of the home park that gives them such an overwhelming advantage, high-fiving and hollering with the nearly 11,000 fans who made Baum-Walker come alive again in a 14-1 rout of Ole Miss.

From Z (reserve catcher Zack Plunkett at the head of the line) to A (ace Isaiah Campbell at the end) the Razorbacks made the circuit, donning "Omaha Bound" caps, carrying "OmaHogs" signs and basking in the adulation of the faithful.

Catcher Casey Opitz, still wearing his gear after a 4-RBI day, was near the front of the group, pausing every now and again to roar into a camera or shout with glee.

Junior Dominic Fletcher, playing a key role yet again with his offensive and defensive prowess, was the linchpin on a covert Gatorade bath attack that partially soaked Coach Dave Van Horn. Moments earlier, Fletcher was caught on camera in mid-leap, a boyish grin splashing across his face, in a frog-like pose with his final destination the middle of a dog-pile with closer Matt Cronin at the bottom.

Game 3 heroes Cody Scroggins and Heston Kjerstad were in the middle of the maelstrom. During a brief pause in the frantic celebration, Scroggins called out, "Where's my momma? I want my momma."

Freshman Curtis Washington Jr., new to this OmaHog madness, jogged and jumped in a wide arc behind home plate, a GoPro camera strapped to his cap, appealing to the fans to continue making the scene. 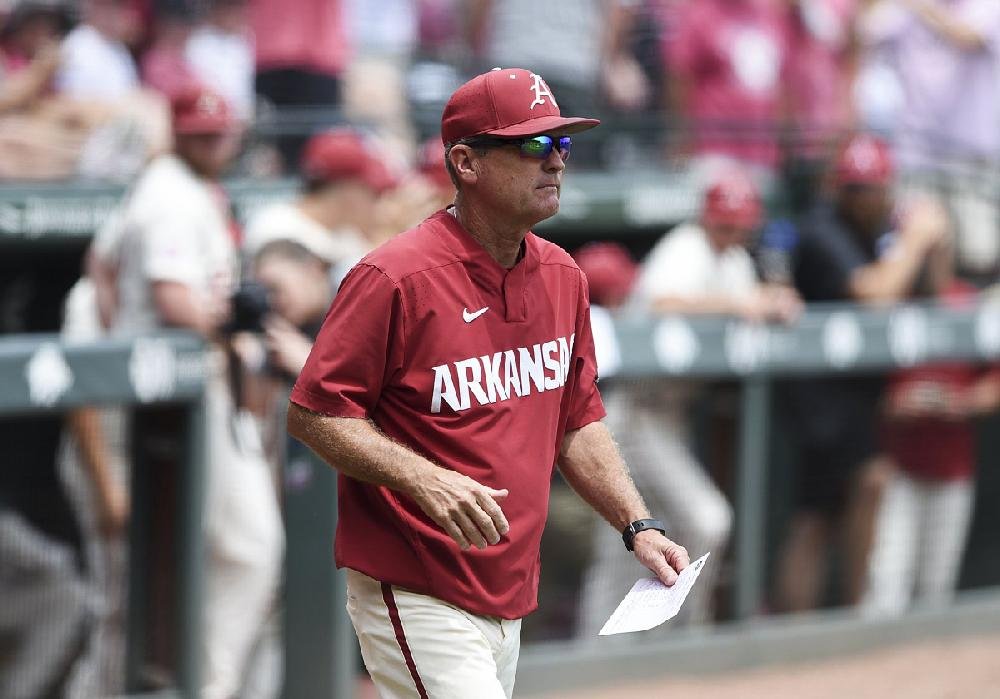 Arkansas Coach Dave Van Horn said the second game of a doubleheader against Auburn made an impression on him. “This team is talented enough to do some damage up there if we play together,” Van Horn said. “This is a team that from about the middle of the season on, behind closed doors, it was ‘Hey, I think we’re a little better than we thought.’ ”

The celebration lasted 15, 20, 30 minutes and the occasion -- the moments after the Razorbacks' 10th trip to the CWS was clinched -- never gets old.

"It's unbelievable," Van Horn said. "It's why you coach. It's why people love sports. It gets you away from the real world a little bit, and it's amazing what you can do with a little bit of hard work and a little bit of luck and a bunch of guys who believe.

"It's really gratifying. This has been an amazing season, I told the team that. I think this has been one of the most gratifying seasons I've ever had as a coach because we weren't expected to do much. We were picked 4th or 5th in the West, and the West is really good. I didn't feel like it was a slap in the face or that people didn't respect us."

Campbell, whose sturdy shoulders carried the pitching staff from end to end during this championship season, let loose big smiles and shouts of joy that he famously keeps tucked away beneath his calm exterior when he's at work on the mound.

Campbell was nearly hoarse from his exhortations, which started after his winning 8 1/3 innings in Saturday's 11-2 Arkansas victory over the Rebels.

"Day 1," Campbell said to describe when his vocal chords started to go. "I was yelling after I came out of the game. Then yesterday, just yelling.

"I wanted to get back to Omaha just as bad as anyone. Doing it back to back first time ever, it's just awesome."

Van Horn, as poker-faced as they come, beamed with delight after a brief team meeting near the pitcher's mound, which ended with him yelling, 'We're going back to Omaha!"

In the postgame, Van Horn shed some light on the moment he thought this team, which lost six of its nine position players and another two-thirds of its weekend starting pitchers, made a monumental impression on him.

That would be game two in a series at No. 15 Auburn, the week after Ole Miss had taken two of three at Baum-Walker and the same week that started with a 17-7 loss to the University of Arkansas at Little Rock and stretched to a season-high four-game losing streak with a 6-3 loss at Auburn.

In Game 2, the Razorbacks lost a 3-1 lead and rallied from a 4-3 deficit to tie it on Christian Franklin's RBI single that scored Fletcher in the eighth inning. Arkansas scored two in the 12th on a Trevor Ezell home run, but Auburn equalized in the bottom of the inning.

The Razorbacks finally won it with three runs in the 15th, on a Kjerstad home run and Matt Goodheart's two-run double.

"This team is talented enough to do some damage up there if we play together," Van Horn said. "This is the team that from about the middle of the season on, behind closed doors, it was, 'Hey, I think we're a little better than we thought, and they players are getting better.' They believed and they seem to really like each other and they play hard.

"I think about that second game of the doubleheader against Auburn. What a fight that was. [After that] I thought we were going to be a team to be reckoned with and the players proved me right."

Arkansas hitting coach Nate Thompson, 2 for 2 in trips to Omaha as one of Van Horn's top assistants, hugged wife Anna and daughters Nevaeh and Natalie in the happy aftermath.

"This is awesome," Thompson said. "Game threes are always stressful and when you can separate a little bit and just do what our offense did and do what our pitching staff did to start shutting them down there, you know, it makes you feel better and it takes a little bit of the edge off the game."

"This feels great," Hobbs said. "We get to play a legendary head coach in [Florida State's] Mike Martin. Our pitching staff is loaded and ready to go.

"It's awesome. I was one win away at Wake when we were down at Florida in a super regional. Getting a chance to go this time is really cool."

Stories of overcoming injuries and odds abound across the Arkansas roster, including the long road back to recovering his 97 mile per hour fastball for Scroggins, whose scoreless pitching for 4 1/3 innings on Monday opened the door for the Razorbacks to run through the Rebels with their relentless offense.

And then there's the stoic Ezell. The kid from Bryant who signed with Southeast Missouri State and suffered a back injury his junior year, allowing him a redshirt opportunity, which he parlayed into a final college season at the flagship school in his home state.

The same could be said for the rabid Razorback nation, which is eager to get back to the CWS finals for the second consecutive year, and this time return with a title.