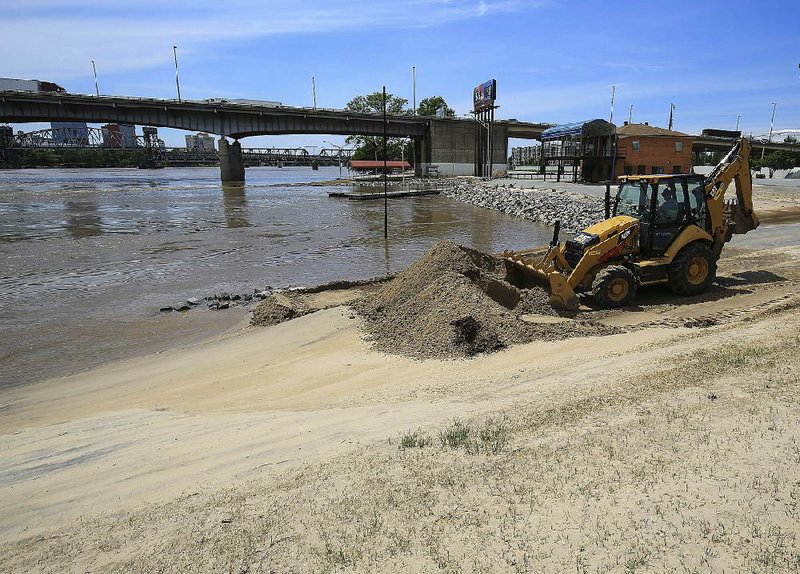 It will be several weeks before the Arkansas River is fully navigable within the state and for the U.S. Army Corps of Engineers to do a complete check of the locks and dams, officials said Tuesday.

Heavy rainfall in Kansas and Oklahoma led the U.S. Army Corps of Engineers to release water from reservoirs in both states that eventually made its way down the Arkansas River, leading to severe flooding throughout the Arkansas River Valley. Hundreds of homes and businesses were flooded as the water worked its way from western Arkansas through central Arkansas and into the southeast part of the state.

Gov. Asa Hutchinson has said the disruption in the state's river navigation system has caused an estimated daily loss of $23 million to the state's gross domestic product.

It might be several weeks before the river navigation system is fully operational, as only four of the 13 locks are operational right now, Corps spokesman Laurie Driver said.

"We already have Ozark in service and the Dardanelle lock never went down. But there is still some work to do," Driver said. "The Montgomery Point Lock and Dam and Norrell Lock and Dam 1 are also operational."

Debris that was carried down river by the floodwaters could potentially be left behind on the banks of the river or within river navigation equipment.

"During our cleanup process we will clean up as much debris as possible," Driver said. "We will check to see if there were any consequences to our equipment and assess our locks and dams, but we don't have any specifics yet."

The Tainter gates will also have to be looked at.

"It may take four to eight weeks to get all the locks repaired and looked at," Driver said. "No boats will be able to travel across the state, but some interstate travel can occur at the locks that are operational."

The Arkansas River is now below flood stage in all areas except Pine Bluff and Pendleton, but this means a lot of debris has been left behind on roads and in cities.

The Little Rock departments of Parks and Recreation and Public Works have ramped up efforts to clean up and repair streets and nearly 1,300 acres of parkland.

"We spent all of Saturday trying to get all the sand, mud and debris off those streets. We completed that on Sunday," he told city directors at their meeting Tuesday.

Honeywell said the department began work on cleaning up Rebsamen Park Road on Monday morning and was able to reopen it Tuesday afternoon.

He added that the public works team would be assisting the parks department in cleaning up recreation areas.

John Eckart, director of the parks department, said the department's initial focus would be opening the Arkansas River Trail. He said there was a lot of debris in Riverfront Park, Murray Park and on the grounds of the Clinton Presidential Center.

"The Clinton grounds has quite a bit of debris that we're working with their staff to get picked up," Eckart said. "Until the river goes down, we still have a lot of things unknown in Riverfront Park."

In western Arkansas, Travis Cooper with the Sebastian County office of emergency management said a debris removal plan has also been implemented in his area.

"So many things came with the flood waters," Cooper said. "There is a lot of limbs and trees in roads and ditches and a lot of sand and mud. There are also appliances lying around as well."

Burn sites have been established for vegetative debris and the Sebastian County Road Department has created dumpster sites.

"The Arkansas Department of Environmental Quality is allowing for the burning of only vegetative debris, so tree branches and things like that," Cooper said.

Fort Smith has also told residents to create three piles of debris at curbside, near the street.

"There is one for construction debris like sheetrock, drywall and stuff like that, an appliance pile for refrigerators and things and then a sandbag pile," Cooper said.

The Sanitation Department is also waiving disposal fees at the landfill for residents and contractors performing work for residents in flooded neighborhoods and areas of Fort Smith and Sebastian County. This benefit is to remain in place through June 29.

"You can haul anything and everything to the landfill," Cooper said.

The infrastructure built alongside the river also has a long way to go in the recovery process.

"We have been cleaning out interior infrastructures, trying to make them safe for utilities," Cooper said. "We have to make sure there are no safety hazards before the electricity can be turned back on."

The pallet and shipping business in Sebastian County also have to wait to see if the water will be navigable anytime soon.

The current flow of the river was measured at Rising Star Park near Pine Bluff and it was flowing at 400,000 cubic feet per second.

"It could be July or August before recreational travel is allowed on the Arkansas River," Driver said.

The industries on the river might be able to navigate the waters sooner because tugboats can travel when the river is moving at about 150,000 cubic feet per second, but it will still take time.

"It might be a while before the economy on river stabilizes," Cooper said. 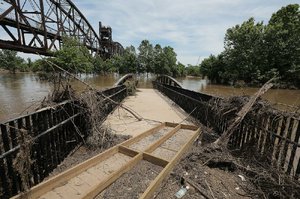 Photo by John Sykes Jr.
FILE — Debris is piled on and around the Cindy Coates Miller Bridge in the Clinton Presidential Park on June 11. The bridge had earlier been submerged by the floodwaters. 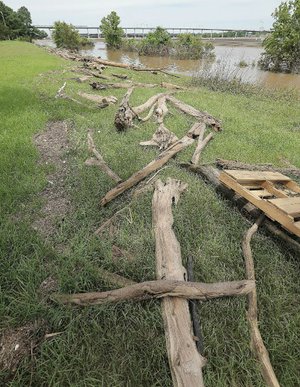 Photo by John Sykes Jr.
Logs and other debris litter the bank of the river just downstream from Murray Lock and Dam in Little Rock.