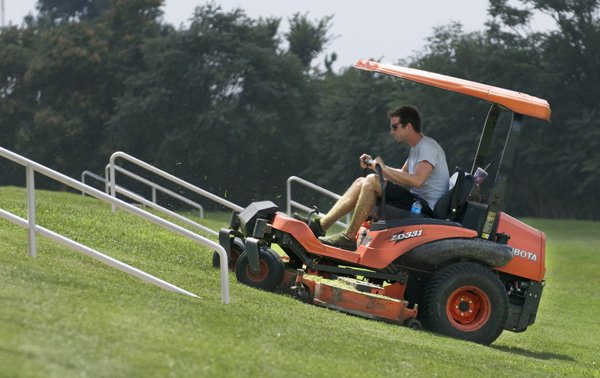 Richard Waggoner takes his mower up a small hill beside Tyson Middle School in Springdale in this file photo. - Photo by Spencer Tirey

The City Council on Tuesday tried to make sure nothing is missed by allowing staff of the Public Works Department to mow some places in the city.

• A $240,500 contract with Garver engineering to design alignment intersections of Park Street, at East Emma Avenue and Berry Street and Caudle Avenue and South Powell Street.

• A $153,000 increase in the contract price with Engineering Services for construction to cover the cost of an extension to the South 56th Street project. The street will continue south past Don Tyson Parkway, including intersections with New Hope Road, Willow Creek Drive and Johnson Mill Boulevard.

Money for both projects will be paid from the 2018 bond fund for streets.

For example, city workers might cut the grass in a drainage easement too steep or dangerous for an individual to cut without the proper equipment, said Brad Baldwin, director of engineering and public works. The council paved the way for the department to do more.

But that's not in the budget, said Baldwin.

In November, the city passed an ordinance requiring property owners and occupants to maintain their property to the center of the street. That means clear of tall grass, weeds, debris, limbs and more. This included strips of land behind fences but adjacent to a street the city mowed in the past.

City workers were overwhelmed last summer keeping grass mowed, Baldwin said. He said employees assigned to replace asphalt and clear drains in the summer were called away to cut grass throughout the city because the department couldn't cover it all.

Ron Findley, director of the Community Engagement Department, said fliers were sent in February to property owners affected by the change. But change comes hard, he said.

Property owners along Wagon Wheel Road, for example, resisted extra work required to trim around the trees the city planted when the road was widened. Council member Mike Overton specifically mentioned the city would mow this area as the change was discussed Tuesday night.

Baldwin said the 2019 budget was put together looking to this summer, when the city wouldn't be mowing those lands. Contract price for the mowing near the road wasn't included in the budget.

"We talked about the change, and didn't budget it," Baldwin said. "Now grass cutting season is well underway, and we don't have the money to cut that grass."

He said he is reviewing his budget and staffing to see if there is money available to hire contractors to mow the new locations.

The city does maintain some privately owned areas, Baldwin said.