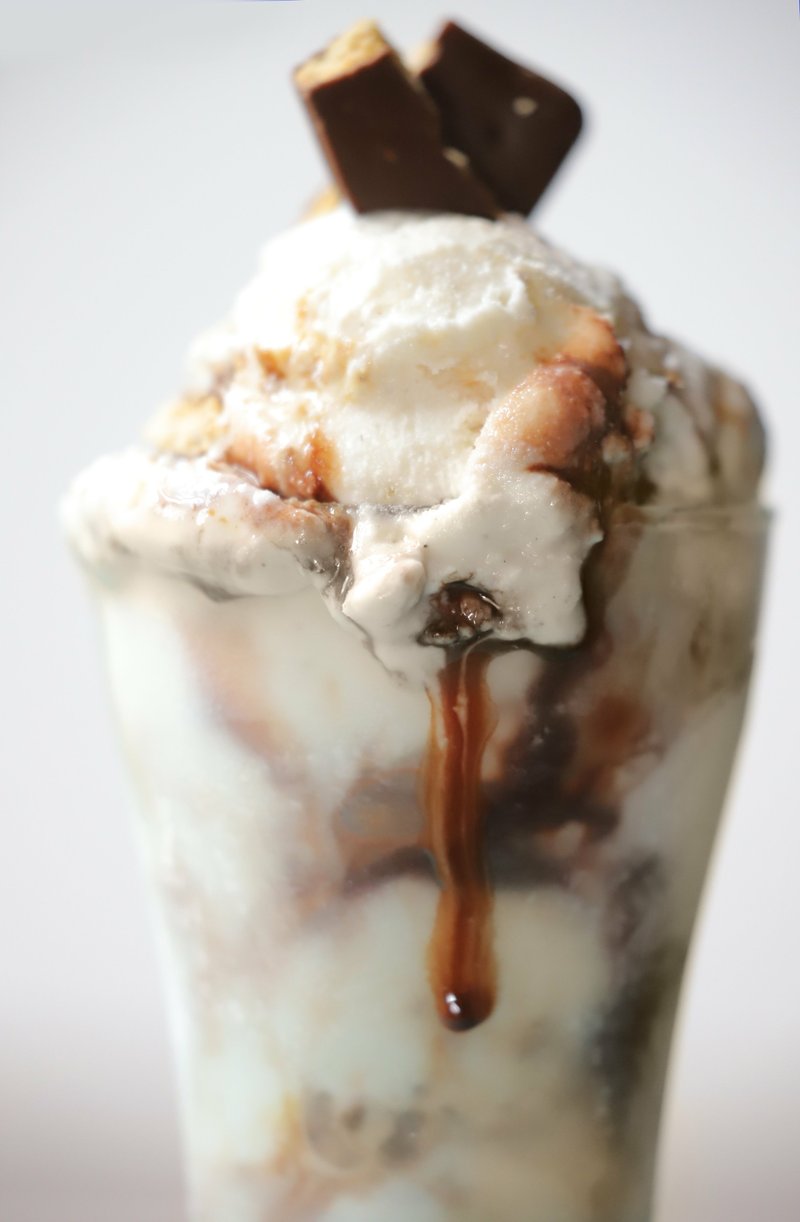 No one knows the name of the genius who first thought to combine a fire-roasted marshmallow, a chocolate bar and a graham cracker.

But we sure are grateful.

The combination of marshmallow, graham cracker and chocolate — think Moon Pies, scooter pies, Mallomars — has been an American staple for at least 100 years, according to food historians at foodtimeline.org.

S'mores, popularized by the Girl Scouts of America, take the combo to the next level with the introduction of fire.

Skewering a marshmallow onto the tip of a stick (or straightened wire coat hanger as was the method in my family) and slowly rotating it over a fire to achieve the perfect crust without creating a sugar inferno that blackens to an inedible blob is practically a rite of passage for American kids.

Early recipes for S'mores called the treat Some More or Some Mores and appeared in Girl Scouts of America recipe booklets as early as 1927.

8 sticks [for toasting the marshmallows]

Toast two marshmallows over the coals to a crisp gooey state and then put them inside a graham cracker and chocolate bar sandwich. The heat of the marshmallow between the halves of chocolate bar will melt the chocolate a bit. Though it tastes like "some more" one is really enough.

But there's more than one way to enjoy the gooey deliciousness of s'mores. The following take the classic flavors, deconstruct them and turn them into something new, yet familiar. Campfire optional.

This recipe has all of the flavors of s'mores — even the toasted marshmallow — in a scoop.

Line a rimmed baking sheet with parchment paper. Scatter the mini marshmallows over the parchment. Broil 1 to 2 minutes, watching carefully and rotating pan as necessary, or until marshmallows are light golden brown. Set aside to cool.

Line a large loaf pan with parchment paper. Spoon a third of the ice cream into the bottom of the pan. Top ice cream with a generous drizzle of fudge sauce, half of the crushed cookies and half of the marshmallows — you will have to scrape the marshmallows from the parchment using a metal spatula; it will be sticky! Repeat layers. Top with the remaining ice cream and another drizzle of fudge sauce. You will likely have some fudge sauce left over. You may have a cup or so of ice cream left over depending on the size of your loaf pan. Press a piece of parchment paper to the surface and freeze until solid, 3 to 4 hours.

In a heavy saucepan, combine the sugar, corn syrup, cocoa powder, a pinch of salt and ½ cup water. Stirring constantly, bring mixture to a boil; simmer, stirring, for 1 minute. Remove from heat and stir in the vanilla extract. Let cool slightly, then transfer sauce to a bowl or squeeze bottle and refrigerate until well chilled. 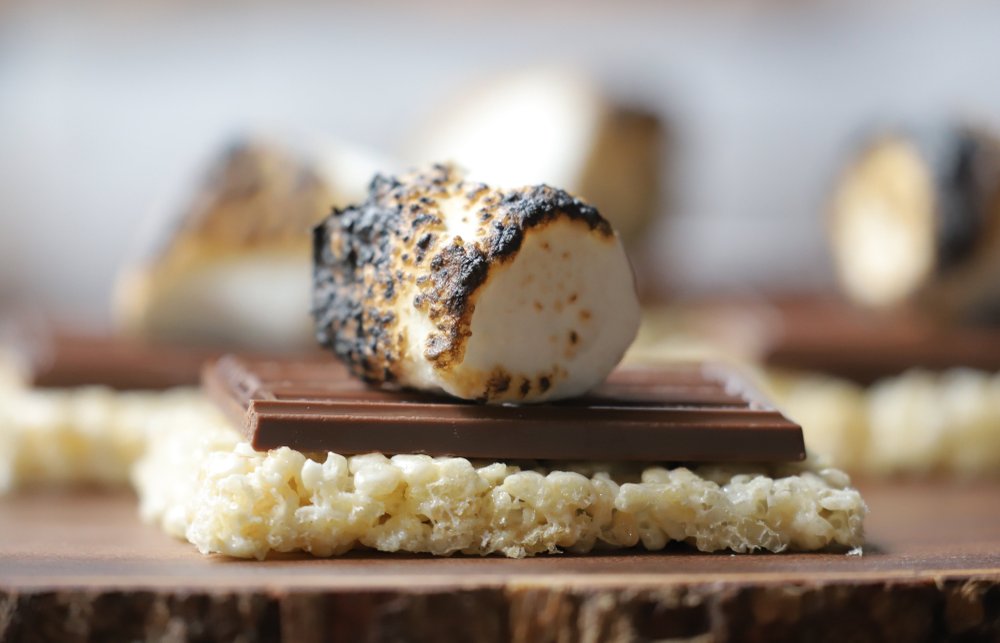 Here rice crispy squares stand in for the graham crackers, making these a gluten-free option everyone can enjoy.

2 tablespoons butter, plus more for coating

6 (1.55-ounce) milk chocolate bars, each broken in half to create a square

Line the bottom of a 9-by-13-by-1-inch pan with parchment paper. Generously coat paper with butter; set aside.

In a medium saucepan, melt the butter over medium heat. Stir in 20 of the marshmallows; cook, stirring constantly, until marshmallows are melted and mixture is smooth. Stir in cereal and mix until thoroughly coated. Turn mixture out onto the prepared pan. Generously butter your hands and press mixture into an even layer in the pan.

Arrange chocolate bars in a single layer over the crisped rice.

Using a skewer, toast the 12 remaining marshmallows to desired stage of charred gooey. Top each square of chocolate with a toasted marshmallow. 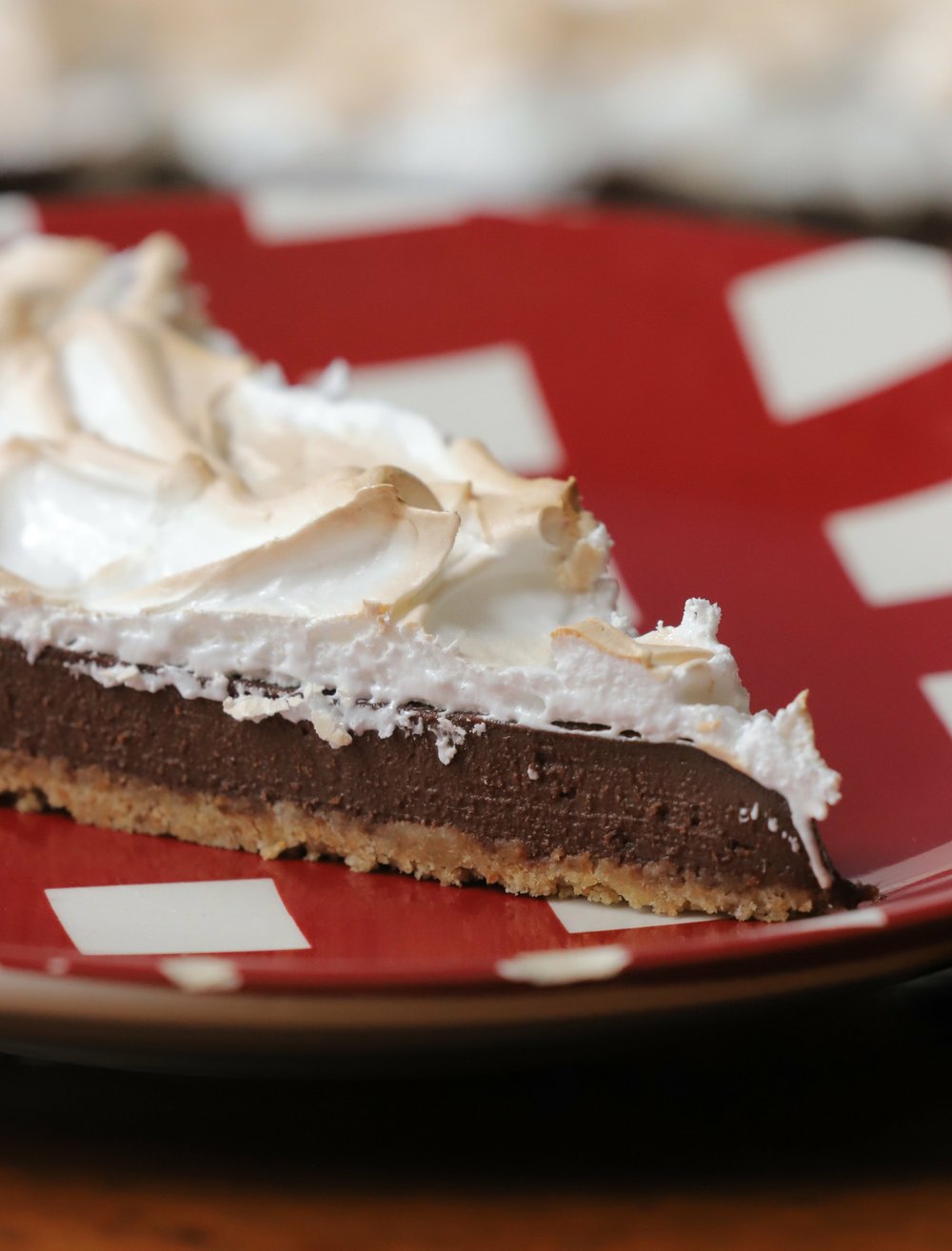 This sophisticated twist on the classic combines a rich, dark chocolate ganache with a graham cracker crust and toasted meringue.

In a food processor, pulse graham crackers to fine crumbs.

In a medium bowl, stir together the graham cracker crumbs and melted butter until crumbs are evenly moistened. Press mixture in an even layer in a 10-inch tart pan or a 9-inch pie plate. Refrigerate until firm, 30 minutes to 1 hour.

For the filling: In a small saucepan over medium low heat, or in the microwave dish, heat the cream until steaming.

Meanwhile, combine the chocolate and butter in a medium bowl.

Pour the hot cream and dissolved espresso over the chocolate and butter; add a pinch of salt and stir until chocolate is melted and smooth. Pour mixture over the chilled crust. Chill until filling is set, at least 1 hour.

Heat broiler or have ready a kitchen torch.

In a large bowl, beat egg whites with an electric mixer until frothy; add cream of tartar and continue beating until foamy. Gradually add the sugar, 1 tablespoon at a time, beating for 1 minute between each addition. Beat until mixture is glossy and forms stiff peaks. Spoon meringue over chilled filling, using the back of a spoon or an offset spatula to swirl meringue into decorative peaks. Using a kitchen torch or broiler, toast meringue until lightly browned, about 1 to 2 minutes under a broiler. If toasting meringue under the broiler, return the tart to the refrigerator for about 30 minutes before serving.

Note: If you don't have superfine sugar, make your own by whirling granulated sugar in a blender or food processor. 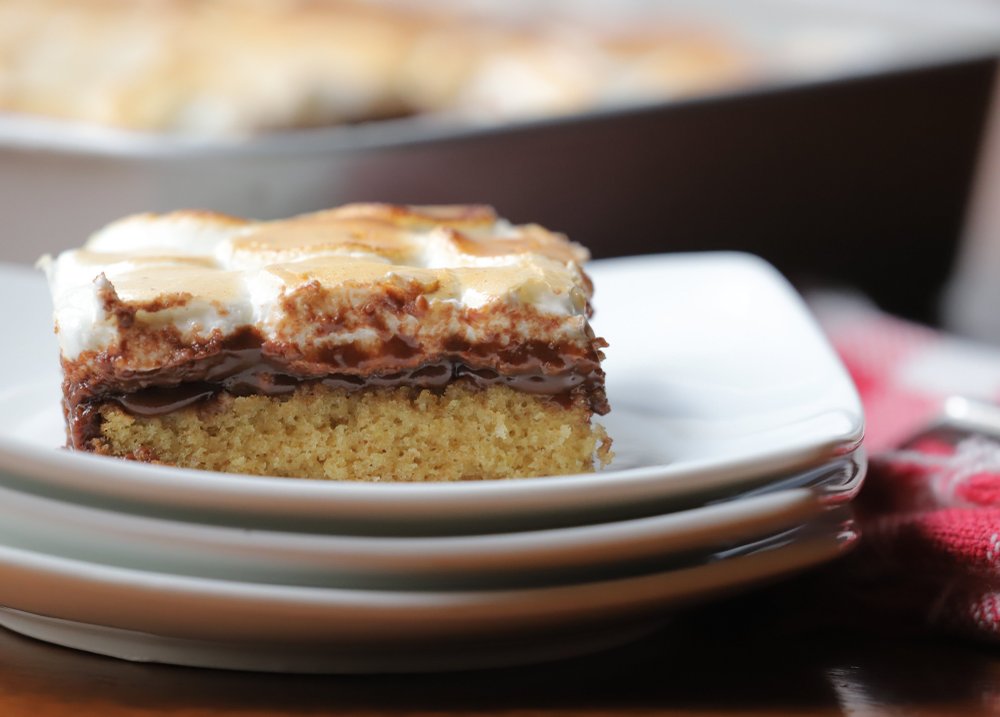 Here graham cracker-flavored cake is topped with fudgy frosting and toasted marshmallows for a ridiculously sweet treat ideal for a potluck or other gathering.

Heat oven to 350 degrees. Coat a 9-by-13-inch pan with baking spray or coat with butter and then dust lightly with flour; set aside.

In a bowl, whisk together the flour, graham cracker crumbs, and baking powder; set aside.

In a mixing bowl, using an electric mixer, cream butter and sugar until pale and fluffy. Add the eggs, one at a time, beating between each addition. Beat in the vanilla.

Alternating between each addition, add the flour mixture and the milk a little bit at a time. Mix just until combined.

Pour batter into the prepared pan; shaking or tapping pan on counter to spread batter evenly. Bake 25 minutes or until golden brown, rotating pan halfway through.

In a saucepan, combine butter, milk and cocoa; heat to boiling, stirring constantly. Remove from heat and stir in confectioners' sugar and vanilla. Mix until smooth. Immediately spread over cake.

Heat broiler or have ready a kitchen torch.

Using oiled scissors, cut each marshmallow in half and arrange them, cut side up, in a single layer over the frosting.

Place cake under broiler, or use a kitchen torch, to toast marshmallows. Our cake took about 1 ½ minutes, rotating every 30 seconds. 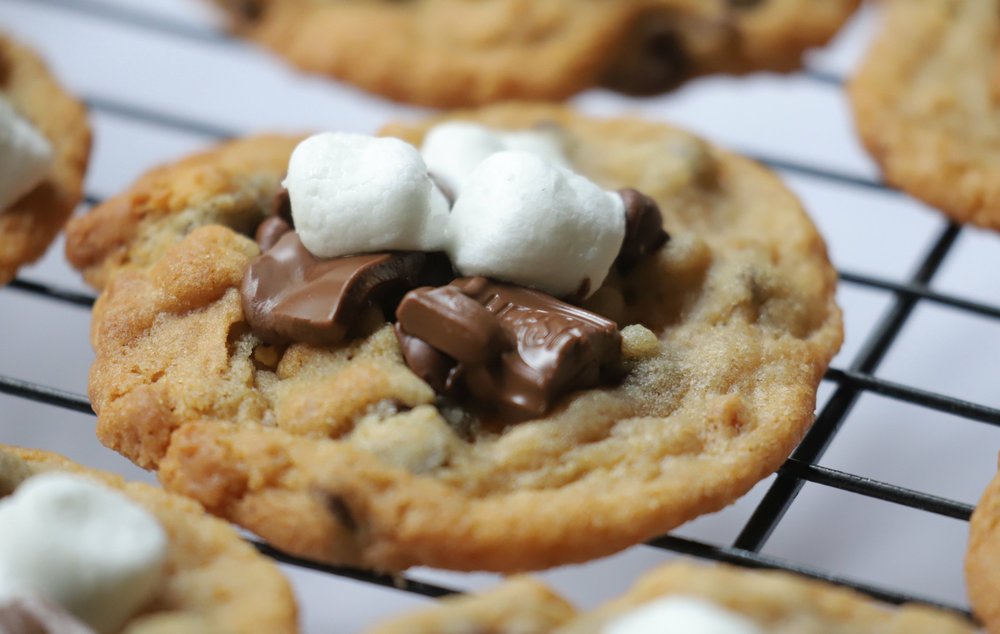 In a large bowl, beat butter or shortening and sugars with an electric mixer until light and fluffy. Add vanilla and eggs and beat well. Add the flour mixture and beat on low speed to combine. Stir in chocolate chips.

Drop dough by generous tablespoons spaced about 3 inches apart onto the prepared baking sheets. Bake 8 minutes, remove cookies from oven, top each cookie with about 3 marshmallows and 3 pieces of chocolate. Return baking sheet to oven and bake 2 to 3 minutes more.

Cool cookies on baking sheets for about 10 minutes, then transfer cookies to wire racks to cool completely.