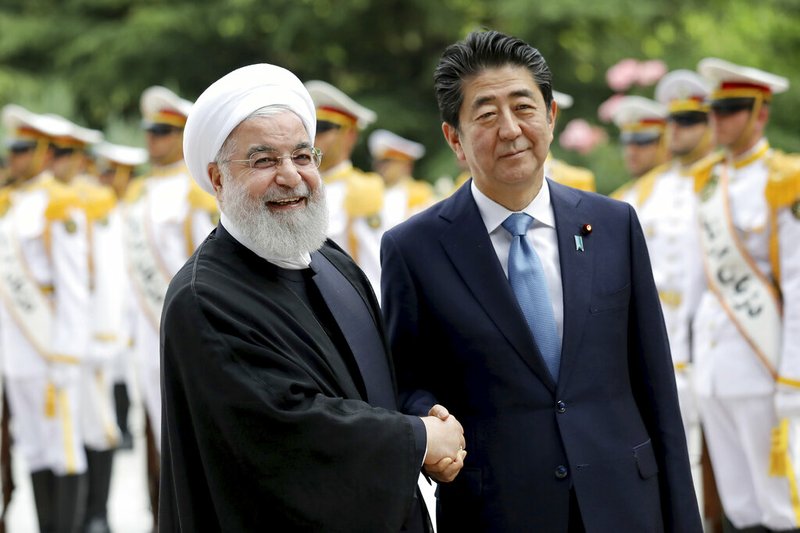 TEHRAN, Iran -- Japanese Prime Minister Shinzo Abe traveled to Tehran on Wednesday to warn that an "accidental conflict" could be sparked amid heightened tensions between Iran and the U.S., a message that came hours after Yemen's Iranian-backed Houthi rebels attacked a Saudi airport, wounding 26 people.

Abe's trip is the highest-level effort yet to de-escalate the crisis as Tehran appears poised to break the 2015 nuclear deal it struck with world powers, an accord that the Trump administration pulled out of last year. It's also the first visit of a sitting Japanese premier in the 40 years since the Islamic Revolution.

But success may prove difficult for Abe, as the Houthi rebel attack on Saudi's Abha regional airport underscored. Separately, the front page of the Iranian daily Farheekhtegan, or Educated, published Wednesday morning a picture of a mushroom cloud from a nuclear blast -- a reference to America's bombing of Hiroshima and Nagasaki at the end of World War II.

"How Can You Trust A War Criminal, Mr. Abe?" the newspaper asked in dual English and Farsi headlines. Hard-line news outlets in Iran immediately picked up the front page from the paper, published by students of Islamic Azad University, which has campuses across the nation.

"There is possibility of an accidental conflict and a military conflict should be prevented at all costs," Abe said.

Abe landed just hours after the attack in Abha. The Yemeni rebels, known as Houthis, said they launched a cruise missile at the Saudi airport while the kingdom said 26 people were hurt.

Though there were no fatalities, it was the largest number of civilians to be injured in Saudi Arabia as a result of an attack by the rebels since the start of the Saudi-led war in Yemen more than four years ago.

The rebels' Al-Masirah satellite news channel said the missile hit its intended target, halting air traffic at the airport in the town of Abha in the kingdom's southwest, some 100 miles from the Saudi-Yemen border. The war in Yemen, the Arab world's poorest country, has killed tens of thousands of civilians, with most of the deaths blamed on Saudi-led coalition airstrikes, and has pushed Yemen to the brink of famine.