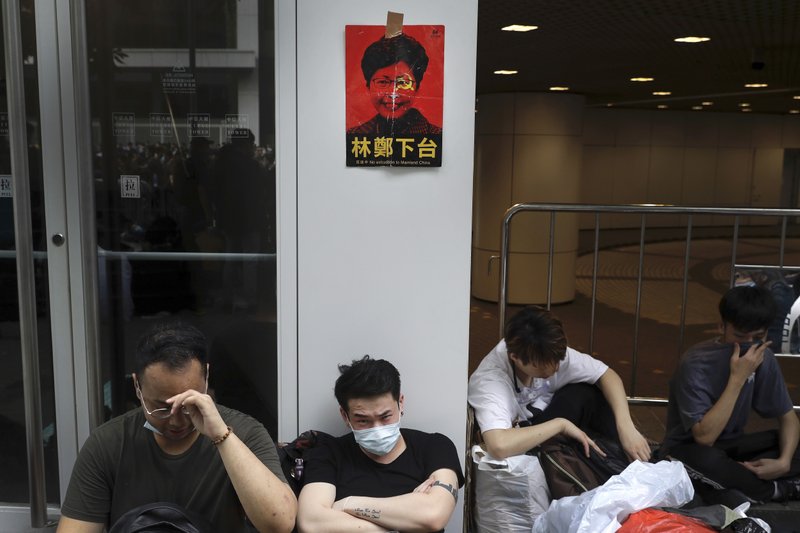 Protesters sit below a photo of Hong Kong's Chief Executive Carrie Lam with the words "Step down" stuck outside the Legislative Council in Hong Kong, Wednesday, June 12, 2019. (AP Photo/Vincent Yu)

HONG KONG -- Hundreds of protesters blocked access to Hong Kong's legislature and government headquarters today in a bid to stop debate on contentious extradition bill that would allow accused people to be sent to China for trial.

The overwhelmingly young crowd of demonstrators filled roads, overturned barriers and tussled with police in the Wan Chai district.

As the crowd of protesters swelled, police tried to push them back with water cannons and pepper spray. Some in the crowd unfurled convenience-store umbrellas. Others seized traffic signs and hurled them to the ground with a clatter.

Under the "one country, two systems" framework, Hong Kong was guaranteed the right to retain its own social, legal and political systems for 50 years after its handover from British rule in 1997. However, China's ruling Communist Party has been seen as increasingly reneging on that agreement.

The secretariat of Hong Kong's Legislative Council delayed the start of a legislative session on the bill. A statement from the government's press service said the session scheduled to begin at 11 a.m. Hong Kong time today would be "changed to a later time to be determined" by the secretariat. Council members would be notified of the time of the meeting later, the statement said.

The legislation has become a lightning rod for concerns about Beijing's increasing control over the semi-autonomous territory.

"We're young, but we know that if we don't stand up for our rights, we might lose them," said an 18-year-old protester who gave only her first name, Jacky, to avoid possible retaliation from authorities.

Police called in reinforcements and closed off access to the area around the Legislative Council and government headquarters.

They said some protesters were surrounding police and private cars in a tunnel and "threatening the lives of those who have been surrounded."

"This behavior has gone beyond the scope of a peaceful gathering," a statement said. "We call on those who surround the vehicles to leave as soon as possible, otherwise we will use appropriate force."

Hong Kong Chief Executive Carrie Lam has consistently defended the legislation as necessary to close legal loopholes with other countries and territories. The legislature's president, Andrew Leung, has scheduled a June 20 vote.

Critics say the extradition legislation would put Hong Kong residents at risk of being entrapped in China's judicial system, in which opponents of Communist Party rule have been charged with economic crimes or ill-defined national security offenses.

Hong Kong currently limits extraditions to jurisdictions with which it has existing agreements and to others on an individual basis. China has been excluded from those agreements because of concerns over judicial independence and its human-rights record.

Information for this article was contributed by Raf Wober and Sally Ho of The Associated Press, and by staff members of The New York Times.