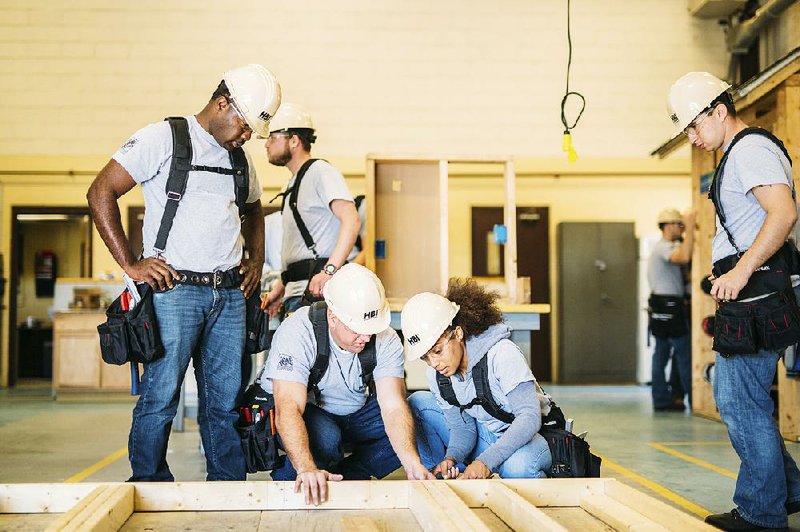 Students gain carpentry experience at a training session sponsored by The Home Depot Foundation the and Home Builders Institute this spring in Fort Stewart, Ga. The U.S. construction industry will need an additional 747,000 workers by 2026, the U.S. Bureau of Labor Statistics says.

FORT COLLINS, Colo. -- Lynn Osborne has been remodeling two homes. They are different styles, in different states, with different contractors. But there has been one constant: delays because of a shortage of skilled labor.

The two-year remodel of her primary home in Fort Collins was to update and upgrade the '90s house, and it included a small extension. It was completed last year, except for the landscaping, which is still underway.

That general contractor relied heavily on subcontractors, she said, and sometimes they wouldn't show, or would arrive days late, or did shoddy work and were fired.

Her remodel of an old family beach retreat in New England took a Sears kit home down to the studs. The completion date was June 2018, but it's still not done because the contractor, who has been doing most of the work himself, is stretched and inattentive.

"He'd say, 'I'll be out there next week,' and next week would turn into next month, and next month would be six months," she said.

Current estimates indicate there are about 300,000 unfilled jobs in the construction industry, and the industry is expected to need an additional 747,000 workers by 2026, according to the U.S. Bureau of Labor Statistics.

An August survey of nearly 375 association members found that almost two-thirds of the respondents said they had difficulties hiring skilled workers in the previous year, and nearly 70% felt the problem had gotten worse since 2016.

A look at 15 trades found shortages in them all, Darcy said in a telephone interview from association headquarters in Hackettstown, N.J. And as with previous years, he said, one of the greatest needs was for carpenters, who do rough-in work and framing, and finish carpenters, who hang cabinets, do millwork, flooring and install molding.

Finding a quality finishing carpenter was one of the biggest frustrations in Osborne's Fort Collins remodeling project.

"One guy got started on the basement and just left, so to find somebody to pick up where he left off was hard," she said.

The seeds of the current labor shortage were planted during the recession, when a lack of construction jobs prompted many workers to leave the industry.

"Not enough of them have returned to help us close the gap," Darcy said.

Compounding the problem is the graying of the remaining workforce, with the median age for a construction worker at 42.5 years, according to January figures from the Labor Bureau. It's estimated that for every five workers retiring from the industry, only one is entering it, said Silvia Lattoz, governance and global relations senior manager at association.

"There's definitely some kind of stigma tied to this," she said.

Players in the industry are ramping up efforts to address the impending problem, offering incentives to try to recruit new workers, especially young people, to the trades.

The Home Depot Foundation announced last year it was committing $50 million to skilled trades training, with plans to attract 20,000 people by 2028.

"We want to bring shop class back, from coast to coast," Shannon Gerber, executive director of the foundation, said in a release. The program focuses on supporting veterans, as well as underserved high schools.

Lowe's last year started offering employees tuition and other incentives to train for jobs such as carpentry, plumbing, and appliance repair. More than 1,350 associates were enrolled in the Track to the Trades program this spring, Lowe's spokesman Jennifer Weber said.

In April, Lowe's and 60 of its suppliers and partners debuted a new program called Generation T, an online marketplace for jobs, apprenticeships and education programs in construction. It's also on Twitter and Facebook.

"If we don't fill the existing skilled trade gap, our businesses, homes and communities will suffer," Weber said.

The National Association of Home Builders, meanwhile, sponsors student chapters in high schools and colleges. The clubs currently have more than 4,500 members.

The homebuilders' group also supports immigration changes. Foreign-born workers were twice as likely to be employed in construction last year as workers born in the United States, according to the Department of Labor.

Legislation pending in Congress would try to ease the construction worker shortage by establishing a visa system to bring in more foreign laborers. Employers would have to prove they couldn't find U.S. workers, and would have to pay fair wages based on local rates.

For a while at least, homeowners and homebuilders need to resign themselves to the fact that it will likely be harder to get work done, at least for a while.

Home Depot, for instance, said this year it was eliminating the service it had been offering that hired third-party contractors to install roofing, siding, insulation and gutters.

Osborne's husband previously worked in the construction industry, but even so, she said, they suffered sticker shock when it came to their renovations.

"It's that market right now," she said. "You want something done and they throw out a big number, and I guess it's a matter of, 'How badly do you want it done and how soon?"