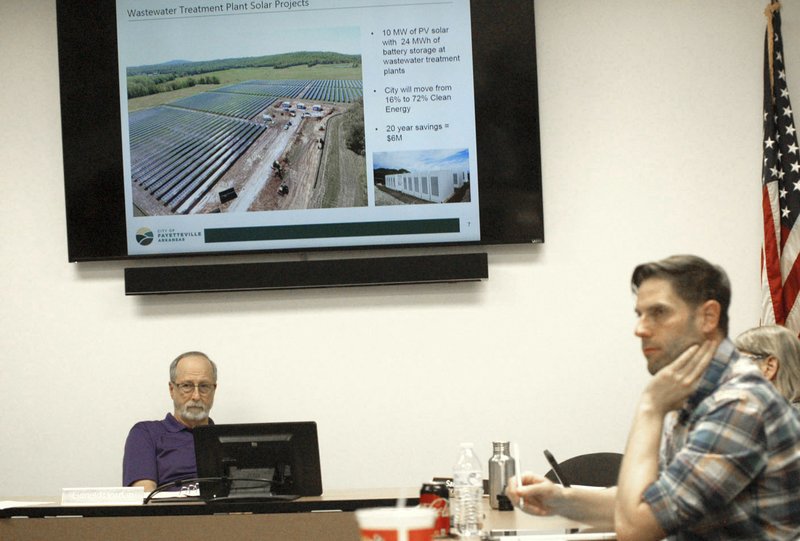 NWA Democrat-Gazette/STACY RYBURN Lioneld Jordan (left), Fayetteville mayor, and Kyle Smith, City Council member, listen Tuesday during a presentation of the city's energy and sustainability goals. The council gets an update every year in accordance with its energy action plan and recycling and waste diversion plans.

Also, citywide recycling rates have room to grow, according to department heads.

Compiling annual reports is included in the plans for energy use and recycling the city adopted in early 2017. The presentation covered last year.

The city government last year spent $4.1 million on electricity, natural gas and vehicle fuel, according to information from Peter Nierengarten, sustainability director. That's $469,037, or 13% more, than 2017.

However, energy use increased 1% over 2017, he said. The price for energy in general rose from 2017 to last year, causing the higher cost to the city, Nierengarten said. Fuel prices went up 20% and electricity and natural gas both went up 12%, he said.

The city's two wastewater treatment plants account for a majority of its energy consumption. Officials broke ground in March on a project to build 10 megawatts in solar power and 24 megawatt hours in battery storage for the two plants. Construction is planned to wrap in September.

The project will move the city from 16% to 72% clean energy once completed, Nierengarten said. The estimated cost saving is $6 million over 20 years, with a four-year return on the investment, he said.

Although the city is sitting at 16% of its goal to run entirely on clean energy by 2030, the figure will soon look different because of the solar panel project, Nierengarten said.

"I can guarantee by the end of this year, we're going to make a big dent in that," he said.

Last year was the fourth-warmest year on record in the United States, with extreme temperature fluctuation, Nierengarten said. Having more extremely hot days and extremely cold days shot up the use of thermostats, attributing to a 12% increase of energy use citywide, he said. Greenhouse gas emissions went up 7% from 2017 to last year.

Greenhouse gas emissions have stayed the same citywide since 2010, but with more people living in the city, that means per capita emissions have decreased 17%, Nierengarten said.

The rate of waste diverted from the landfill and collected for recycling is about 18%, which is about where it's been for several years, said Brian Pugh, the city's waste reduction coordinator. A number of the initiatives included in the 2017 recycling, diversion and waste reduction plan are being rolled out, and officials are trying to keep up with population growth, he said.

"I'd love to sit here and tell you that our diversion rate skyrocketed this year," Pugh said. "Unfortunately we're still at about 18, almost 19% diversion."

The amount of certain material collected for recycling went down or stayed the same last year from 2017. That was true of milk jugs, soda bottles and aluminum cans, for instance. The amount of cardboard and glass collected went up.

The city is collecting a smaller portion of material that could be recycled than it would like, Pugh said. For instance, officials estimate 11% of milk jugs and steel cans are being processed for recycling, he said.

Although the city is providing recycling end markets with quality material with its source-separated program, the value of the material has dipped drastically, Pugh said.

"It is what it is," he said. "I don't want it to go down any further, but from what I'm reading, it's going to get worse before it gets better."

To learn more about the city’s energy action plan go to:

To learn more about the recycling plan, go to:

The story was updated to correct a specific time period.