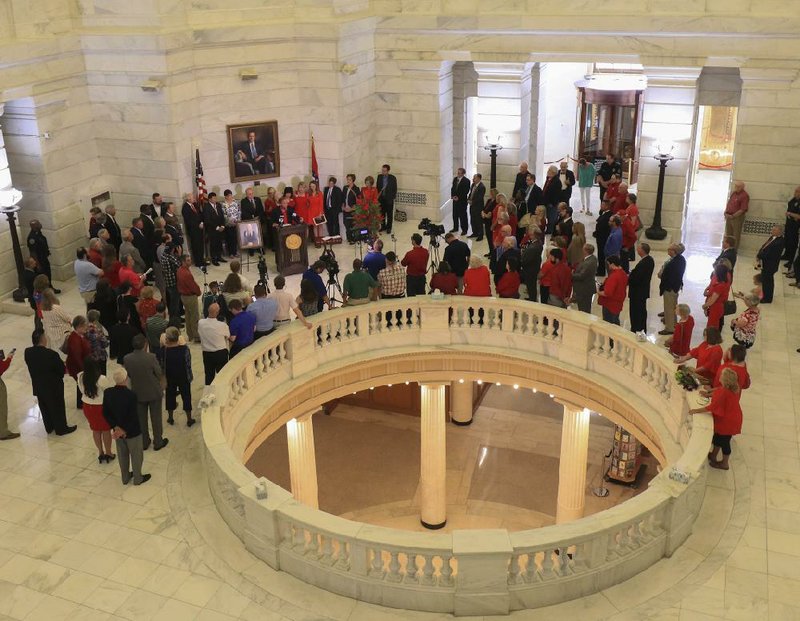 Sen. Gary Stubblefield speaks Tuesday during a remembrance ceremony at the state Capitol for former state Sen. Linda Collins of Pocahontas. Collins was found dead outside her home last week, and law enforcement agencies are investigating the case as a homicide. More photos are available at arkansasonline.com/612ceremony/. - Photo by Staton Breidenthal

The family of former Sen. Linda Collins of Pocahontas, whose body was found outside her home last week, said Tuesday that they "are surprised, upset, angered and saddened" by her death.

Collins' family is "at a loss for words in describing the feelings and emotions that we are currently going through," they said in a written statement read by her former spokesman, Ken Yang, at a remembrance event in the state Capitol rotunda that drew about 200 people.

Yang said the statement is from her father, Benny Collins; son, Butch Smith; and daughter, Kate Williams. They didn't attend the service.

Collins' family asked "for your understanding in being unable to speak about the ongoing investigation involving Linda Collins," according to the statement. Her death is being investigated as a homicide.

"We are confident that the Randolph County Sheriff's Department and the Arkansas State Police are using all resources available to find a resolution to this investigation and put our hearts and minds at ease," the statement said.

"Linda would want all of us to be strong for her during this trying time. Let us honor her memory, of all the wonderful things she said, and did for so many people, regardless of political views or otherwise."

"Please share only official news from the police and from the funeral home. Respect and honor Linda's memory. Remember her family when you start sounding off on social media [and], the media in general. It is a grave disrespect [by] the people that are dishonoring the memory of Linda. They should know better," he said.

Circuit Judge Harold Erwin signed off on a gag order a week ago that prevents the release of major material in the investigation. Prosecutors asked for the order.

State police spokesman Bill Sadler said Tuesday that "the homicide investigation remains active and special agents assigned to the case have devoted all available resources to the investigation."

A spokesman for the Randolph County sheriff's office said Tuesday that she had no additional information to report.

Collins married Philip Smith, now a retired circuit judge, in 1995, and the couple had two children who are now adults. They were divorced in October, according to court records. She was known as Collins-Smith, but Yang said she had started to go by Collins.

Collins served in the state House of Representatives from 2011-13 and switched from the Democratic Party to the Republican Party in August 2011.

At the Capitol, Collins was described as a God-fearing, passionate and hardworking lawmaker.

She recalled that Collins gave "this rousing speech" about the Second Amendment and protecting the lives of unborn children, and urged people to vote for her in the Democratic primary.

Irvin said her children looked at her in astonishment and said, "Mom, she just gave your speech." Irvin said they didn't understand why Collins was running as a Democrat. The two became friends that year. 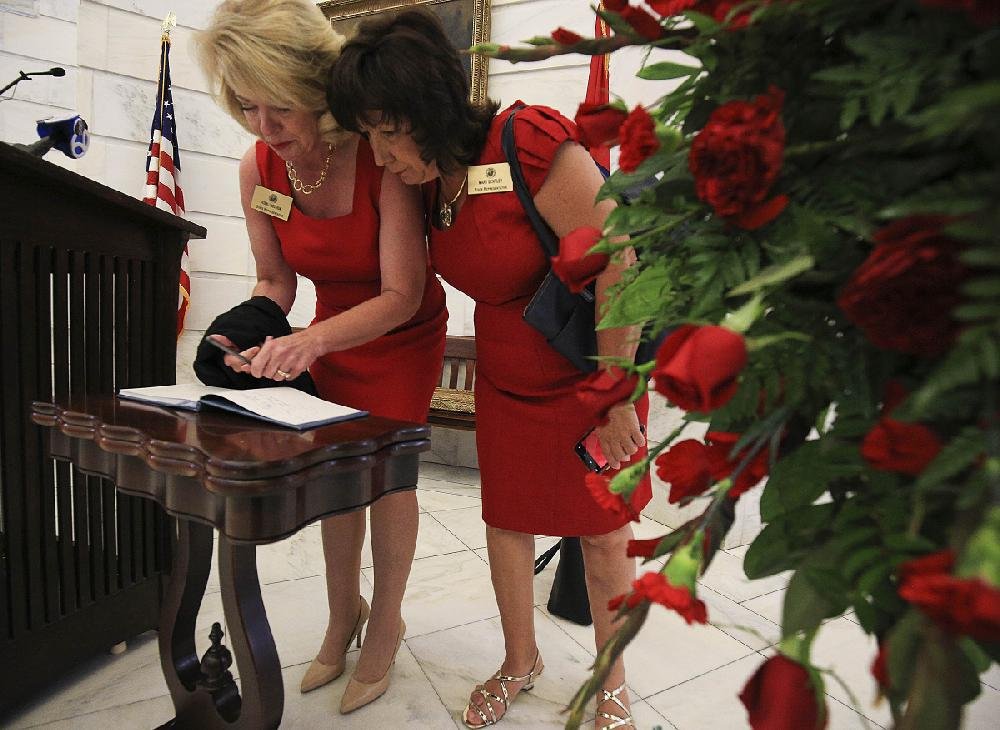 Reps. Robin Lundstrum (left) and Mary Bentley sign a guest book Tuesday before a remembrance ceremony at the state Capitol for former state Sen. Linda Collins of Pocahontas. Collins was found dead outside her home last week, and law enforcement agencies are investigating the case as a homicide. More photos are available at arkansasonline.com/612ceremony/.

She said Collins made a tough decision to leave the friends she made in the state Democratic Party to join the Republicans.

"This is what I will always remember most about her. She was true to her views because of the deep belief in God and in his words.

She was a Christian and she wasn't afraid to ruffle feathers to let you know about what his words said about that issue," Irvin said.

Sen. Gary Stubblefield, R-Branch, said he and Collins joined the House together in 2011 and had a lot of deep spiritual conversations.

"If she could stand here this morning ... [she'd say] 'you just keep fighting,' because she loved children, she loved the unborn, she could not stand injustice, she worked hard for justice," he said.

Erin Hogan of Little Rock, who worked for Collins during the 2017 legislative session, said, "Linda had a core set of values and knew who she was. ... She stood firm on them no matter the cost."

A memorial for Collins will be on the first floor of the Capitol through Friday, said Kerry Moody, a spokesman for Secretary of State John Thurston.