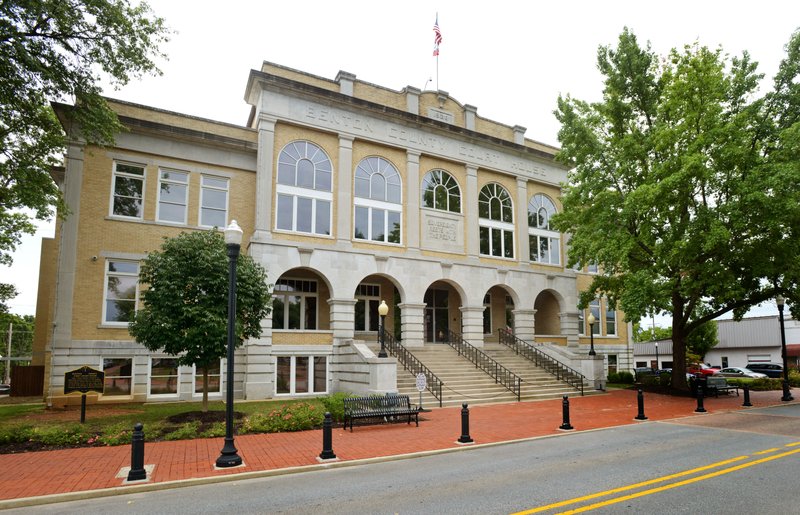 BENTONVILLE -- A lease-to-purchase plan and a smaller project are two courthouse options County Judge Barry Moehring presented to justices of the peace Tuesday.

Moehring shared five options with the Quorum Court Finance Committee on how the county can add space for courtrooms. Benton County's six circuit judges hold court in various buildings. The county will get a seventh judge in January 2021.

The county could again ask voters to approve a one-eighth percent sale tax increase, Moehring said. That proposal failed in March. The tax would have paid for an 87,000-square-foot, $30 million courthouse on Northeast Second Street. The tax would have been for 54 months, according to county documents.

Voters rejected a plan to build a downtown court facility at a March 12 special election. There were 6,055 votes against (62%) to 3,714 votes for (38%) a temporary sales tax plan, according to the certified results from the Election Commission.

Another option the county judge presented would also require voter approval. He said the county could get a long-term bond to pay for the courts facility. The county would have to pay more than $1.8 million yearly for a 20-year bond and $1.4 million for a 25-year bond.

The lease-to-purchase option would have another group pay to construct the building and the county would pay $1.7 million yearly to lease the building. Moehring said the lease itself is subject to annual renewal and appropriation. The county would own the courts facility after 25 years.

Moehring said no company or group has approached him about building the courts facility. "We haven't explored it very deeply," he said. "It's an intriguing idea, and we end up with ownership of the building."

The lease-to-purchase option has been explored the least, Moehring said.

The fourth option is to reconsider the Southwest 14th Street location near the county jail for the courts facility. The ungraded option at the site was $38 million and a building with a basement was estimated at $42 million.

Moehring told justices of the peace if they consider the Southwest 14th Street option then they should also consider the expanding the Benton County Jail.

Sheriff Shawn Holloway told the justices of the peace at the current pace the jail will need 596 additional beds if the growth continues at the same rate for in the next 20 years.

The final option is a downtown alternative includes continued use of the three courtrooms in the Benton County Courthouse. The old jail area behind the courthouse would be demolished and replaced by a building with four courtrooms. This plan would cost less than $15 million. A detention area and Benton County Circuit Clerk's Office would be on the first floor and two 1,700-square-foot courtrooms would each be on the second and third floors.

The prosecutor's office will remain on the first floor, but some of the staff will be moved to the second floor and use the space being used by the circuit clerk.

Circuit Judges John Scott, Robin Green and Xollie Duncan will remain in their current courtrooms while Circuit Judges Doug Schrantz and Brad Karren, along with the new judge will have courtrooms in the new building.

Green, Scott and Duncan could take turns using the fourth courtroom while the courthouse is being refurbished, Moehring said.

The county would put a parking lot with up to 70 spaces on Northeast Second Street at the site of the proposed courts facility.

Two of the buildings now used for court would be sold, and the money used to construct the new building.

The downtown building plan would keep some third-party support in place. The Walton Family Foundation has committed to donate $2 million if the courthouse is built downtown.

Sale of two of the courtroom buildings would net $2 million and the county could use $6 million from reserve. The remaining $2 million to $4.5 million needed could be financed in short-term debt, Moehring said.

Moehring believes the time is now to develop a plan for the court facility. He doesn't believe the $30 million cost of the courts facility in option one is an extravagant one. He said if they wait 10 years to build the facility the building may cost $40 million.

There's a possibility of doing this without a new tax or long-term debt, Moehring said.

Moehring said he wanted the guardrails on the cost of the project; how to pay for it and where it will go.

Moehring's options included a short-term outlook for the next few years from a long term plan beyond 2025.

"A county of our size and growth we need a proper courts facility," Moehring said.

The county has an immediate need with a new judge taking the bench in 2021.

Moehring plans for the new judge to use a small courtroom used as a juvenile courtroom. The space is being used by the prosecutor's office. The estimated cost to get the courtroom ready is $50,000 to $100,000. The courtroom has no jury box, so the judge will have to use another courtroom if he or she has a jury trial.

Michael Kalagias, chairman of the county's Libertarian Party, urged the justices of the peace to do away with the proposed courts facility in the failed tax increase.

Kalagias said it was time to come up with a current design that can get approved by voters.

Larry Mahoney, a Bentonville resident, said he favors a new courthouse, but he asked the justices of the peace to reconsider accepting money from Walton Family Foundation and totally publicly pay for the facility.

Justice of Peace Mike McKenzie said Moehring presented some viable options, but he was in opposition to the tax increase. McKenzie was against voting on the same plan with no changes.

He expressed interest in the fifth option.

Justice of Peace Joel Edwards said he was super excited by option five since there's no tax increase or long-term debt.

Justices of Peace Brent Meyers and Kurt Moore said they would like to see the option on the ballot again. Moore said option five is a good second plan.

Justice of Peace Tom Allen, who leads the committee, said it was a good presentation. He asked his fellow justices of peace about their favorite options.

Moehring will gather more information concerning the private option, then Allen will scheduled a special meeting to continue the discussion on the courts facility.

The next Finance Committee meeting will be at 6 p.m. July 9 in the Quorum Court Room.

Circuit court is held in various buildings in the city, including the annex building across the street from the courthouse and the building on Main Street. Juvenile court is held at the Juvenile Justice Center on Melissa Drive just off Southwest I Street. Case filings have increased in the county from 9,238 in 2014 to 11,785 in 2017, according to county information. Benton County has six circuit judges and will add a seventh in January 2021. The current courthouse was built in 1928.

The story was updated to correct the size of the courtrooms.