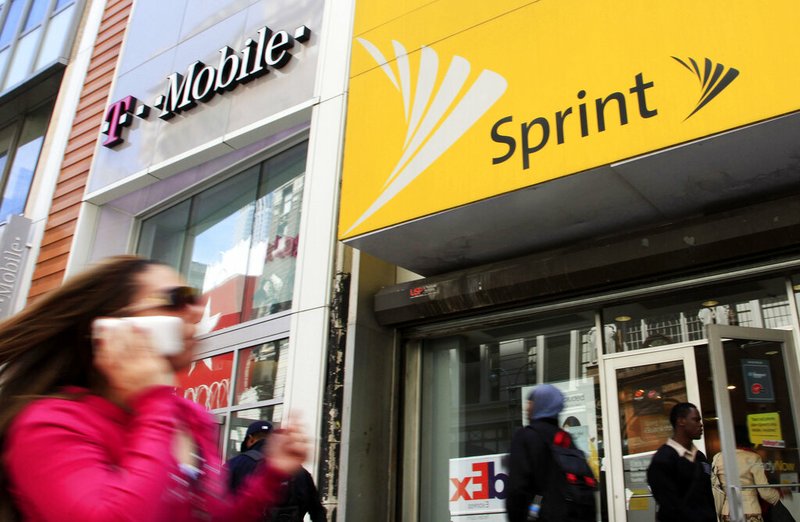 In this April 27, 2010 file photo, a woman using a cell phone walks past T-Mobile and Sprint stores in New York. Published reports say a group of state attorneys general are planning a lawsuit to block a $26.5 billion merger of wireless carriers T-Mobile and Sprint. It's an unusual step ahead of a decision by federal antitrust authorities. (AP Photo/Mark Lennihan, File)

The state attorneys general said the merger would hurt competition and drive up prices for cellphone service. They said the promised benefits, such as better networks in rural areas and faster service overall, cannot be verified, while eliminating a major wireless company will immediately harm consumers.

New York Attorney General Letitia James said in a statement that combining the two companies would "cause irreparable harm to mobile subscribers nationwide by cutting access to affordable, reliable wireless service for millions of Americans." She said the deal would particularly affect lower-income and minority communities in New York and other urban areas.

Other attorneys general joining Tuesday's lawsuit are from Colorado, Connecticut, the District of Columbia, Maryland, Michigan, Mississippi, Virginia and Wisconsin. All 10 attorneys general are Democrats. The lawsuit was filed in U.S. District Court in New York.

It's an unusual step by the state attorneys general ahead of a decision by federal antitrust authorities. The Justice Department's decision is pending. The Republican majority of the Federal Communications Commission supports the deal .

Amanda Wait, an antitrust lawyer and former Federal Trade Commission lawyer, said states could be suing if they expect the Justice Department to come to a different conclusion than they have reached.

One famous example of when the states and federal government diverged on a big antitrust case was in the fight against Microsoft, although that was not a merger case. Several states dissented from the Justice Department's settlement roughly 20 years ago.

T-Mobile and Sprint have argued that they need to bulk up to upgrade to a fast, powerful "5G" mobile network that competes with Verizon and AT&T. The companies are appealing to President Donald Trump's desire for the U.S. to "win" a global 5G race.

Consumer advocates, labor unions and many Democratic lawmakers worry that the deal could mean job cuts, higher wireless prices and a hit to the rural cellphone market.

T-Mobile and Sprint announced the deal more than a year ago, saying their combined pocketbooks and holdings of "spectrum," or the airwaves that carry cellphone signals, could result in a better 5G network than what either company could build on its own. It's an assessment several Wall Street analysts have agreed with. The U.S. is in a politically sensitive race with China to be on top as this technology is developed and implemented.

The two companies previously tried to combine during the Obama administration but regulators rebuffed them. They resumed talks on combining once Trump took office, hoping for more industry-friendly regulators.

T-Mobile has a reputation for consumer-friendly changes to the cellphone industry. T-Mobile and Sprint led the return of unlimited-data cellphone plans, for example. T-Mobile, trying to reassure critics, promised the FCC it would build out a 5G network and invest in rural broadband on a specific timeframe or pay penalties. It also promised to sell off Sprint's prepaid Boost Mobile brand and keep price increases on hold for three years.

That was enough for FCC Chairman Ajit Pai to back the deal. The other two Republican commissioners indicated they would join him to seal the agency's formal approval for the deal, which is still pending.

Public-interest advocates said these conditions did not address the deal's main criticisms -- higher prices in the long run and less wireless competition-- and would be difficult for regulators to enforce.

The Justice Department evaluates deals using stricter criteria than the FCC's "public interest" standard -- namely whether they harm competition and raise prices for consumers. Staff attorneys at DOJ have reportedly told the companies they won't approve the deal as proposed, but the ultimate decision lies with Makan Delrahim, the top antitrust official who was a political appointee.