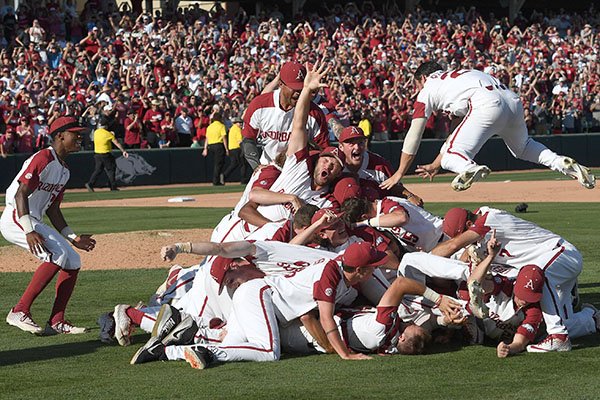 Arkansas players celebrate after defeating Ole Miss 14-1 in Game 3 of the NCAA Fayetteville Super Regional at Baum-Walker Stadium on Monday, June 10, 2019, in Fayetteville.

The Razorbacks beat Ole Miss in a three-game series for the first time since 2015, and Arkansas' timing couldn't have been better.

The Razorbacks couldn't have had much more fun doing it, either.

Arkansas pounded the Rebels 14-1 on Monday in the winner-take-all NCAA super regional third game before an announced crowd of 10,095 at Baum-Walker Stadium.

"We were pretty flawless."

The No. 5-ranked Razorbacks advanced to the College World Series for the second consecutive season and 10th time overall.

"Unfortunately, we had to come here and play the team that maybe will win the national championship, and certainly one of the best teams in the country and in an unbelievable environment," Ole Miss Coach Mike Bianco said. "Obviously, today it was all Arkansas in every phase of the game."

Arkansas will play in the College World Series in back-to-back years for the first time.

"What a great win for our program, the state, the university -- I could go on and on, the fans -- for us to get back to Omaha for the second year in a row," Van Horn said. "It's hard enough just to get there once every now and then.

"But to get there two years in a row with a bunch of guys that watched on the side last year or maybe weren't even with us. What a thrill for me as a coach to be a part of this and to watch these guys celebrate."

"The first game was all them, the second game was basically all us," Ole Miss left fielder Thomas Dillard said. "I thought today was going to be more of a dogfight.

"But they got out to an early lead, made a few better swings than us. They just kept adding on. You've got to give it to them. They just didn't stop. I think that's what a good offense does. When you get up, you just keep going."

The Razorbacks will open the College World Series against Florida State on Saturday or Sunday in Omaha, Neb. FSU advanced by winning its super regional at LSU.

Ole Miss had won three consecutive regular-season series against Arkansas, including two at Baum-Walker Stadium in 2017 and this season. The Rebels were 11-5 against the Razorbacks since 2016 going into Monday's game.

"It's just awesome to win that game three and send us back to Omaha this year," said Arkansas sophomore right fielder Heston Kjerstad, one of three returning starters from last season's national runner-up team. "It's been a fun year with all the guys, and you know it's taken everybody on the team.

"The whole roster. Everybody's contributed. That's why we're a team."

The Razorbacks got contributions throughout their lineup and from their bullpen to dominate Monday's game.

Kjerstad and catcher Casey Opitz each had four RBI to lead a 12-hit attack. Opitz was 3 for 3 with a home run, and Kjerstad went 3 for 4 -- including a home run and 2 doubles. First baseman Trevor Ezell went 3 for 5 with 2 RBI.

"You could kind of tell we were clicking throughout the lineup," Opitz said. "When we do that, we're something special because everyone's contributing and it's hard to pitch to us."

The 13-run margin was the Razorbacks' second most-lopsided victory over Ole Miss. They beat the Rebels 18-4 in 1996.

"They were on every fastball that we threw going in or out and forced us to throw a lot of breaking balls," Rebels catcher Cooper Johnson said. "When everyone is swinging well and you start stringing hits together, the confidence just starts to build and build."

"Electric arms," Dillard said of Arkansas' relievers. "They're running guys out there that can all hit 95 [miles per hour] and above, and they were all locating today, too."

Kjerstad started the rally with a one-out double on a line drive that Dillard couldn't catch on a diving attempt. Hoglund then hit Jack Kenley with a pitch.

Opitz's single up the middle scored Kjerstad and sent Kenley to third base. Jacob Nesbit doubled down the left-field line to drive in Kenley and advance Opitz to third. After Christian Franklin struck out, Ezell hit a two-run single to make it 4-1.

The Razorbacks extended the lead to 7-1 in the third inning. Hoglund gave up a single to Matt Goodheart, walked Dominic Fletcher and was replaced by Austin Miller.

Kjerstad greeted Miller with a two-run double, advanced to third on a flyout by Kenley and scored on an Opitz single.

Arkansas added a run to make it 8-1 in the fourth inning when Franklin walked, stole second base, went to third on Ezell's single and scored on a passed ball.

"The truth of the matter is that we needed some length to get through the game," Bianco said of not taking Hoglund out earlier. "The second inning, I thought a huge at-bat to turn the game was Nesbit with a 1-2 slider that Coop actually went down to block and he smokes it down the left-field line.

"Then Ezell's at-bat with two strikes, he gets a big base hit. They're that type of offense, a momentum offense. After that, we really didn't have an answer for them."

Arkansas and Ole Miss were among six SEC teams in the super regionals.

"You know, just playing in the SEC, you're ready for this moment," Opitz said. "You can kind of tell with all these SEC teams in these supers, when you go throughout that grind in the regular season, then you're ready for these moments."