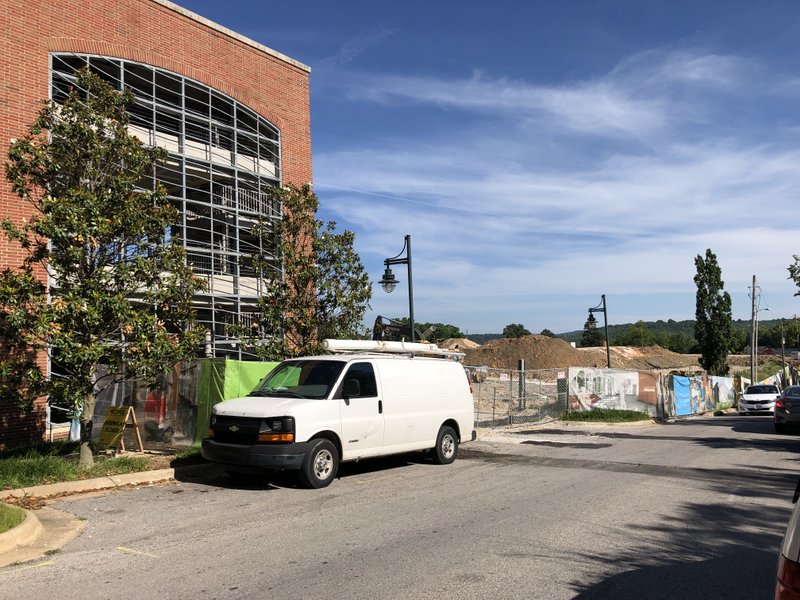 NWA Democrat-Gazette/STACY RYBURN The west side of the Fayetteville Public Library is seen Monday facing construction for the facility's expansion to the south. The Planning Commission considered a rezoning request west of the library.

FAYETTEVILLE -- A rezoning that could allow restaurants, shops, homes, offices and other uses next to the Fayetteville Public Library passed the Planning Commission Monday and will go before the City Council.

Commissioners unanimously passed the request for two lots southwest of the library near West Avenue and Rock Street. The lots are at 119 and 127 S. West Ave., and have two homes on them, one built in 1886 and another in 1916, according to Washington County records. Combined, the lots make up less than half an acre.

To learn more about the zoning district proposed next to the Fayetteville Public Library, go to:

W. Cal Canfield, a local architect and builder, referred to his idea for the lots as the Rainey Street concept. Rainey Street is a historic neighborhood and entertainment district in downtown Austin, Texas.

Canfield said it was his intention to bring a mix of commercial and residential uses similar size and scale with the neighborhood. He said his request was inspired by the development of the cultural arts corridor downtown and the library's expansion that's under construction.

"I see no reason why we can't maintain the residential quality of the neighborhood while still valuing the diversity of added services and benefits to those who occupy the area," Canfield said.

Voters in April approved construction of the arts corridor, which will involve turning the Fay Jones woods west of the library into a nature attraction and building a civic space at the southwest corner of Dickson Street and West Avenue. Voters in 2016 also approved expanding the library by more than 80,000 square feet.

The lots under the request would change from a strictly residential district to one called main street center. That zoning district allows a wide variety of uses, including all kinds of residential to eating places, studios, hotels, motels and cultural and recreational facilities.

Under the proposed zoning, a building of up to five stories is allowed if it's within 15 feet of the front property line. A seven-story building is allowed in the back of the lot, farther than 15 feet, according to city code. Building height maximum is three stories under the current zoning.

During the library's board meeting, which was held before the Planning Commission, Executive Director David Johnson stressed concern about the possibility of a large building obstructing the view to the west.

"I don't think a five-story facility is what we are looking for," he told the board.

Planning Commissioner Leslie Belden said she supported the ideas Canfield shared, but reminded commissioners a different property owner could build up to a seven-story building if the lots were ever sold.

Commissioner Zara Niederman said the rezoning would encourage a variety of possibilities that would incorporate both the street and the trail on the west side of the lots in their design.

The City Council will make the final decision on the rezoning.