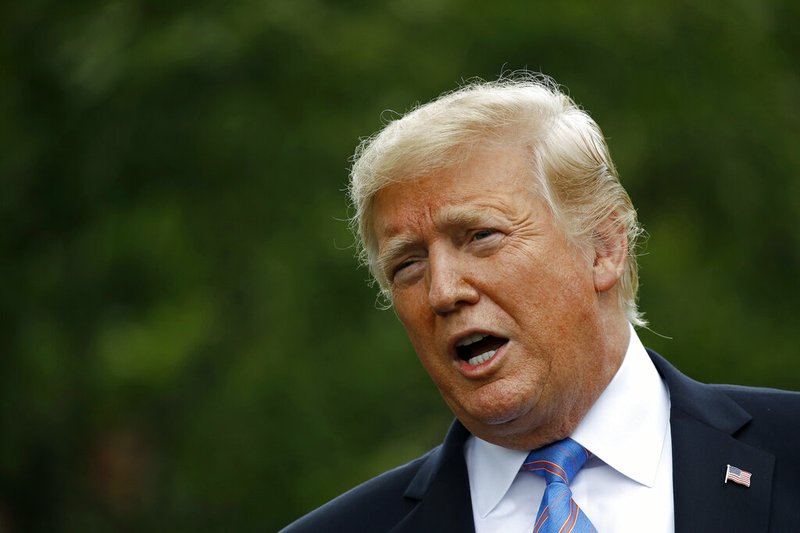 President Donald Trump speaks on the South Lawn at the White House, Monday, June 10, 2019, in Washington as he honors Team Penske for the 2019 Indianapolis 500 win. (AP Photo/Patrick Semansky)

WASHINGTON -- Mexico's foreign minister said Monday that no secret migration deal existed between his country and the United States, contradicting President Donald Trump's claim on Twitter that a "fully signed and documented" agreement would be revealed soon.

Marcelo Ebrard, Mexico's top diplomat, said at a news conference in Mexico City that there was an understanding that both sides would evaluate the flow of migrants in the coming months. And if the number of migrants crossing the U.S. border is not significantly reduced, he said, both sides have agreed to renew discussions about more aggressive changes to regional asylum rules that could have a bigger effect.

"Let's have a deadline to see if what we have works and if not, then we will sit down and look at the measures you propose and those that we propose," Ebrard said, describing the understanding reached by negotiators last week.

Trump has insisted for several days that the agreement reached with Mexico on Friday evening is a strong one, rejecting criticism that it largely called upon Mexico to take actions that it had already agreed to months earlier.

In a Twitter post Monday morning, he said: "We have fully signed and documented another very important part of the Immigration and Security deal with Mexico, one that the U.S. has been asking about getting for many years. It will be revealed in the not too distant future and will need a vote by Mexico's Legislative body!"

U.S. officials said Monday that what Trump appeared to be referring to was the agreement in principle to revisit the migration situation, and they said it gave the United States strong leverage over Mexico to live up to its promises. The numbers will be reviewed in 45 days and again in 90 days, officials said.

That was the understanding described by Ebrard, that if the numbers of migrants have not been substantially reduced, then Mexico will discuss regional asylum changes that it has resisted for years. One of those ideas, the "third safe country" arrangement, could eventually give the United States more legal authority to turn asylum seekers away at its southwestern border.

In his news conference, Ebrard said the United States continued to push for a "third safe country" agreement but that Mexico was proposing a regional asylum agreement, one that would review the flow of migrants across Mexico and Central America, with a number of different countries, including Panama and Brazil.

But Ebrard said an agreement on asylum changes -- which does not yet exist -- would have to be approved by the Mexican Senate before it could go into effect. He said the agreement announced Friday effectively delayed that discussion, giving Mexico time to prove to Trump that it would help reduce the flow of migration.

A regional asylum compact like the one Ebrard described could have major implications for asylum seekers, said Sarah Pierce, an analyst at the nonpartisan Migration Policy Institute.

"While in theory such an agreement would share the burden of refugee flows across several countries, in reality it could significantly worsen the current situation if the designated countries are unable or unwilling to properly accept and integrate the migrants," she said.

Over the weekend, Trump also claimed another new element of the deal, tweeting in all capital letters that Mexico had "agreed to immediately begin buying large quantities of agricultural product from our great patriot farmers!" The administration has yet to reveal the details of any such provision, and Mexican officials say no agreement on farm goods was reached as part of the talks.

Ebrard told reporters that the talks had focused on migration, not commerce, and he hypothesized that Trump was calculating an economic boost resulting from his decision not to implement the tariffs.

"We do not have a specific agreement on products of that nature," he said.

Also on Monday, Trump defended his administration's decision to threaten trading partners such as Mexico with tariffs, calling such duties a "beautiful thing" and asserting that a trade deal with China was close because of his aggressive policies.

"People haven't used tariffs," Trump said in an interview with CNBC, "but tariffs are a beautiful thing when you are the piggy bank, when you have all the money -- everyone is trying to get our money."

Trump said his threat of tariffs on Mexico showed that his approach was working and would ultimately persuade China to agree to U.S. trade demands.

"As soon as I put tariffs on the table," Trump said of his negotiations with Mexico, "I was done. It took two days."

Information for this article was contributed by Michael D. Shear, Maggie Haberman and Katie Rogers of The New York Times; and by Jill Colvin, Colleen Long and Maria Verza of The Associated Press.