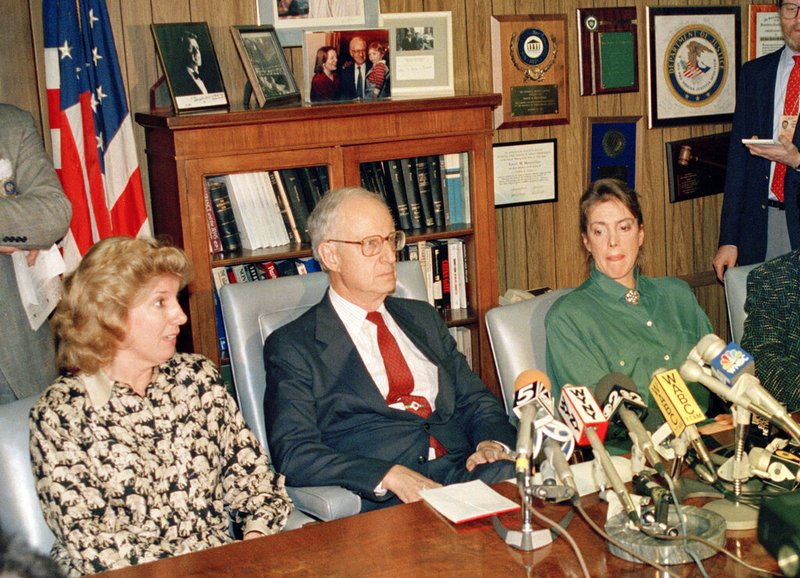 In this March 26, 1988 file photo, prosecutor Linda Fairstein, left, is shown during a news conference in New York. Fairstein was the top Manhattan sex crimes prosecutor when five teenagers were wrongly charged with the 1989 rape and beating of a woman jogging in New York's Central Park. Since the release of the Netflix series "When They See Us," a miniseries that dramatizes the events surrounding the trial, she has resigned from at least two nonprofit boards as backlash from the case intensified. Seated at the table from left are Fairstein, District Attorney Robert Morgenthau, and Ellen Levin, whose daughter Jennifer Levin was murdered in 1986. (AP Photo/Charles Wenzelberg, File)

NEW YORK -- Former "Central Park Five" prosecutor Linda Fairstein is condemning how she's portrayed in the Netflix series "When They See Us," writing that the program is "full of distortions and falsehoods."

Directed by Ava DuVernay, the film tells of the wrongful conviction of five young black and Latino men for the 1989 assault on a female jogger in Central Park. Fairstein, who headed Manhattan's sex crimes unit at the time, has long been criticized for her role in the suspects' interrogation. Fallout from the Netflix show led to her being dropped by her book publisher, Dutton.

In an op-ed Tuesday in the Wall Street Journal, Fairstein said the film's falsehoods included saying the suspects were held without food and attributing racist remarks to her that she never said.