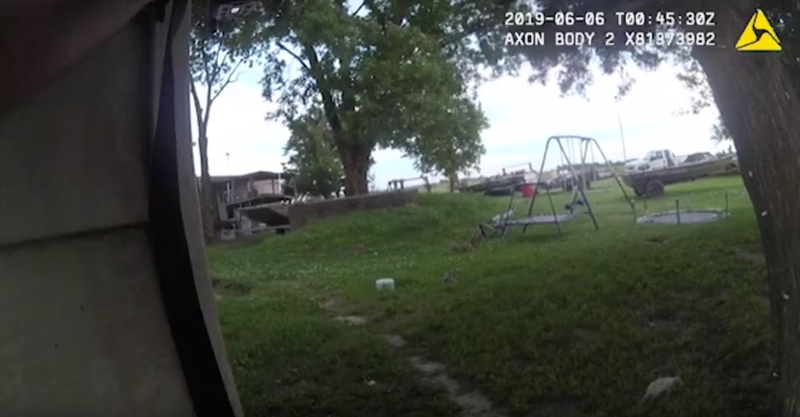 In a screen shot of body camera footage released by Jonesboro police, a negotiator speaks to Jay Michael Clem, 37, from behind the corner of a building. SWAT officers fatally shot Clem after a four-hour-long standoff, authorities said.

Police in northeast Arkansas released video this week capturing several SWAT members fatally firing on a man suspected of shooting his mother and then at officers as he walked out of a mobile home he had barricaded himself inside, according to officials.

The edited video released Monday by the Jonesboro Police Department shows SWAT officers pleading with 37-year-old Jay Michael Clem to put down his gun and surrender before they shoot him.

They had responded to the home last Wednesday in the 3100 block of Barnhill Road after Clem reportedly shot his 67-year-old mother and pointed a gun at other people in the trailer home, according to police reports.

Body camera video capturing the encounter shows a negotiator speaking to Clem from behind the corner of a building.

The officer said in the video that Clem "is trying to get us to shoot him” and then demands he show his hands.

“I’m not showing you [expletive]!” Clem is heard yelling back.

“I don’t know what’s going on in your personal life, but we can work you through it," the officer told Clem. "I can help you through it if you let me."

The negotiator adds: "You do not want to go this way.”

Jonesboro Sgt. Lyle Waterworth, who narrated parts of the video, said negotiators lost contact with Clem when he went back inside. He said Clem endured tear gas that police shot into the home throughout the four-hour-long standoff.

The edited video skips ahead and shows Clem’s silhouette in the doorway before he fires a gun. SWAT officers return a deafening hail of gunfire for roughly five seconds.

Officers begin moving toward Clem as he writhes on the ground with his gun within reach. The footage appears to show him grab the gun, and officers fire again.

Clem died at the scene.

No officers were injured. Clem’s mother has been recovering at the hospital from a gunshot wound to her lower back, police spokeswoman Sally Smith said.

Reports don’t say what started the dispute between Clem and his family.

Authorities said they recovered a gun near Clem's body.

Smith said last week that 10 officers fired at Clem. The department placed them on paid administrative leave pending the outcome of an Arkansas State Police review.

Their experience on the SWAT team ranges from a few months to up to 12 years, according to the department.