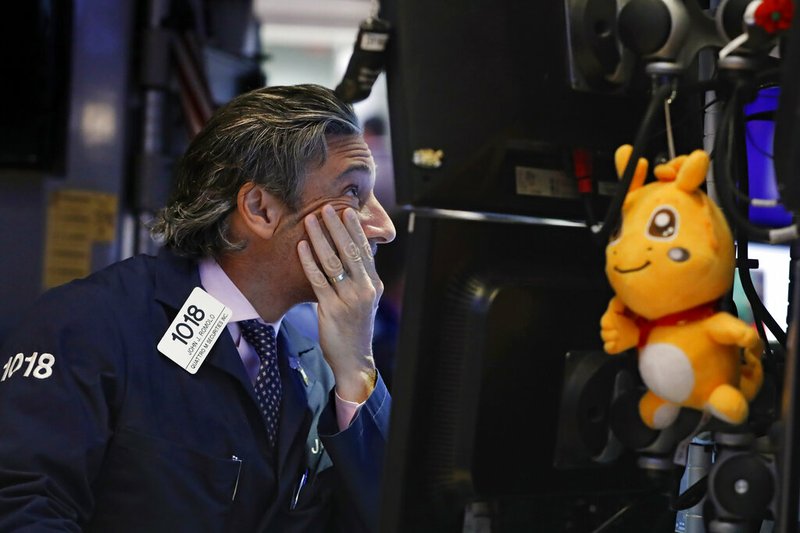 In this May 29, 2019, file photo trader John Romolo works on the floor of the New York Stock Exchange. It may seem like the market should take off once all the trade-war worries dissipate. But investors have a long list of worries that have nothing to do with tariffs. Not only are profit margins weakening, reports showed weakening economic trends around the world for April, which was before President Trump shattered the market's calm with his tariff tweets. (AP Photo/Richard Drew, File)

NEW YORK -- Once this trade-war cloud gets lifted, investors should have little to worry about, right?

Monday's market action makes it seem that way: Stocks around the world climbed after President Donald Trump withdrew a threat to impose tariffs on Mexico, at least for now. That leaves investors hoping for a deal to soothe the more contentious and complex trade dispute with China, which helped sink stocks last month.

But there are other concerns that shouldn't be overlooked.

"If the administration fixes the problem it created, I'm sure there will be a short-term pop in the stock market," said Rich Weiss, chief investment officer of multi-asset strategies at American Century Investments. "However, I believe it's only short-term because ultimately that will not remedy the underlying fundamentals, which are just not strong."

Of course, many along Wall Street are still forecasting gains for stocks this year. Much of the optimism rides on analyst forecasts for profit growth to accelerate later this year. Plus, stock prices are looking like better values following their tumble in recent weeks. Perhaps most importantly, the Federal Reserve has intimated it may come to the market's rescue again and cut interest rates if the trade war swamps the economy.

But skeptics say optimists aren't looking closely enough at all the troubles getting overshadowed by trade disputes. Among the concerns:

-- SLOWING ECONOMIC GROWTH, EVEN BEFORE THE LATEST TRADE SKIRMISHES

The bright spots for the U.S. economy are still clear: The job market is solid, as long as Friday's disappointing report doesn't herald something more lasting. The unemployment rate at 3.6% is at its lowest since 1969, and consumers are feeling relatively confident. That's key when consumer spending accounts for two thirds of the economy.

But skeptics point to other recent economic reports that showed weakness in April, before this latest round of trade worries flared up. Among them: another drop in North American freight shipments, slower manufacturing growth than economists expected and weaker business spending on equipment.

Michael Wilson, equity strategist at Morgan Stanley, sees a warning flag in falling profits for many retailers. While the industry's overall figures for the first quarter may look decent due to big gains for Amazon, Nordstrom and other retailers saw big declines. That could be an early sign that U.S. consumers, whose spending is such a key part of the economy, may be less willing to spend in coming months.

"Get ready for more potential growth disappointments even with a trade deal," Wilson wrote in a recent research report.

Companies across the S&P 500 reported roughly flat earnings for the first three months of 2019, as they're no longer getting the big boost of the first year of lower tax rates. But analysts are more optimistic about trends later this year and are forecasting growth to accelerate to 7% in the fourth quarter, according to FactSet. That's key because stock prices tend to track the path of corporate profits over the long term.

But skeptics say those projections are too high.

Barry Bannister, a strategist at Stifel who was among the first voices on Wall Street to turn cautious on stocks last year, expects earnings in the second half of 2019 to fall short of analysts' projections, particularly in the technology, health care and energy industries.

With the dollar's value strong and U.S. manufacturing slowing, he's looking for CEOs to give profit forecasts for the second half of 2019 that fall short of analysts' expectations, with announcements coming as soon as next month, when companies begin reporting their second-quarter results.

Companies are also paying higher wages to their workers, and average hourly earnings rose 3.1% in May, which raises their costs. Compare that against the consumer price index, which gives a window into how easily companies can pass along price increases to their customers, notes Chun Wang, senior analyst at Leuthold. CPI inflation hasn't been that high since 2011, and it was at 2% in April.

All those pressures could bring down profit margins for companies, which have recently been at record highs. If companies aren't able to extract as much profit from each $1 in revenue, they'll need to make up for it by delivering more in sales. A slowing economy would make that tough.

Even beyond trade talks, politics can sway markets.

In Washington, regulators may be setting the stage for antitrust probes into some of the biggest tech companies. Amazon, Apple, Google's parent and other mega-tech companies have been some of the market's best-performing stocks in recent years, and losses for them have outsized effects on S&P 500 index funds. Consider June 3, when nearly three quarters of all the stocks in the S&P 500 rose, but the overall index fell 0.3% because big technology companies had a bad day.

In the Middle East, the Trump administration has pledged "maximum pressure" on Iran. Beyond the possibility of violence, the increasing tensions could send the price of oil soaring, as well as inflation, which has long been dormant. In Europe, Britain is still negotiating its exit from the European Union, and investors are worried about signs of increasing tension between the bloc and Italy.

"So, fixing the China situation does not fix the rest of the world," said American Century's Weiss. "Is it a positive? Sure. It's positive in the short term, but it doesn't remedy all the other things we have going on."