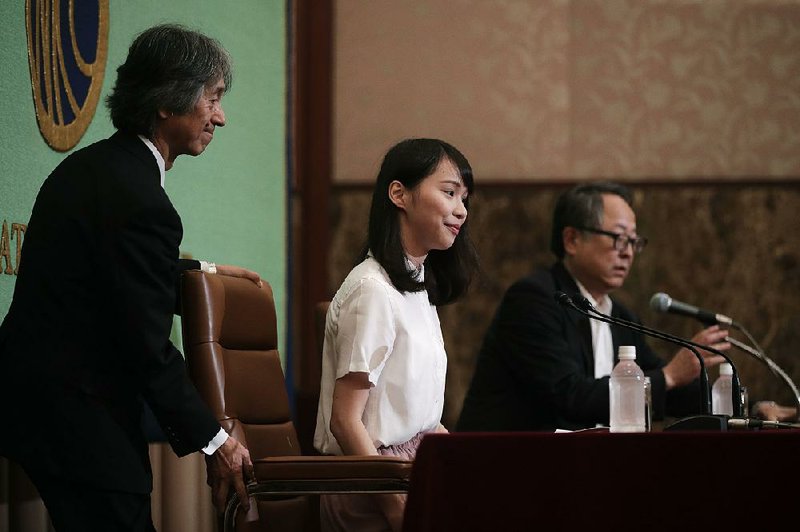 HONG KONG -- Hong Kong's leader on Monday defended support of extradition legislation that prompted a major protest by residents who fear that mainland China is broadening its footprint in the semi-autonomous territory.

Lam said Sunday's protest shows Hong Kong's enduring commitment to its people's freedoms. She denied that she is taking orders from the central government in China's capital.

"I have not received any instruction or mandate from Beijing to do this bill," she said. "We were doing it -- and we are still doing it -- out of our clear conscience, and our commitment to Hong Kong."

She said the bill seeks to prevent Hong Kong from becoming a haven for fugitives and is not focused on mainland China. Western democracies have accused Hong Kong of failing to address issues such as money laundering and terrorist financing, Lam said.

"Not only me, but I believe most Hong Kong people -- have felt really angry with Carrie Lam's response to our rally," Chow told reporters in Tokyo, where she arrived Monday to appeal to Japanese media and politicians.

Lam was elected in 2017 by a committee of mostly pro-Beijing Hong Kong elites. Critics have accused her of ignoring widespread opposition to the extradition-law amendments.

Lam, whose popularity ratings have sunk in recent weeks, has become the focal point of rising public anger against the proposal, which could spill over into broader unrest or put her job at risk. But if she weathers the protests and gets the legislation passed, then she could improve her chances at being appointed to a second term, something no other Hong Kong chief executive has achieved, analysts said.

"I would say that Carrie Lam's persistence has a lot to do with prioritizing Beijing's interest over the local population's," said Mathew Wong, a professor of political science at the Education University of Hong Kong. "If she loses Beijing's trust, her career is over. But if she could ride out the dissatisfaction, she would have achieved something in Beijing's eyes."

"Certain countries have made some irresponsible remarks" about the legislation, Geng said, without elaborating.

President Tsai Ing-wen of Taiwan said Sunday that the protesters had her support.

"We stand with all freedom-loving people of #hongkong," she wrote on Twitter.

There were no signs Monday that the demonstration had led any factions within the Beijing-friendly camp to break ranks. The Liberal Party, which is pro-government, said in a statement after the protest that it respected those who demonstrated but would continue to support the bill, the public broadcaster RTHK reported.

Sunday's demonstration was likely Hong Kong's largest protest in more than a decade, with hundreds of thousands of people shutting down the heart of the skyscraper-studded city three days before the Legislative Council is to take up the bill.

The demonstrations refocused attention on the former British colony, whose residents have long bristled at what many see as efforts by Beijing to tighten control, and dominated newspaper front pages in a city that allows far more freedom of expression than other parts of China.

Hong Kong was guaranteed the right to retain its own social, legal and political systems for 50 years under an agreement reached before its 1997 return to China from British rule. But China's ruling Communist Party has been seen as increasingly reneging on that agreement by pushing through unpopular legal changes.

The extradition-law amendments would allow Hong Kong to send people to mainland China to face charges, spurring criticism that defendants in the Chinese judicial system won't have the same rights as they would in Hong Kong. Opponents contend the proposed legislation could make Hong Kong residents vulnerable to vague national security charges and unfair trials.

Three officers and a journalist were injured in Sunday's protest, according to Hong Kong media reports. Authorities said 19 people were arrested in connection with the clashes.

Information for this article was contributed by Austin Ramzy of The New York Times.