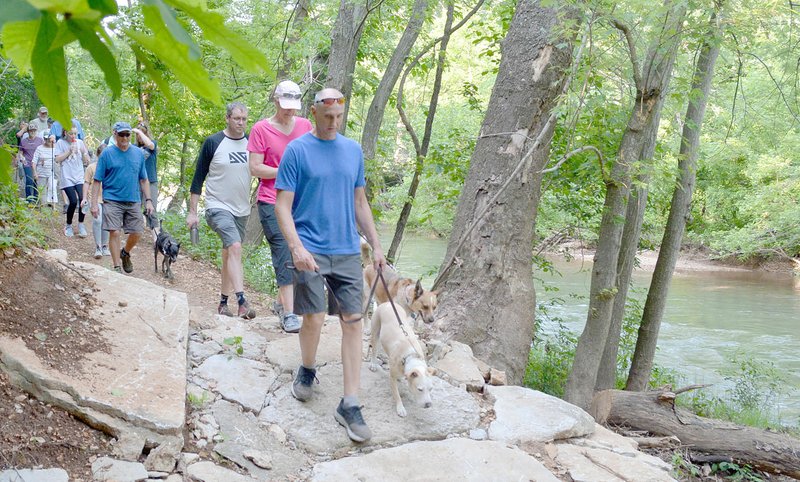 Keith Bryant/The Weekly Vista Walkers carefully step down a somewhat steep rock section of trail alongside Little Sugar Creek during last week's preview hike, which highlighted about a one-and-a-half mile section of the 11 Under trails. The trails are currently closed.

BELLA VISTA -- Some local residents got their first official look at the in-progress 11 Under trails in late May.

"It's a really pretty piece of trail," he said. "I want to get people out to see what we did."

The trail begins near the Kingsdale complex parking lot and heads down into the valley beside the Berksdale golf course.

The first section provides access to Little Sugar Creek. There aren't many ways to get this close to the creek in Bella Vista outside of the golf courses, he said.

The section also features bluffs and other rock formations. Hikers saw a snippet of a 50-mile trail system, Rushing said. Other sections are very different, he explained, but excellent vistas, rock formations and other notable sights can be found throughout the system.

The southern sections of trail are mostly complete, he said. The trails cannot be opened until the road crossings and tunnels are complete, although he hopes to have the trails open around November, Rushing said.

Cassi Lapp, Bella Vista communications manager, said the city plans to use a program similar to one it held with the Back 40 trails, in which volunteers who trim weeds and perform other maintenance are allowed early trail access.

Mayor Peter Christie said this was his first time on the new trail system.

"It's absolutely gorgeous," he said.

Christie said he was especially impressed to see the trail dressed with rocks to prevent erosion in low spots, adding the whole thing was fairly easy to walk.

Pastor Mark Voll with Village Bible Church was among the hikers.

"What impressed me is the way they use the natural beauty to accentuate going for a walk. It's like going for a technicolor walk," he said, noting the vibrant green leaves on every side.

Voll said he hopes to see most of the finished product, though much like the city's 550 miles of road, he doubts he'll ever see all of it.

"Don't want to take for granted the physical ability to see these things," he said.