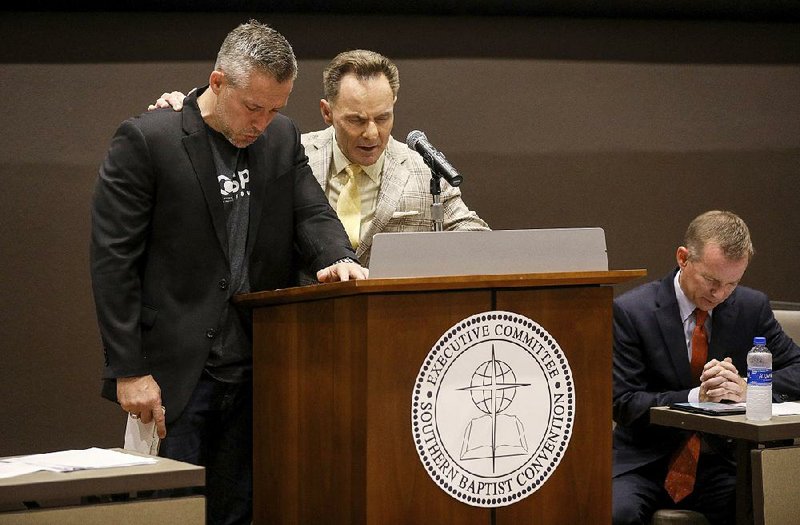 J.D. Greear (left), president of the Southern Baptist Convention, and Ronnie Floyd, president and CEO of the SBC Executive Committee, pray during a meeting Monday at the group’s conference in Birmingham, Ala.

BIRMINGHAM, Ala. -- A group of Southern Baptist Convention leaders sought to challenge and inspire pastors to take more action toward racial reconciliation within the denomination by sharing their own stories Monday at the Birmingham-Jefferson Convention Complex.

The discussion, a segment of the denomination's Pastors Conference, came a day before the group's annual two-day meeting where delegates will vote to give the national convention the right to expel churches that affirm racism.

Southern Baptist membership has been historically white. Of those who identified as being Southern Baptist in a 2014 Pew Research religious landscape study, 85% were white, 6% percent were black and 3% were Hispanic.

The 14.8 million-member faith group, founded in 1846 over a disagreement involving slavery, officially apologized in 1995 for "historic acts of evil such as slavery;" passed a resolution on racial reconciliation in 2015 acknowledging "its own complicity" in racism; and voted last year to eliminate the Curse of Ham doctrine as justification for racism.

Southern Baptists as a denomination officially condemned white supremacy in 2017 after sparking a backlash when they initially voted not to consider the resolution brought by Texas pastor Dwight McKissic.

New Orleans pastor Fred Luter Jr., president of the convention from 2012-14 and the first black man to lead the national gathering, said the story of efforts in race relations by two pastors in the city prevented what could have been a race riot in Birmingham.

"The fact of the matter is you guys took a chance to do something in this city that probably if you all would not have done it, we would have heard a whole different story coming out of Birmingham, Ala.," Luter said. 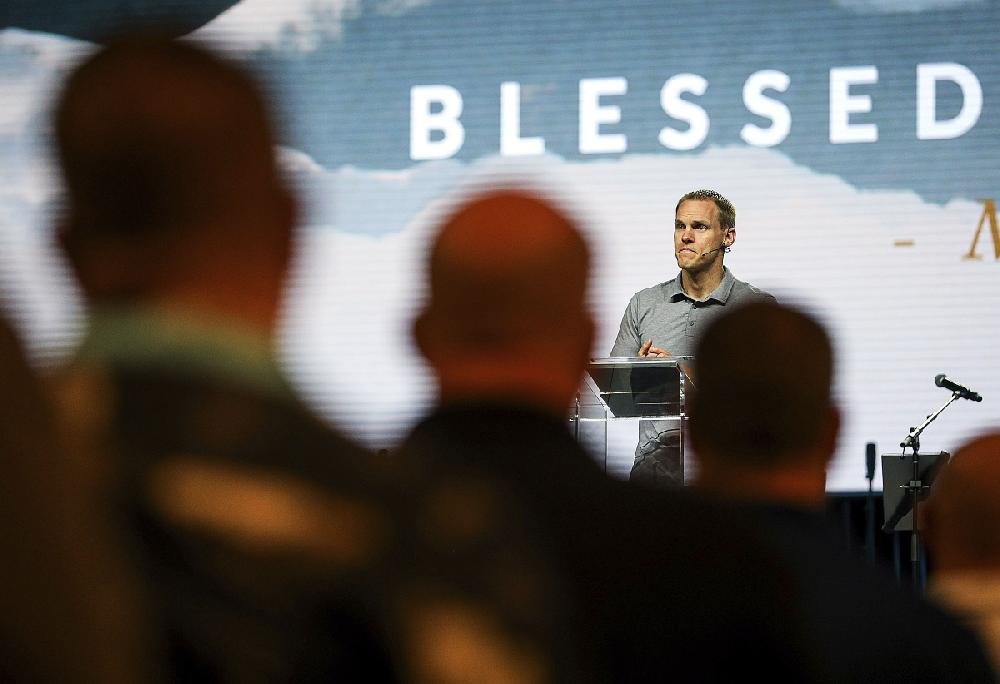 David Platt, former president of the International Mission Board and a current pastor at McLean Bible Church in Virginia, speaks Monday at the Southern Baptist Convention Pastors’ Conference in Birmingham, Ala.

Two pastors -- the Rev. Mike McClure of Rock City Church and the Rev. Buddy Gray of Hunter Street Baptist Church in the city's suburb of Hoover -- worked together in the wake of racial divides after a white police officer shot and killed a black man in a mall on Thanksgiving 2018. They gathered a group of 130 pastors, called Pastors4People, which raised $30,000 to help mall employees and others affected by boycotts and protests to cover lost wages and provide holiday gifts for their children.

Gray, who is white, said he'd met McClure a year earlier and that he had been "pretty ignorant" until he learned more about race issues from the people affected by the shooting.

"[McClure] kind of educated all of us because we said, 'Help us understand more than what we see that's going on on the TV,'" Gray said. "Help us figure out what we can do next.

"It all came down to, let's just love each other and love the Lord, and let us see that love shown. When that began to happen in our communities, things began to change."

McClure said Noah's ark represented "the perfect picture of racial reconciliation ... put[ting] prey and predator in the same place ... because where they're going is bigger than where they're living" -- but that relationships are key to truly reconciling.

"Any racial reconciliation that lacks relationship will be an ineffective, powerless movement, because without connection -- the last thing Jesus said was 'Make them one,'" McClure said. "If we can do that, we can come out together."

The Rev. Noe Garcia, senior pastor of North Phoenix Baptist Church in Phoenix, also indicated that true racial reconciliation required substance, using the metaphor of a Christmas tree to describe himself as once being on the periphery of solid race relations and not at its core. When he became pastor of the church three years ago, Garcia realized that the diversity in Phoenix wasn't represented at the church he led.

"The stand is the most important part to put the tree up ... [but] the ornaments give the perception of something but has no value [or] substance to the tree," Garcia said. "I recognized that most of my life as a Hispanic, I was just the ornament. I became OK with being just the ornament and never a part of the stand that held something up."

John Shillington, executive adviser at North Phoenix who also was on the panel, said he'd recognized Garcia's passion to lead a congregation. At the time Garcia joined the church, 99% of the congregation was white, including Shillington, who has been with the church since 1986 and who also recognized the discrepancy.

"I actually said to [Garcia], remember that, because there's going to be a couple of years along the way where that's going to be the only thing that keeps you here," Shillington said. "No matter who leaves or who stays, this is what God is leading us to do.

"There's been pain in that, but there has been great victory in that."

Garcia noted that now the racial makeup of the church is approximately 60% white and 40% members of minority groups, and his responses to church member messages discouraging his continued leadership were to re-emphasize the diversity that Luter said will be what heaven looks like.

McClure said he was already acquainted with Gray before last year's shooting, and that the acquaintance was the catalyst for their partnership. He acknowledged that each brought different resources to Pastors4People.

"We have to come to the table before there's something on the table," McClure said. "Once the tragedy in our city broke loose, it was easy for me to reach out to [Gray], because we had already come to the table.