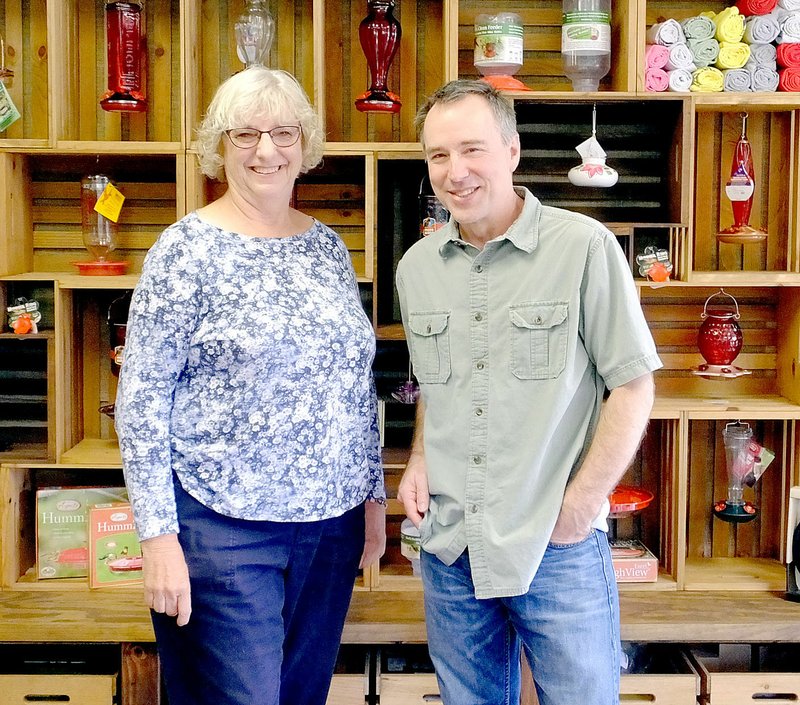 Lynn Atkins/The Weekly Vista Gail Storm and Butch Tetzlaff of The Bluebird Shed will be working together on citizen-scientist projects along with other members of a new bird watching group in Bella Vista.

BELLA VISTA -- A local woman is working to form a birding group.

Gail Storm said so far she's gathered 60 emails and names of people interested in such a club.

Storm's birding group in California did an annual count of turkey vultures as they migrated south from British Columbia, she said. The local Air Force base had to cancel some flights each year because the migrating birds traveled so high, she said. Air Force personnel eventually started contacting the club for information about the migration, Storm said.

Birders were the ones who discovered bluebirds were in danger when house sparrows, a species imported from Europe, were taking over nesting cavities, Storm said. Groups like the Bella Vista Bluebird Society stepped in to help provide man-made boxes for nests so both species had a place to raise their young. Because of that, the bluebird population has recovered, she said.

Storm is a member of the Bella Vista Bluebird Society, but she's interested in all birds. She thinks there are a lot of local people interested in birds because the Walmart store in Jane, Mo. sold more wild bird seed than any other Walmart a few years ago, Storm said

Plans include monthly bird walks, she said. They could travel to places like the Swepco Lake to see bald eagles or stay in Bella Vista on the local trails. The trails around Crystal Bridges are also a good place to watch birds, she said. And they may consider some overnight trips since the best time for bird watching is early morning, she added.

Storm said she traveled not long ago with friends to an area near Northwest Arkansas Regional Airport where people were seeing painted buntings. They spotted some of the brightly colored birds on the trip and now she heard they've also been seen in Bella Vista near the Dogwood golf course, Storm said.

The club may also sponsor quarterly educational speakers. The quarterly events will be open to the public.

Service projects could include one-time events like the BioBlitz and recurring events like the Christmas Bird Count. There's no historical data in the area about the bird population, so the new club will help develop it, she said.

Storm said she's heard several people comment there are fewer hummingbirds than usual this year, but there's no way to know for sure if something is wrong. Maybe the hummingbirds are busy nesting for a few weeks and not visiting their feeders. A historical record could answer that question.

Storm said the club will offer birders some camaraderie. When they go out to enjoy nature, they won't be going alone, she said.