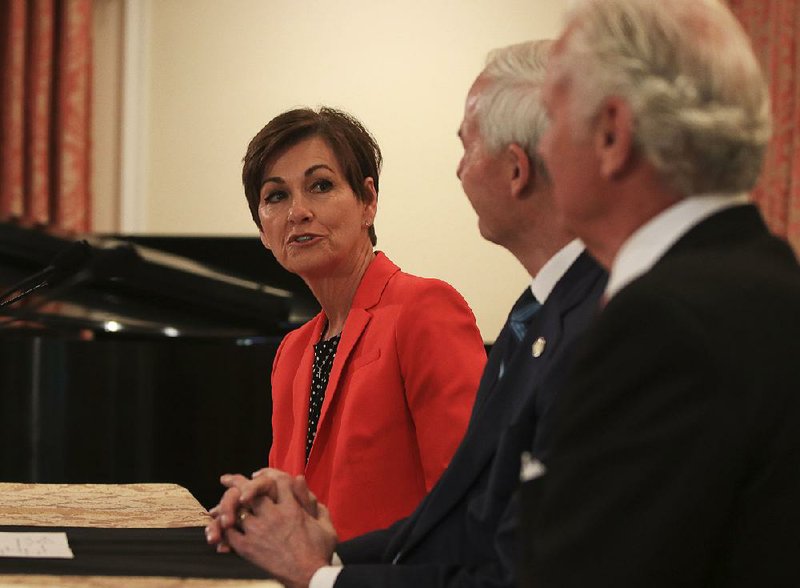 Gov. Kim Reynolds (from left) of Iowa, joined by counterparts Asa Hutchinson of Arkansas and Henry McMaster of South Carolina, speaks Monday at a news conference during the National Computer Science Summit for State Leaders, held at the Governor’s Mansion in Little Rock. - Photo by Staton Breidenthal

Arkansas was the center of the computer science education universe on Monday.

Industry and government leaders from 30 states, Washington, D.C. and Canada convened at the Arkansas Governor's Mansion for the National Computer Science Summit for State Leaders.

Arkansas regularly finds itself in the bottom of half of nationwide rankings, so state leaders -- including Gov. Asa Hutchinson -- bask in the state's status as the leader in kindergarten through 12th-grade computer science education.

South Carolina Gov. Henry McMaster said that the very fact that so many stakeholders gathered in Little Rock for the summit illustrates how Arkansas is viewed as a leader in the field. McMaster, a Republican, attended the summit alongside Republican Iowa Gov. Kim Reynolds.

Monday's conference was the first national computer science conference held in Arkansas, Hutchinson said. In addition to Reynolds and McMaster, it included presentations and discussions from education commissioners from Kentucky, Mississippi, North Carolina and Tennessee.

Hutchinson has made computer science education one of his chief initiatives since taking office in 2015.

In his first term, he backed legislation that required all public high schools to offer at least one "high-level" computer science program. That policy and other incentive programs have prompted an increase in Arkansas students taking computer science classes from 1,104 in 2014 to more than 8,000 last year.

Hadi Partovi, the founder and chief executive officer of Washington-based computer science advocacy group Code.org, called Owen a "rock star," and he praised Hutchinson as the "most passionate governor in the country" for computer science. Arkansas was the first state to meet all nine of Code.org's policy recommendations.

"Arkansas is really a beacon in our country and even globally," Partovi said. "When I travel, I talk about the change that's happened in Arkansas because people don't expect a small state to lead the United States on this mission."

Hutchinson said the conference presented leaders with a chance to share ideas. While Arkansas is a leader, he said that there's room to improve. Specifically, he said he wants a greater focus on computer science for future teachers at the post-secondary level, and he wants to continue to reduce the gender gap in computer science participation in Arkansas.

Hutchinson has preached that computer science education is a key ingredient to attracting new companies to Arkansas. So why invite leaders from other states that Arkansas competes with for economic development projects to share secrets?

"While we want to continue to be on the cutting edge of computer science education, this is a national need. And I want our country to be successful in this," the Republican governor said. "So I'm delighted to share what's happened here, but I'm also grateful for these two governors coming here to share what's happening there. That's what governors do: we listen; we get best ideas from each other. That's why states are moving and really pushing these agendas.

"The computer science initiative did not start with legislation in Washington D.C. It started in the private sector, and it started through governors."

Reynolds said she took several pages of notes from the conference that she plans to take back to Iowa. She complimented Arkansas for mandating that each high school offer a computer science class. She said that they've encouraged it in Iowa, but she'd like to see the state follow Arkansas' lead and make it a requirement. She said she'd also like to emulate Hutchinson's bi-annual computer science tour, in which he visits schools across the state to encourage computer science education.

Earlier this year, West Virginia became the first state to make a computer science credit a requirement for high school graduation. Hutchinson said that he didn't think that was necessary in the Natural State. Instead, he said that student demand for the class should drive districts to offer more classes. 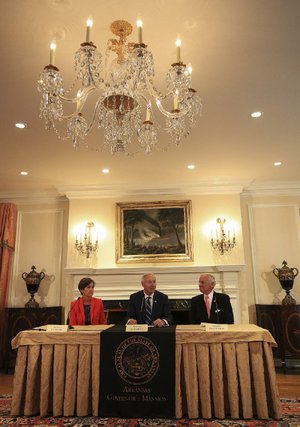