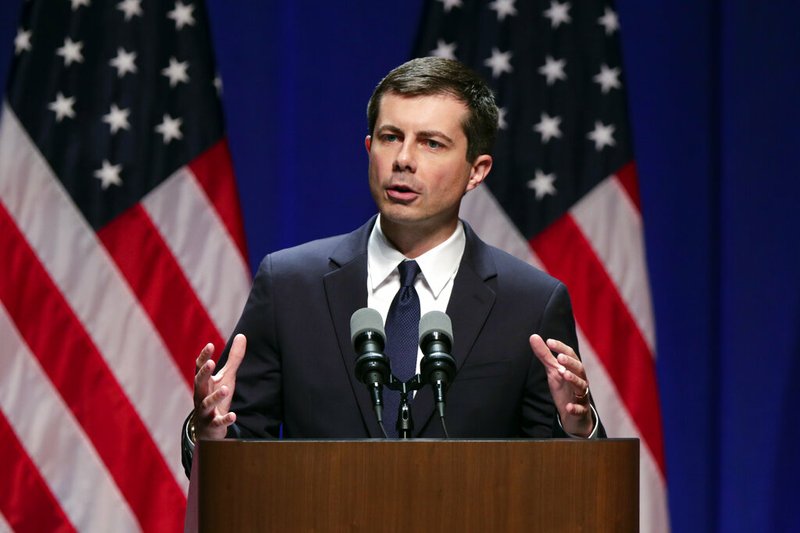 The 37-year-old mayor of South Bend, Indiana, an Afghanistan War veteran, said he wants to repeal the 2001 authorization for use of force in Iraq and Afghanistan, adding that when he returned in 2014 after serving as an intelligence officer with the Navy Reserve, he believed U.S. military involvement there was winding down.

"We should never again send troops into conflict without a clear definition of their mission and an understanding of what will come after," he said.

Buttigieg used the nearly one-hour speech at Indiana University to address an issue his campaign says has not received the attention it deserves from the 2020 Democratic field. He also sought to address concerns he may be too young and inexperienced to be president, touching on a wide range of issues, from NATO to the Paris climate agreement, North Korea, Russia, Iran and the spread of misinformation.

Buttigieg criticized President Donald Trump for making foreign policy decisions erratically -- and often delivering them by early morning tweet -- but said Democrats also have lacked a consistent policy that contemplates where the world will be decades from today.

"We need a strategy," he said. "Not just to deal with individual threats, rivalries and opportunities, but to manage global trends that will define the balance of this half-century in which my generation will live the majority of our lives."

He said as president he would rejoin the Iran nuclear deal, recommit the U.S. to the Paris climate agreement and work to repair relationships with NATO allies. He referenced his Navy counterterrorism training as helping guide his thinking on addressing terrorism and extremism in the U.S. and abroad.

Buttigieg also criticized members of Congress -- a group that includes several of his 2020 Democratic rivals -- as being "asleep at the switch" and abdicating their responsibility on issues of war.

All seven sitting senators seeking the 2020 Democratic nomination, including Sens. Bernie Sanders of Vermont and Elizabeth Warren of Massachusetts -- voted in favor of GOP Sen. Rand Paul's 2017 measure to repeal the authorization.