Namafjall, along the Ring Road that circles Iceland, is one of the island’s most accessible and impressive geothermal areas. Photo by Cameron Hewitt via Rick Steves' Europe

Iceland, formed long ago by volcanoes, is known for its otherworldly landscape, with steaming fields and percolating mud. The volcanic activity produces naturally heated water, which Icelanders have cleverly harnessed for thermal baths and pools. Geothermal experiences — visual and physical — are worth seeking out on a visit here.

Wandering through the colorful terrain is a classic Icelandic treat. The most visited geothermal sight is Geysir, home to the world's first-known geyser, on Iceland's most famous tourist route, the Golden Circle. The original Geysir is now mostly dormant, but the field around it still steams and bubbles nonstop, periodically punctuated by a dramatic eruption of scalding water from the one predictably active geyser, Strokkur. Strokkur erupts about every five minutes, shooting about 50 feet into the air.

Though it lacks a spouting geyser, a more impressive thermal area is at Namafjall, in North Iceland along the Ring Road that encircles most of the island nation. It's surrounded by mountains and far less crowded than Geysir. Namafjall's pungent sulfurous fumes are worth plugging your nose for to explore the fumaroles (little stacked-rock vents spitting steam), bubbling pools, and a terrain brushed in vivid hues.

Closer to the capital city Reykjavik, the Seltun area on the Reykjanes Peninsula is also striking. This steaming and smelly landscape hints at the geothermal power just underfoot. A boardwalk and marked paths outline a 15-minute circuit through the field over boiling hot water and steam. Partway through the loop, a hilltop viewpoint overlooks the entire area, with Kleifarvatn lake just beyond. The environment here is affected by botched attempts to exploit the geothermal field for energy — first in the 1750s, and most recently in the 1940s. In 1999, one of the bore holes from the last attempt got plugged up and exploded violently, creating a 30-foot crater now filled with water.

Along with marveling at the natural phenomena, I enjoy learning just how the country harnesses the substantial power of its thermal waters. Just off the Golden Circle loop, the exhibition at Hellisheioi Power Plant (Hellisheioarvirkjun ) gave me a good look at turbine machinery at work. The hot water from the ground (which is piped to homes for heating) drives the turbines that generate electricity.

For many, the best way to experience Iceland's geothermal delights is literally plunging into one of Iceland's naturally occurring thermal baths. The most famous (and most expensive) is the spalike Blue Lagoon, with milky blue water filling a volcanic reservoir on the Reykjanes Peninsula, near Keflavik Airport. Nestled in a lunar-like landscape, this steamy oasis is a sprawling hot-water playground for grown-ups. I like to splish and splash around, exploring the hidden nooks and crannies of the interconnected pools, and head to the hot, thundering waterfalls to give my shoulders a pounding. The naturally heated water is thoroughly relaxing. Also relaxing is the swim-up bar, where each bather gets a drink included with admission. 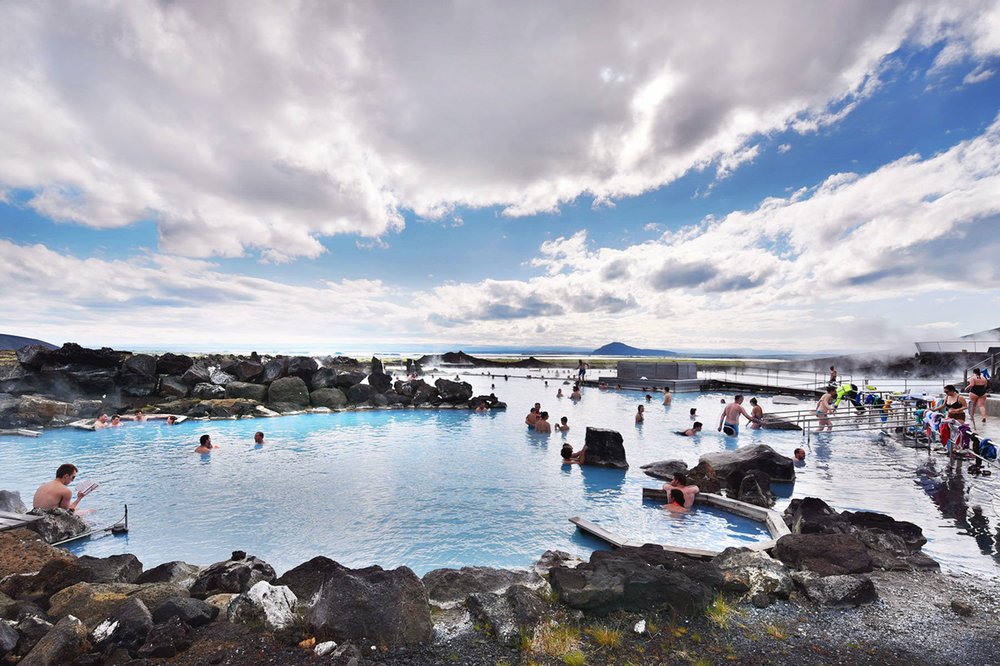 Other premium but less upscale pools are Fontana (on the Golden Circle route); Myvatn Nature Baths (partway around the Ring Road, in North Iceland); and Krauma (in West Iceland).

While those baths have big marketing budgets and attract lots of international visitors, they're rarely frequented by Icelanders — who know that you can bathe in equally luxuriant water at 100 degrees for a fraction of the price, albeit in simpler surroundings, at one of the country's many thermal swimming pools. Every community of even a few hundred people seems to have a well-maintained pool complex, often with a warm lap pool and smaller hot pools (called "hot pots"); many also have saunas, steam rooms, and water slides. These pools provide a pleasantly authentic Icelandic experience, and an opportunity to rub elbows with locals (you'll find listings at swimminginiceland.is).

Those who love the out-of-doors can find free opportunities for an al fresco soak in thermal springs throughout the countryside. Some are easy to reach by car, while others require a bit of a hike, but your reward is a long soak in toasty water surrounded by an incredible landscape. Above the town of Hverageroi, near the end of the Golden Circle route, is the thermal river of Reykjadalur (literally "Steamy Valley"). Stepping out of your car at the end-of-the-road parking lot, you're surrounded by steaming hillsides. After about an hour hike up the valley, you reach the stream. The water is shallow — you need to lie down to be submerged — but wonderfully warm and soothing. Reykjadalur is far from undiscovered, so there's usually plenty of company to enjoy the experience before the hike back to your car.

After nearly 1,200 years of taming their volatile island, Icelanders have harnessed geothermal energy in ways both practical and hedonistic. From gazing upon chromatic, steaming lakes to soaking in a thermal bath, Icelandic visits are affected by the country's powerful natural forces.