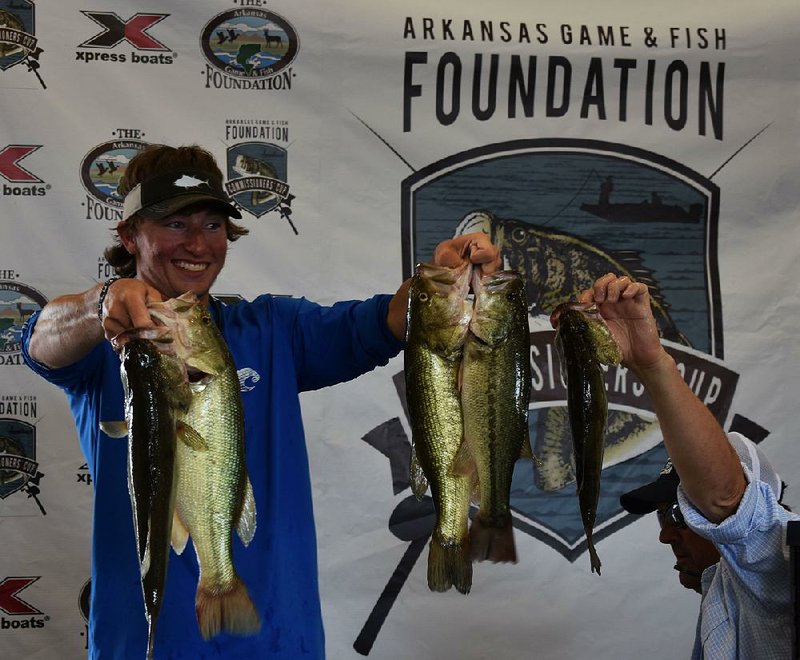 LAKE HAMILTON -- Any Game and Fish Foundation event is first class, so it was predictable that the first Commissioners Cup Bass Tournament June 1-2 was an elite presentation.

Deke Whitbeck, president of the Arkansas Game and Fish Foundation, said the format essentially created the state's first overall high school fishing championship. The seven commissioners of the Arkansas Game and Fish Commission funded scholarships for the top three finishing teams. Multiple sponsors provided merchandise that was given away as prizes and in "swag bags."

Unlike most championship tournaments, the Commissioner's Cup had no final round cut. All of the anglers fished both days.

Beau Browning of Hot Springs and Braxton Shifflett of Jessieville qualified as a team, but Shifflett did not fish in the tournament. Fishing alone, Browning won the tournament by weighing in 10 keeper largemouth bass over two days that totaled 30.21 pounds. That gave Browning a 7-pound margin over the second-place team of Cole Martin and Kanon Goss, both of Hot Springs, who caught 10 fish totaling 23.08 pounds.

Finishing third were Weston Villines of Bethel Heights and Jacob Rhea of Rogers, who caught 21.75 pounds. Their biggest catch, a 4.88-pound largemouth bass, was the biggest fish of the tournament and earned them a custom trophy crafted by Harper's Pure Country Taxidermy in Damascus. An anonymous donor paid for the trophy in honor of Game and Fish Commission wildlife officers.

Browning, who was accompanied by his mother Tammy Browning and an adult observer, won a $4,000 scholarship endowed by Mac McClanahan for him and Shifflett.

Browning said he started the tournament on June 1 trying to fish deep structure away from the bank. Fish didn't bite, so he caught a limit weighing 14.83 pounds on the bank.

"I pulled up on the right stretch at the right time, and it just happened," Browning said. "That set me up today [Sunday] to go offshore and gamble a little bit. When I pulled up to the first spot, it was like fireworks went off. I got a limit quick, hours before I did on Saturday."

Browning was riding high with hours to fish, but then disaster struck. Using a drop shot rig, he lost an 8-pounder on camera, and then he lost a pair of 5-pounders, one of which was closer to 6 pounds.

"I can't tell you how I lost the first one," Browning said. "The other two, I just horsed them. You cannot throw that finesse tackle and force those fish to do anything you want them to. My adrenaline got the best of me."

Response to adversity defines champions. Losing 19 pounds of bass in rapid succession can destroy an angler's confidence. Browning acknowledged that he had to fight through doubt and self-recrimination.

"It does get in your head," Browning said. "My thing is that I just wish I would not have got the bite, but I have to also say if I had not got that bite, I'd be in the exact same place I am. All you can do is go up. Learn from it, adjust to it."

Browning's strategy was simple in its complexity. He fished boulders the size of car hoods in depths of 15-20 feet.

"I live close to here, so I knew a few [boulders] already," Browning said. "In practice, I was able to find some more. When the sun got up, it positioned fish on back side in the shade. I threw in shade lines of big boulders and found those better size fish."

The water was cloudy, Browning said, but there was still considerable light penetration at that depth. He said the water temperature was about 80 degrees.

Whitbeck said the tournament raised more than $30,000. He said that money will be applied to the Steve Smith endowment fund, which an anonymous donor will match up to $150,000. He said the endowment currently contains about $100,000.

So many people attended the weigh-ins that Whitbeck said the tournament will probably need to be held in a larger venue next year.

"I'm really pleased with the tournament, but we've outgrown that space even in our first year," Whitbeck said. "That building was crammed."

Overall, Whitbeck said he was pleased that the tournament supported the commission's efforts to recruit and retain anglers.

"This was more of a 'friend-raiser' than a fundraiser," Whitbeck said. "It created a buzz among all those kids and their parents." 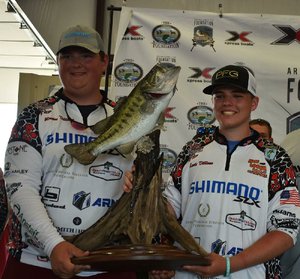 Photo by Bryan Hendricks
Jacob Rhea (left) and Westin Villines won this trophy after catching the biggest bass in the Commissioner’s Cup. 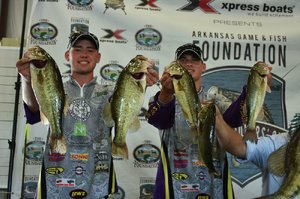