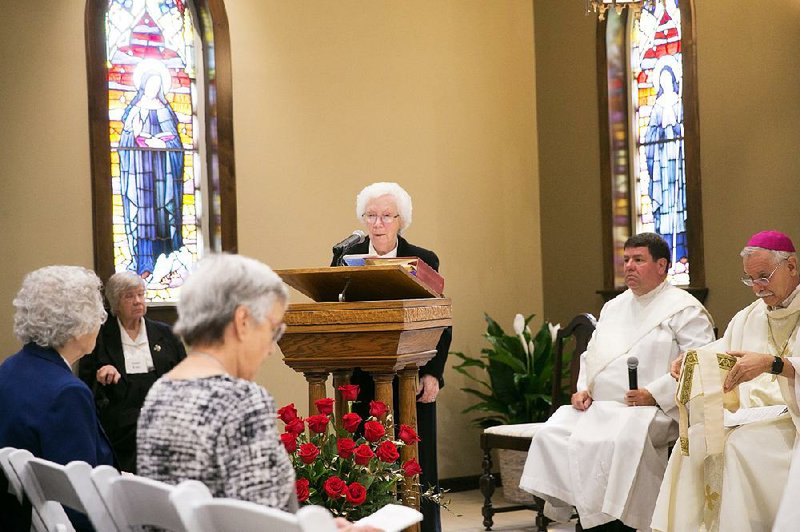 Sister Maria DeAngeli, prioress of St. Scholastica, speaks during the dedication of the new monastery in October. DeAngeli, who has led the monastery for the past 10 years, will step down as prioress today in a closed ceremony at the monastery, one of many changes in the life of the order in recent years.

After leading St. Scholastica Monastery in Fort Smith for the past 10 years, Sister Maria DeAngeli will step down as prioress today in a closed ceremony.

After a time largely dedicated to preparing for the move to a smaller monastery that better fits the needs of the order, among DeAngeli's hopes is that she will "just be one of the sisters" again.

"I've been praying real hard that I can do that very gracefully," DeAngeli said of the move.

During her time as prioress, DeAngeli has helped facilitate changes such as the agreement to sell its former school building to Trinity Junior High School, and the decision to helped see the order through the planning, fundraising for and establishment of a smaller, one-level monastery.

The number of sisters at St. Scholastica has dwindled over the decades from the hundreds to fewer than three dozen, but the order remains dedicated to peace, humility, work and prayer -- values that the sisters and those who have known them through the years say endure.

St. Scholastica Monastery, formerly St. Scholastica Convent, was originally established in Shoal Creek by four sisters who migrated from Ferdinand, Ind., in 1879 with the goal to expand the reach of the Catholic Church, according to the monastery's newsletter Horizons. The Benedictine sisters later moved to the 65-acre plot of land in Fort Smith in 1925 after starting construction on the six-story monastery that would house the sisters for more than 90 years.

DeAngeli has been with the monastery since graduating from the eighth grade in 1949, before becoming a novice in 1951, making her first profession in 1953 and committing to the order for life in 1956.

DeAngeli first worked on mission in places including Stuttgart and Paris, before helping out at what was then St. Joseph's Orphanage in North Little Rock, and Subiaco Abbey before earning college degrees and spending nearly a quarter century as a pastoral minister, during which time she went on mission to Helena to work among the poor for 13 years. She has also served in roles including that of subprioress during the 1980s.

"They were all happy years for me," DeAngeli said of her time with St. Scholastica. "There was some downtime, but I loved every mission I was ever assigned to."

The number of sisters grew to about 375 until after the conclusion of Vatican II in the mid-1960s, which re-examined doctrinal issues in the Catholic Church, and the growing women's movement in the 1970s. While women left monastic orders in large numbers during the 1970s, particularly in the United States, DeAngeli said the number of women who remained at St. Scholastica was still in the hundreds, and some who left did so to found another monastery in Columbia, Mo.

By the time she was elected prioress in 2009, though, there were 67 sisters. These days, there are 23, nine of whom live in the nearby nursing home Chapel Ridge, where the sisters can visit and pray with them, and where the sisters have Mass on Saturday evenings. One candidate, or postulant, will become the 24th member when they are made a novice on June 23.

"When I asked them to go ... I said, 'Now, I'm sending you with a mission, and your mission is to bring joy and Benedictine peace to the nursing home,' and they have done that," DeAngeli said.

The number of sisters no longer called for a six-story building, and reconstruction of the monastery to bring it up to code was estimated at $15 million, three times the amount the sisters were told would be the cost to establish a smaller building on the same plot of land. The community voted to move forward with the new monastery, and founded a $5 million capital campaign, "Forward in Faith."

WHEN IT COST A NICKEL

Barbara Anhalt of Fort Smith lived a little more than two miles from the monastery in the late 1950s and remembers when it cost a nickel to ride the city's bus transit system from her home to the stop it made near St. Scholastica Academy, a ride she could afford depending on the money she earned taking care of children.

"If I had good baby-sitting jobs I rode the bus, and if I didn't, I walked," Anhalt recalled.

A 1959 graduate, Anhalt is still a member of the academy's robust alumnae association who call themselves the "Scho Girls." The association still has about 700 alumnae from around the United States on its mailing list and has remained active in helping at the monastery in a number of ways. Barbara's husband, Leo, heads the Fort Smith-based construction firm SSI Inc., which was very involved with overseeing the building of the new monastery.

The most recent efforts of the Scho Girls have centered on fundraising efforts for the capital campaign, including the auction of items that furnished the now-empty monastery, as the community moved to the new monastery in November.

Dorothy Sullivan, a Scho girl who graduated in 1960, said it has been an especially eventful time for the Benedictine community.

"Not only is [DeAngeli] stepping down [as prioress], but it's the sisters having moved out of the big, six-story building into the new, one-level building on the same campus," Sullivan said. "It was bittersweet, auctioning off the contents of that building that wouldn't fit into the new monastery. It's been very bittersweet, but it had to happen."

For the past seven years Sullivan has been an oblate for St. Scholastica, one of the members who's affiliated with the order but has not taken formal vows, and lives outside the monastery. Her sister graduated from the monastery's academy in 1962, and her mother graduated in 1928. She spent time being taught at the academy when it was housed in part of the monastery, and when it moved to its newer building in 1958, 10 years before the school closed its doors.

"We have had a lot of ties, not just to the buildings, but to the sisters," Sullivan said.

Near the end of the auction, Sullivan spotted and planned to bid on a Last Supper depiction painted by Stanislaus Szczepaniak, the Benedictine sister who taught her mother art during the 1920s. A young couple who had asked Sullivan about her interest in the painting were among the bidders. At the end of the bidding for the painting -- which went for more than double Sullivan's highest bid -- she received a surprise when they turned around and told her they would let her have it for her bid and pay for the difference.

"I melted down," Sullivan said. "That's the kind of people that were there to get a piece of that monastery."

Anhalt, who also helped out with the auction, said she visited St. Scholastica often as a child because two of her mother's aunts were sisters at the monastery.

"It was special to me before I went to school there, and so I wouldn't have known where to begin," Anhalt said of the auction offerings. "Because of the sentimentality, I just thought, 'I'll stay here and sell cookies and sell pop, and then I won't have to cry.'"

Jennifer Burchett, St. Scholastica's spokesman, said the auction raised $142,989.47, all of which will be put toward the new monastery. The future of the former monastery is uncertain, although the community has hopes that an investor will take an interest in the building.

DeAngeli, who was re-elected in 2013 for another four-year term, agreed to stay on for another two years in 2017 to help see the new monastery project to its completion. In that time, the community of sisters sold the rest of the former St. Scholastica Academy to Trinity Junior High School -- which has been leasing part of the building for more than 20 years -- for $3 million last year. The school is also leasing land nearby that it will have the option to buy in 15 years if the money is raised, DeAngeli said.

Ravi Thiagarajan, St. Scholastica's chief financial officer for the past 14 years, said DeAngeli now has business acumen she didn't possess when she was first elected to lead the monastery.

"[DeAngeli] was already smart, but she's really come a long way," Thiagarajan said. "She has gained a lot of skills, a lot of business savvy."

Kimberly Prohaska, subprioress, will be installed as the monastery's administrator and spiritual leader during today's evening prayers until the sisters hold a new election for prioress in January. Facilitators also will come to spend time with the sisters in October to help them establish goals for their future.

Burchett said the new building represented a new chapter for the sisters in the life of the monastery, noting that the reduced number of sisters now puts the community's size more on par with traditional Benedictine communities in Europe.

"I think sometimes people look at the monastery and they get really sad because they see that majestic monastery high on the hill and they see it empty, and there is just a sad connotation with ... the sisters not being in it anymore," Burchett said. "But that's not all there is, because there's still a future. The sisters still look forward to what is to come ... they pray for new sisters every single day."

DeAngeli said she sees women who are answering the call to a vocation as a Benedictine sister not as a sign of someone who has not been successful outside monastery walls, but that for some, it's a second calling altogether. During the 19th century, many of the people who started monastery communities tended to be older in age, she said, and that the sisters were told years ago that the 19th century was considered the youth vocation of the early 20th century.

"It's an evolving process," DeAngeli said of the role vocations have played in society. "It's like an ebb and flow, and it has been that way through all Benedictine history ... you see that it has its ebb and flow, but the faithfulness of the sisters that remain, I think, give that flowing and ebbing life." 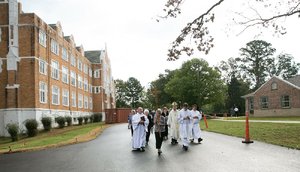 Photo by Special to the Democrat-Gazette/KAREN SCHWARTZ
A woman leads the procession bridging St. Scholastica Monastery’s past and future along the path between the former (left) and current residence of the sisters of the order dedicated to the practices of St. Benedict.