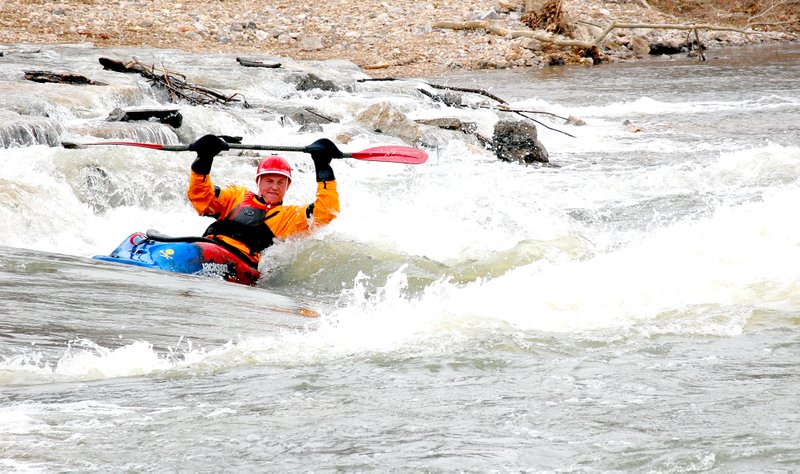 Jeff Della Rosa/Herald-Leader Mike Copeland of Fayetteville surfs in the second of the two drops at Siloam Springs Whitewater Recreation Park on Sunday. For more pictures and a story about what was going on Sunday, see page 6A.

SPRINGDALE -- White water and its enthusiasts might soon pour through the city if a few drops of interest turn into a destination park. Mayor Doug Sprouse said he'll appoint a task force in the next two weeks to consider the feasibility of building a water park in Springdale.

Joe Brooks, a local businessman, floated the idea to government officials and business leaders Friday at the Springdale Chamber of Commerce.

The adventure park would feature a man-made circuit for everything from kayaking down a white water course to floating in a lazy river on an inner tube, Brooks explained. Visitors could also flood to zip lines, rope courses, rock climbing walls, concert shells and more.

The size, cost and even organization of a white water park in Springdale would become apparent after a 10-week study with public input, said Scott Shipley, an engineer with S2o Design and Engineering in Colorado. And he said he wants to make certain the project wouldn't need a taxpayer subsidy.

Perry Webb, president of the Springdale Chamber of Commerce, said the park would become a destination in the region and would require a community investment similar to those that built The Jones Center and Arvest Ballpark.

"I remember when Mrs. Jones had this vision to turn an old truck terminal into a community center," said Perry Webb, speaking of The Jones Center.

Brooks said he envisions a cooperative effort to build the park, with Springdale providing the land and the maintenance. Springdale Water Utilities could pump the water and provide extra when needed.

He thinks private investors would pay for the enterprise.

Brooks also suggested a local commission, similar to the Public Facilities Board, could oversee the project. The board serves as the administration for Arvest Ballpark.

Webb said the task force the mayor appoints will consider the governance of the water park.

The idea of floating through downtown on Spring Creek got merely a nibble when a city leader threw the idea out 10 years ago, Webb said.

Brooks and his daughter Macy Brooks attended the annual Tuck Fest in April at the U.S. National White Water Center in North Carolina. Shipley's company built that park, which has become the Olympic training ground for white water sports.

Brooks said the company's North Carolina venue takes in about $40 million a year.

Brooks said Shipley's design company wants to take advantage of the natural areas the city holds just west of Lake Springdale, which is part of J.B. Hunt Park. Several springs in that area could provide most of the water needed for the park. Various trails -- including the Razorback Greenway -- crisscross the area. The city is building a mountain bike trail connecting Hunt park to the Arkansas Game & Fish Commission's nature center on 40th Street. And the urban forest around Rabbit Foot Lodge could provide space for more adventures like zip-lining.

The cost of admission and season passes for the North Carolina park seem reasonable, said Macy Brooks. Nathan Veal, a 17-year-old adventure-seeker in Oklahoma City, said Friday he paid about $135 for a day of white water rafting with his girlfriend last summer at the company's attraction in his hometown.

"Economically, it's a lot cheaper than packing up and going to the Buffalo (River)," Joe Brooks said.

"And you know you're going to get water," said Jason Daughtre, a local outdoor enthusiast who attended Friday's meeting. This year, the area has seen an unusual amount of rain, but typically the river does not flow enough water for a float in June.

"One big mission of this area has been to attract millennials to come here and work," Daughtre continued. "Then you want them to have something to do when they get here."

S2o built the Riversport Rapids Whitewater System in the Oklahoma City Boathouse District, which is adjacent to the city's Bricktown entertainment district.

Elizabeth Laurent with the OKC Boathouse Foundation said the Boathouse District sees from 350,000 to 400,000 visitors each year from all 50 states and more than a dozen countries.

DeLozier said she has participated in many of the activities at Riversport.

"I love them all. There are options for all types of abilities and ages. Our company and other groups I am involved with participate in team building exercises in the Boathouse District several times a year," she said.

Veal compared his downstream trip in Oklahoma City to time spent white water rafting down a river in Colorado.

Siloam Springs' Park Department manages a kayak park near the point where the Illinois River runs through the town.

About 600 cars come through the parking lot each week, estimated Holland Hayden, communications manager for the city.

The Siloam park offers no outfitters to rent rafts and kayaks and no concessions. Hayden said visitors must pack in everything -- much of it purchased from stores in the city.

"I think it would be wonderful and great for Springdale," Sprouse said of the white water park. "But I want to temper everybody's expectations at this point." He noted the city staff is already swimming in projects paid for by the nearly $16 million 2018 bond issue.