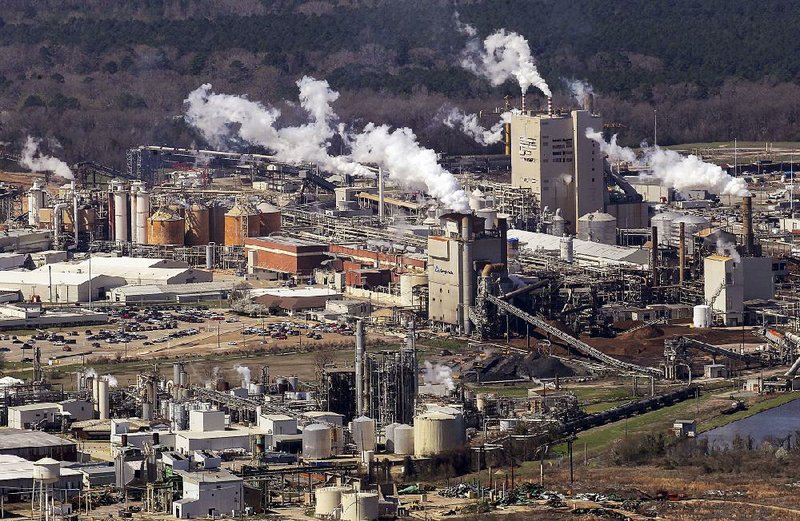 The Georgia-Pacific complex in Crossett, shown in March 2018, will lose 555 jobs in October, officials said Tuesday. In Hope, 100 workers will lose their jobs as that plant is closed.

A total of 655 workers in Crossett and Hope will lose their jobs in the next few months as Georgia-Pacific Corp. shuts down operations in those towns.

The company announced the news Tuesday, basing the decision "on an assessment of the [Crossett] mill's ability to compete effectively in the bleached board market."

The closing of the company's bleached board operations at the Crossett mill in October will affect 555 jobs, including 25 in sales and other business operations. Bleached board is used in paper plates, cups and cartons.

In Hope, where Georgia-Pacific operates a particle board facility, 100 workers will lose their jobs "over the next couple of months" when that plant is closed, the company said. Particle board is made from wood waste and used in construction and furniture. The closing of a similar plant in Monroeville, Ala., also with 100 workers, was announced Tuesday by Georgia-Pacific.

While the state has added thousands of jobs to its economy over the past three years, with many of them in manufacturing, announcements of plant closings and major job losses have been infrequent. One of the most recent came in December, when Kimberly-Clark Corp. said it would close its manufacturing facility in Conway by 2021, affecting 344 jobs.

In Crossett, the company will permanently shut down the bleached board machines, the extrusion plant, wood yard, pulp mill and a significant portion of the energy complex at the mill. It also will shut down one of the mill's older tissue machines that doesn't support the long-term competitiveness of the tissue business, the company said.

"I'm definitely going to feel the effects of this, but this isn't the first time for this kind of thing," said Becky Roberts, owner of Country Vittles restaurant on Main Street, two blocks south of Georgia-Pacific, recalling when the wood products company closed its plywood and lumber operations in 2011 because of weak demand for new-home construction.

About 700 people lost their jobs, according to news accounts then.

"People thought the town'd just dry up and blow away, but it didn't," Roberts said. "I have faith in the Lord that he's going to take care of it."

Roberts opened Country Vittles just three weeks after retiring from a 33-year career with the U.S. Postal Service. She'll mark her 20th anniversary in the restaurant business in November.

Georgia-Pacific employees were good for business, she said. Her husband retired from the company after 38 years.

"It's not the end of the world, but it will hurt," she said. "There will still be 500 or 600 people out there working. I have this little business here with 11 employees and I don't want anything to happen to add 11 to that number [of laid-off workers]."

Georgia-Pacific came to Crossett in 1962 when it purchased Crossett Lumber Co. and began producing tissue paper, later adding a chemicals plant. Koch Industries bought Georgia-Pacific for more than $13 billion in 2005 and took the public company private.

In Hope, Steve Harris, president of the Hempstead County Economic Development Corporation, called Georgia-Pacific a "local institution." The company came to Hope about 25 years ago.

"It's certainly not good news, and I hated hearing about it," Harris said.

Harris said his goal, first, is to help find jobs for the soon-to-be-jobless or find the training they need for new careers. The second, he said, is finding a new employer. "We'll work with GP in seeing that the old plant is listed and placed on the market," he said. "We're in the middle of the wood basket of the South."

Harris said Georgia-Pacific was the county's fourth-largest employer, well behind its largest -- Tyson Foods with some 1,300 employees and growers. He also cited Southern Bakeries, with about 300 workers, and New Millenium Building Systems, "with about 275 employees and growing."

"We'll miss GP, a good local company," Harris said. "I guess the good news for us is that we're fairly diversified in our manufacturing. We have a good industrial area, with plenty of power and utilities."

In a statement, Gov. Asa Hutchinson called Georgia-Pacific "a good partner" with the state for years and likely will continue to be. "Nevertheless, today's announcement is disappointing," Hutchinson said. "This is a tough hit to South Arkansas and all the families impacted."

Hutchinson and Mike Preston, executive director of the Arkansas Economic Development Commission, were scheduled to have a telephone conference call later Tuesday with Christian Fischer, Georgia-Pacific's president and chief executive officer. Hutchinson said that conversation was needed "to understand more fully the reasons behind this decision."

He said the commission and other agencies in his administration are "focused on providing all available resources and necessary training to ensure that those who are losing their jobs later in the year are given every opportunity to secure new employment here in Arkansas."

"The aim of the Arkansas Economic Development Commission is to retain, protect and grow our existing businesses and their number of jobs," Preston said. "However, when that cannot be achieved, we work with our statewide partners -- including Workforce Services, the Governor's Dislocated Workers Taskforce, chambers of commerce, and private industry -- to ensure those Arkansans who are losing jobs are provided with resources to help position them for a new job in their current industry or train for a different field. Workers in the timber industry are highly skilled and employable, and we will work to ensure their livelihoods are impacted as little as possible."

With a population of about 5,500, Crossett is the largest city in Ashley County. The county had an unemployment rate of 4.8% in April.

"It is with sad hearts and many prayers that we reflect on the news about the job loss at the Georgia-Pacific Crossett facility," Mike Smith, executive director of the Crossett Economic Development Commission, said in a statement. "As always, we are confident that the Crossett Spirit will hold true and keep us moving forward."

Koch Industries and Georgia-Pacific have facilities throughout much of Arkansas, including GP Harmon Recycling in Fayetteville, the Dixie Cup plant in Fort Smith and other operations in Fordyce and Gurdon. The companies spend $191 million per year on wages and benefits for workers at the Arkansas locations, Jennifer King, a spokesman for the company, told the Democrat-Gazette last year.

"During the next month, Georgia-Pacific will begin discussions with union leadership and the hourly and salaried workforce on how the process will work for employees affected by the job reductions, including the potential to transfer to other Georgia-Pacific locations," the company said. "The company will also begin working with its customers on transitioning their bleached board product supply."

Georgia-Pacific's bleached board business, including supply to the Dixie business, will be supported from mills in Naheola, Ala., and Brewton, Ala., and an extrusion facility in St. Marys, Ga.