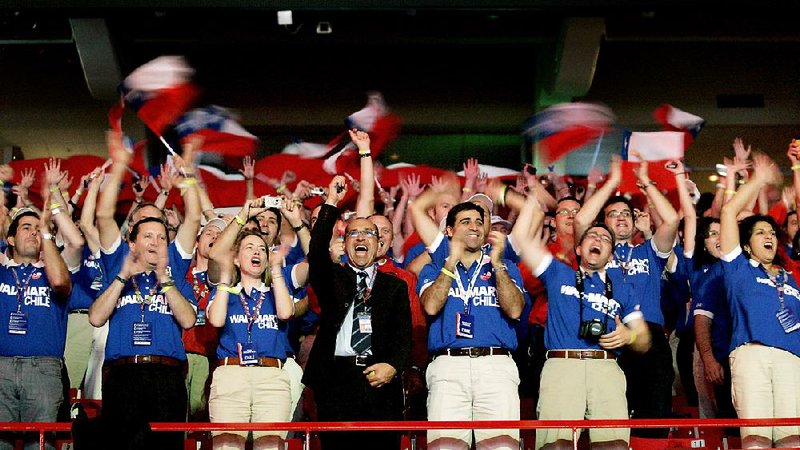 Walmart employees from Chile cheer from their seats in Bud Walton Arena during the 2009 Walmart shareholders meeting in Fayetteville. Analysts will watch during the week for any clues Walmart may give about its direction in the year ahead.

FAYETTEVILLE -- About 16,000 people from around the world will converge on Northwest Arkansas this week for Walmart Inc.'s annual shareholders meeting and celebration for employees.

While the latter event, held Friday morning and known for its partylike atmosphere with A-list celebrities, typically draws the most attention, this year's formal business meeting on Wednesday is already grabbing much of the spotlight. That's because presidential candidate Sen. Bernie Sanders is scheduled to attend to present a proposal filed by a Walmart employee and shareholder seeking to add an hourly employee to Walmart's board of directors.

Carolyn Davis, who is also a member of the grassroots group United for Respect, invited Sanders to present her proposal. Sanders, an independent from Vermont who is running for president as a Democrat, has challenged large employers, such as Walmart and Amazon.com, to increase workers' pay and improve benefits, such as paid sick leave.

The Wednesday meeting starts at 10:30 a.m. at the John Q. Hammons Center in Rogers.

Wednesday's agenda also includes votes on two shareholder proposals listed in the Bentonville retailer's recent proxy statement: a request to strengthen prevention of workplace sexual harassment, and a request to adopt cumulative voting. Walmart's board of directors has recommended shareholders reject both proposals.

Wednesday evening, Walmart employees will be treated to a free concert at Bud Walton Arena on the University of Arkansas, Fayetteville campus. On Thursday, the retailer will host tours of its stores and clubs. Another popular spot for visitors during shareholders week is the Walmart Museum, Sam Walton's original Five and Dime in downtown Bentonville.

All the activities lead up to the main event -- Friday's star-studded celebration and business update for employees and shareholders. It will be held at Bud Walton Arena starting at 8 a.m.

The celebrity emcee and guest artists are always a closely kept secret until the big day. Past hosts have included Justin Timberlake, Will Smith, Jamie Foxx and Hugh Jackman, with performances by musical artists such as Beyonce, Jennifer Lopez, Garth Brooks and Taylor Swift.

Besides the entertainment, attendees will hear a brief summary of voting results from the formal business meeting and presentations by Walmart executives. After the event, McMillon will lead a question-and-answer session for investors.

Both the Wednesday business meeting and the Friday celebration will be live-streamed at stock.walmart.com.

Retail analysts will be paying close attention during the week to any clues Walmart gives regarding its direction in the year ahead. Several predict e-commerce, particularly online grocery sales, will remain a key focus area for the retailer.

Brian Yarbrough, a retail analyst with Edward Jones, said Walmart has done "a pretty tremendous job" of improving its stores and operations, so the big opportunity now lies in expanding delivery and pickup options for online grocery orders and becoming more efficient in these areas.

"I think anything they'll continue to do will push the envelope on offering the consumer convenience," Yarbrough said. "And allowing the customer to shop when they want, how they want and where they want."

This omnichannel approach gives Walmart a potential edge over rival Amazon, said Carol Spieckerman, a retail consultant and president of Spieckerman Retail. The new talent that has come with Walmart's acquisitions, and especially the hiring announced last week of Google and Amazon veteran Suresh Kumar for the new position of global chief technology officer and chief development officer, lead Spieckerman to expect "exciting developments" ahead.

"All of it points to Walmart being in a position to replicate innovations that are working for competitors but, more importantly, to create original solutions that will that will have others, including Amazon, scrambling to catch up," Spieckerman said. "Walmart has never been in a better position to leverage its massive, multiformat scale to drive its digital business.

"Amazon has yet to prove that it has the chops to fully synergize digital and physical" commerce, she said. "It's still primarily a single-channel operator, albeit a formidable one."

"A bit of reckoning could be afoot," she said. "Amazon could very well find itself on the hot seat and Walmart could benefit from the contrast."

However, Walmart needs to continue working on increasing the profitability of its e-commerce business, both short term and long term, analysts said. Though e-commerce sales typically make large gains each quarter, the sector continues losing money because of the large investments, such as the $16 billion acquisition of Flipkart Group in 2018.

Laura Kennedy, vice president at Kantar Consulting, noted that McMillon has talked frankly about looking for new sources of revenue, especially in Walmart's advertising business. She said the company also continues "to squeeze everything they can out of each store," turning to automation to handle tasks in stores as well as those that buyers undertake, such as how they make decisions and how they use data.

"Those are the some of the ones we already know about," Kennedy said. "I have to imagine that's what they're going to be talking about a lot [this] week."

"I don't think they have to go from losing money to making money," Yarbrough said, but "as long as they're trending toward profitability, I think investors are willing to wait however long as it takes." 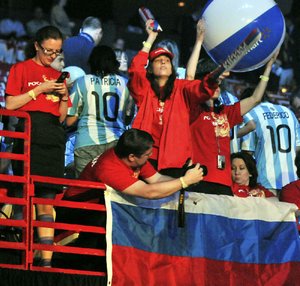 Photo by Arkansas Democrat-Gazette file photo
Walmart employees from Russia wait for the start of Walmart’s annual shareholders meeting in Fayetteville in 2010.