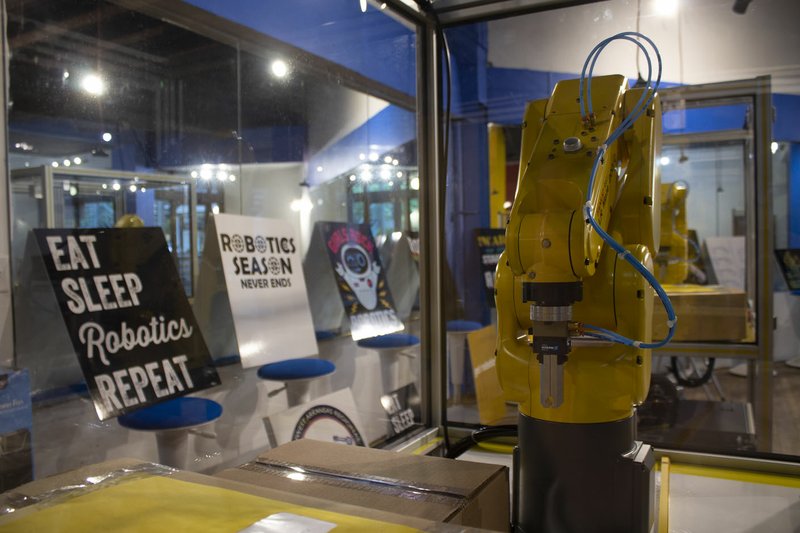 NWA Democrat-Gazette/ELIZABETH GREEN A FANUC robot Wednesday at the Northwest Arkansas Robotics Training Center in Fayetteville. The Chamber of Commerce plans to launch its robotics training center this month, three years after its original target date.

FAYETTEVILLE -- The Chamber of Commerce plans to launch its robotics training center this month, three years after its original target date.

In 2016, the chamber received a $450,000 grant from the U.S. Economic Development Administration to start the Northwest Arkansas Robotics Training Center.

Steve Clark, president and CEO of the Fayetteville Chamber of Commerce, said at the time he expected the first graduates that fall.

Clark said the reason for the delay in the center's opening was an issue with its original location, which was moved twice because of changes in availability.

The first location change occurred when the Chamber of Commerce decided to sell the original building that was to be used for the robotics center -- the old chamber offices at 123 W. Mountain St. The University of Arkansas approached the chamber in 2016 with an offer to purchase the building for $850,000. The university opened the Brewer Family Entrepreneurship Hub in that space in 2017.

"It was an offer that a good and prudent businessman would accept," Clark said.

A second, potentially larger, location was then proposed and approved by the Economic Development Administration, but an investor in that project decided to pursue another deal, Clark said.

The center finally found its home at 21 W. Mountain St., which the chamber board purchased for its new offices in 2015. A tenant left after a rent increase, and the space went to the robotics center.

Because of the location changes, two separate amendments had to be filed with the Economic Development Administration, Clark said. It took several months for each amendment to be filed and approved, he said.

None of the grant money was spent during this time, but with the amendments came an adjustment in the robotics center's award amount. The Economic Development Administration lowered the amount from $450,000 to $336,003 in 2017, as the department factored out costs such as hiring staff and purchasing certain equipment, both of which it wouldn't pay for.

The money from the grant is to be used explicitly to buy robots for the program. So far, Clark said, they have five robots.

John Atwood, who works in public affairs for the Economic Development Administration, said the delays and amendments aren't unusual. 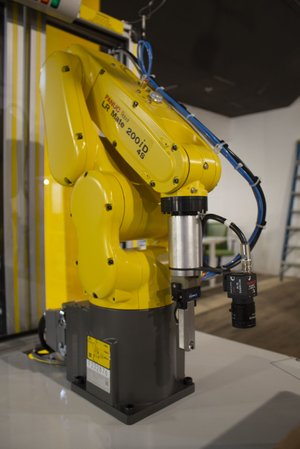 The robotics center will provide training in robotics and automation for employees, companies and students by collaborating with Northwest Arkansas Community College to offer the course, called FANUC Certified Robot Operator-1. It will certify those who wish to become robotics technicians.

FANUC, which stands for Fuji Automatic Numerical Control, is a global automation company providing training programs, according to information on its website. The curriculum is taught as a semester-long course in community colleges in Illinois and Michigan, but Clark said the Fayetteville location will be the only one to offer the program in such a condensed time frame.

"If you're Tyson, or Walmart or J.B. Hunt, you don't want to wait four months," Clark said.

The 32-hour program is completed in one week, and it will cost students $1,995, Clark said. Classes are scheduled to begin June 24, according to enrollment information from NWACC. They will be taught year-round.

Paul Aiello, the director of FANUC Certified Education Training, said FANUC partners with around 1,000 schools in the U.S. It typically takes over a year for schools to become acclimated with the material and implement the academic program, he said. Representatives from FANUC will visit the site and audit both the equipment and instructors to make sure they are up to the company's standards.

"We don't try and rush the school," Aiello said. "We want them to move at the speed they need to."

He said they are looking forward to bringing the training and skills closer to manufacturers in the Northwest Arkansas area, such as Tyson, and developing a "pipeline of human resources."

Clark emphasized the importance of having this training available to students and companies in the area, as automation is changing the way many companies operate.

Commercial robots are used in all areas of the workforce, and Aiello said about half of all robots installed in the U.S. are FANUC robots. Within a 250-mile radius of Fayetteville, Clark said there are more than 4,000 FANUC robots operating. Walmart, for example, uses robots to help with inventory in its stores.

Jeff Cooperstein, an economist with the UA Center for Business and Economic Research, said this program will benefit the area by increasing the technological skill of the local workforce. Although not all companies use robots, they do use technology, and there is an ever-increasing demand for technological skill-based workers, he said. This program will create a supply for the demand.

Josh Watson, who works on behalf of the Fayetteville Chamber and NWACC, was named the director of the robotics training center and is the only instructor so far.

"I'm a very hands-on teacher," Watson said. "I've always kind of valued that, because a lot of people learn hands-on."

Watson said students do not have to come into the program with a complete understanding of robotics, though it does help to be familiar with the basics.

Officials with the Northwest Arkansas Robotics Training Center will hold a news conference at 11 a.m. Thursday to detail the program.