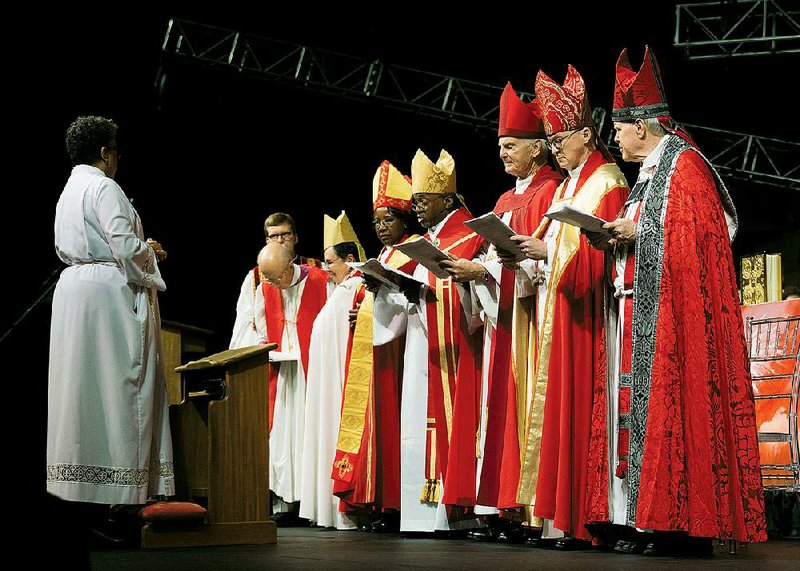 The Rt. Rev. Phoebe Roaf had an understanding of a god as a supreme but distant being during her childhood in Pine Bluff.

"It took me some maturity to begin to see God as close and personal and directly involved in the events of my life," Roaf said. "As a girl, I didn't perceive that, so I've definitely had a journey with the Lord."

That journey reached its latest juncture May 4 when 55-year-old Roaf -- who most recently served as rector at St. Philip's Episcopal Church in Richmond, Va. -- was consecrated as the fourth bishop of the West Tennessee Episcopal Diocese at Hope Church in Cordova, Tenn.

There, Roaf answered questions from bishops with her commitments to obeying Christ, continued proclaiming of the gospel, and supporting the people in her ministry.

"My sister, people have chosen you and have affirmed their trust in you by acclaiming your election [to] Bishop in God's holy church," said the Most Rev. Michael Curry during the ceremony. "Are you persuaded that God has called you to the office of bishop?"

"I am so persuaded," Roaf said.

Roaf's consecration cemented her place in history as the first black woman to serve as bishop in a diocese in the South , the fifth to be consecrated a bishop in the Episcopal Church, and the first to lead the West Tennessee diocese. Roaf succeeds the Rt. Rev. Don Johnson, who retired after serving the diocese in the role of bishop since 2001.

Roaf is the daughter of the late Clifton Roaf, a dentist originally from Pine Bluff, and the late Andree Layton Roaf, the first black woman to serve on the Arkansas Supreme Court. The oldest of four children including Mary and Andrew, Phoebe Roaf's most well-known sibling is Willie Roaf, a former offensive lineman for the New Orleans Saints and Kansas City Chiefs who was inducted into the NFL Hall of Fame in 2012.

She became involved with the church's youth group, Young Episcopal Churchmen, and as a senior in high school became president of the youth group for the state's Episcopal diocese after holding leadership positions in the organization.

"Being in church gave me the first opportunities at public speaking, which was very important -- learning the little verses of Scripture for either the Easter pageant or the Christmas pageant," Roaf said. "It was always a safe place for me, a place where my gifts and skills were acknowledged and acclaimed.

"The church family was very proud of the things that I accomplished, just like my biological family, and a place where people were always so supportive."

Bob Hart, a member of Grace Episcopal in Pine Bluff since 1975, recalled Roaf as a "very accomplished" teenager.

"She was obviously from a very outstanding family ... and she went on to do great things," said Hart, who attended the consecration with his wife, Marjie, and several other people associated with Grace Episcopal.

"I kind of always thought that she would eventually become a priest," Bob Hart said. "I don't have anything I can hang my hat on about that. She's just such an outstanding person. There's a lot of intangibles there."

Roaf went on to earn an undergraduate degree at Harvard University in Cambridge, Mass., where she attended nondenominational services led by author and renowned preacher the Rev. Peter Gomes, before earning a graduate degree in public policy at Princeton and beginning a career while maintaining her faith as a lay member of the church.

"I was always sort of seeking and searching for a deeper relationship with the Lord, and thought the best way to do that was to be part of a faith community," Roaf said.

She returned to Arkansas to earn a law degree at the University of Arkansas at Little Rock School of Law, graduating from the school 20 years after her mother. Phoebe Roaf clerked for Judge James Dennis, U.S. Court of Appeals for the Fifth Circuit, and later practiced commercial real estate law in New Orleans.

Still, she said, it took nearly "15 years of other people saying to me, 'Phoebe, I think you're called to be an Episcopal priest' before I could see it myself."

Roaf graduated from Virginia Theological Seminary in 2008 before serving as associate rector at Trinity Episcopal Church in New Orleans, and being called as rector of St. Philip's in Richmond, Va. in 2011.

HARRIS WAS A TRAILBLAZER

Women were first ordained into Episcopal priesthood in the 1970s, and the Rt. Rev. Barbara Harris was the first black woman to be consecrated as bishop in 1989. Roaf said Harris was a trailblazer, noting that women and men were instrumental in supporting ordination of female bishops in the church.

"[Harris] has a number of years in the House of Bishops where literally she was the only woman, so I can't imagine what it was like for her," Roaf said. "I'm definitely sitting where I'm sitting because a lot of other women advocated for female ordination overall ... [and] men too. ... It was a very committed group of men and women who had this vision that God can call anybody to serve God.

"That's been one of the things that's kept me as a member of this denomination, you know, as a layperson and now as a priest, and those conversations are very difficult and very complicated and they're very painful, and yet I'm thankful."

The Rt. Rev. Herbert Donovan, bishop of the Episcopal Diocese of Arkansas from 1981-93, traveled with his wife, author and historian Mary Donovan, from Colorado to Cordova, Tenn., to attend the consecration ceremony May 4.

Herbert Donovan, who also attended Harris' consecration 30 years ago, said Roaf was the youth representative on the electing committee during the search for a new Episcopal bishop that concluded with his election. He came on board in the diocese several years after the Rev. Peggy Bosmyer's ordination in 1977 as the diocese's first female Episcopal priest.

"It's that great strain of female leadership supporting each other that Phoebe is a part of," Donovan said. "And that's why [her consecration]means a great deal to us."

Candace McRae Walsh, a member of the transition committee serving the West Tennessee diocese, said Roaf's forthright manner and the specific way in which she answered questions from members of the diocese swung the vote for bishop in her favor.

"I could see in the faces of all those people who had a chance to meet those candidates that they really resonated with her sincerity," Walsh said. "She was very honest to say, 'Look, I don't know you guys at all. I don't know what you've been through. I don't know anything other than what I've read about you.' But she said, 'I'm excited to get on this journey with you.'"

Walsh, a member of Emmanuel Episcopal Church in Memphis and an instructor at the University of Memphis, said when Roaf was elected to be the fourth bishop of the diocese in November -- a territory comprising more than 8.200 members -- she danced and cried.

"It reminded me so much of [President] Barack Obama, because I remember the night that he was elected, and I was sitting there wishing for my mother and grandmother and all the people who had passed away because it was such a historic moment," Walsh said of Obama's election. "That's kind of how it felt. But then I began to realize that it's historic, but [Roaf] still has work to do and we've got to support her."

Roaf said her goal during the first year is simply to listen and build relationships that foster a safe environment where difficult conversations can be had when necessary, and eventually find ways to be in conversation and in relationship with people who aren't Episcopalians as part of a larger family.

"You know, Genesis 1: Everybody is created in God's image," Roaf said. "There are no asterisks, there are no exceptions. ... If you read the Psalms, all creation is part of God's plan for salvation. So that, for me, means there are implications for how we treat animals ... the environment, the air, the soil, the water -- because God created all of that as well.

"So when I talk about family, for me it's pretty broad."

Photo by Special to the Democrat-Gazette/CINDY MCMILLION
The Rt. Rev. Phoebe Roaf leads a service of Holy Eucharist during her consecration ceremony May 4 at Hope Church in Cordova, Tenn.

Print Headline: On a journey with the Lord