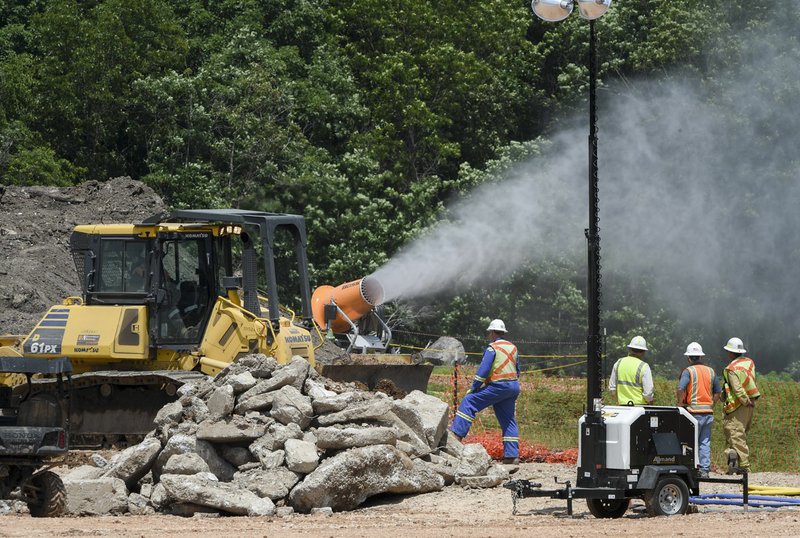 BELLA VISTA -- Contractors continue to extinguish "hot spots" at an old stump dump, and the underground fire appears to be corralled after burning for more than nine months, according to the Bella Vista Property Owners Association.

No evidence of fire was reported at the site, according to the association website Friday. Smoke still coming from the site is associated with the excavation of the hot spots, which are on the northwestern corner, according to the website.

To get updates on the work being done at the former stump dump site on Trafalgar Road, visit www.bellavistapoa.com/Trafalgarfire.

"That's great news," Mayor Peter Christie said Friday. "I've been pleased with the quick response and the work that has been done."

Three contractors started work May 18 after the association took the job of extinguishing the fire and cleaning the site from the Arkansas Department of Environmental Quality on May 3.

The association operated the dump on leased land from December 2003 to Dec. 31, 2016, when it was covered with soil, said Tom Judson, the association's chief operating officer. No one monitored the site the last few years it was open, but staff members would remove trash when possible, he said. The property is now owned by Brown's Tree Care.

The plan is to have the fire extinguished within 30 days at a cost of around $4 million, Judson said. E3 Environmental from Clinton, Miss., was tasked with putting out the fire.

City firefighters discovered the fire on Trafalgar Road on July 29.

"I am delighted that they have not found any thing nasty," Christie said.

Contractors continue to stress the air quality for the remainder of the excavation work could be in the "unhealthy" range and higher, as defined by U.S. Environmental Protection Agency.

State officials urged residents near the fire in December to avoid prolonged or heavy exertion outdoors after an "unhealthy" air quality reading in the area. That guidance remains in place, said Meg Mirivel with state Department of Health.

Little Rock-based CTEH, another contractor hired by the association, continues to monitor the air quality during the excavation, Judson said.

"That will be a major milestone -- to get it back to the way it was," Christie said of the remediation.