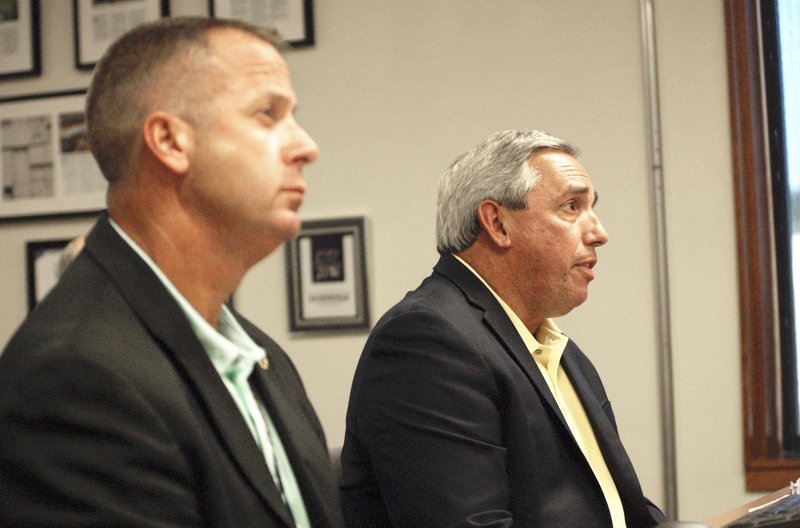 FAYETTEVILLE -- The city's top two police officers told the City Council the department has done what it can to keep residents safe and provided statistics and information they said back up that claim.

Police Chief Greg Tabor and Deputy Chief Mike Reynolds gave council members a presentation on overall police activity, misdemeanor marijuana enforcement and the 4th Judicial District Drug Task Force, of which the city is a member. Mayor Lioneld Jordan requested the presentation be given during the council's session Tuesday.

Does the department's presentation show that the city has made misdemeanor marijuana offenses the lowest priority?

Jordan made the request after the nonprofit Arkansas Justice Collective last month released a report scrutinizing the city's enforcement and prosecution policies regarding marijuana offenses. The report highlighted statistics and suggested the city hadn't been following a 2008 voter initiative to make misdemeanor marijuana offenses the lowest priority.

The report from the collective says police made 50 arrests or citations in 2008 for possession only, compared to 192 in 2018. That equates to a 284% increase when comparing the two years.

The presentation the council saw Tuesday made a distinction between arrests and citations. Of the 50 in 2008, 35 were arrested and 15 were given citations. In 2018, police made 38 arrests for possession only, with 154 citations issued, giving the 192 total, according to the presentation.

Before that, people were issued a citation under rare circumstances, Tabor said. An officer who found someone with a small amount of marijuana most often would have to take them to jail for processing, Tabor said. With Stewart's authorization, officers could give the person a ticket, he said.

The report from the collective also says 142 of the 541 arrests or citations given last year for all misdemeanor marijuana offenses were of black people, which comprises 26% of the total. The black population of the city last year was 5,986, or about 7%, according to U.S. Census data.

Tabor said a sampling of all arrests and citations showed 55% were of people listing a city address as their residence, with 45% from outside. The presentation also included a heat map of the city showing where officers receive the most emergency calls, which dictates where officers spend their time, he said.

Tabor said he provided the statistic to show a broad picture of police interaction, not just misdemeanor marijuana offenses.

"They're not exactly even, but we feel like 2% is pretty close," Tabor said.

An increasing proportion of the Drug Task Force's arrests have been made for the big four drugs -- methamphetamine, opioids, cocaine and heroin -- over the last three years, according to the presentation. In 2017, 75% of arrests made were for those four drugs, with 15% of arrests made for marijuana as the highest level of offense.

Last year, the portion of arrests for the big four drugs went up to 82%, with 10% for marijuana. Up to May 31, this year's big four arrests have been 85% of the total, with 8% for marijuana, according to the presentation.

Violent crime in the city, meaning homicide, rape, robbery and aggravated assault, also has gone down over the last three years, Tabor said.

The city will begin posting weekly crime and arrest statistics to its website, at Jordan's direction.

"This is going to be an ongoing process," he said. "It's not like we're just going to give this report and then we're all done and everybody moves on."