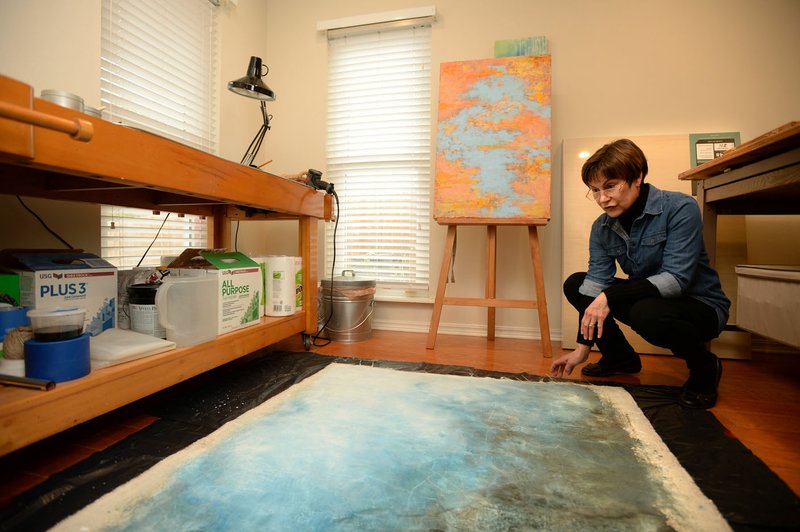 Images depicting a guitar player strumming in front of a painting, a writer glancing up from a laptop and a singer belting out a tune flashed across the screen, followed by snapshots of apartments across the country where artists can live and work.

Representatives from Artspace Projects showed the images and explained their development process to more than 150 people Wednesday night at the Mosaic Templars Cultural Center in downtown Little Rock.

Artspace officials spent Tuesday through Thursday in Little Rock and North Little Rock considering whether the area would be a good spot for a new development. The Minneapolis-based nonprofit group develops spaces for low-income artists to live and work.

The group defines "artist" as anyone working in a creative field -- from musicians and graphic designers to painters and writers. It develops housing, work space and a combination of the two for creative people.

"My gut [feeling] is that there is something really special here that we can work with," said Wendy Holmes, senior vice president of consulting and strategic partnerships at Artspace.

Artspace staff members met with city leaders, local entrepreneurs and artists. They also toured Little Rock and North Little Rock and conducted a public meeting to get feedback on the potential project.

The group used a Memphis building as an example of the combination of private and public dollars it uses to get its projects going. The South Main Artspace Lofts in Memphis used low-income housing tax credits, federal historic tax credits, federal HOME money, donations and a private loan.

Based on last week's central Arkansas visit, Artspace will release a preliminary feasibility study in September.

The next step, which will launch Sept. 25, will be an arts market study to assess local artists' needs. That will be followed by discussions on project predevelopment in early 2020, according to the slide show the Artspace staff presented Wednesday.

The nonprofit group began in 1979 and has 52 projects in operation or development across 23 states. The group is planning a live-work space in Bentonville.

Little Rock has had such a space before. Officials designated the Kramer School as live-work spaces for artists in 1997, but the facility was sold to a private firm in 2015. News coverage of the Kramer School before it was sold detailed tenant claims the living conditions were substandard and no longer a haven dedicated to art.

One attendee questioned whether the Artspace staff members knew about the Kramer School, to which they replied they had researched all previous projects to provide affordable housing to artists, including the Kramer School.

"It's an incredible opportunity for central Arkansas," Nathan Hamilton, the North Little Rock communications director, said of Artspace. "The arts are a huge economic boon for a city; the creativity and the cachet that they give a town is incredible."

Hamilton was part of a group of about 11 officials and others that went on a bus tour with Artspace staff members to get a sense of the geographic makeup of the area and its neighborhoods.

Deaver said the city has long been aware of a need for affordable housing and work space for artists.

Bryan Frazier, a Little Rock artist and musician, said he was part of a focus group of about 20 people who answered questions about Little Rock's art community and its needs.

He also brought up the "family-oriented" atmosphere of the area and told Artspace staff members any housing should be family-friendly.

Mariah Hatta, who does ceramics in her spare time, attended Wednesday's meeting and said she was hopeful Artspace would decide to start developing in Little Rock because even artists like herself, who get most of their incomes from other sources, need affordable housing.

"You can be a professional and still need lower-income housing," Hatta said. "We need a true mix [of housing]."

Artspace's trip to the area was mostly a fact-finding mission, Deaver said, but the nonprofit group's staff saw lots of interest in the idea from community members.

"We were genuinely overwhelmed by the immense interest and thoughtfulness and community spirit of Little Rock and North Little Rock," Deaver said.