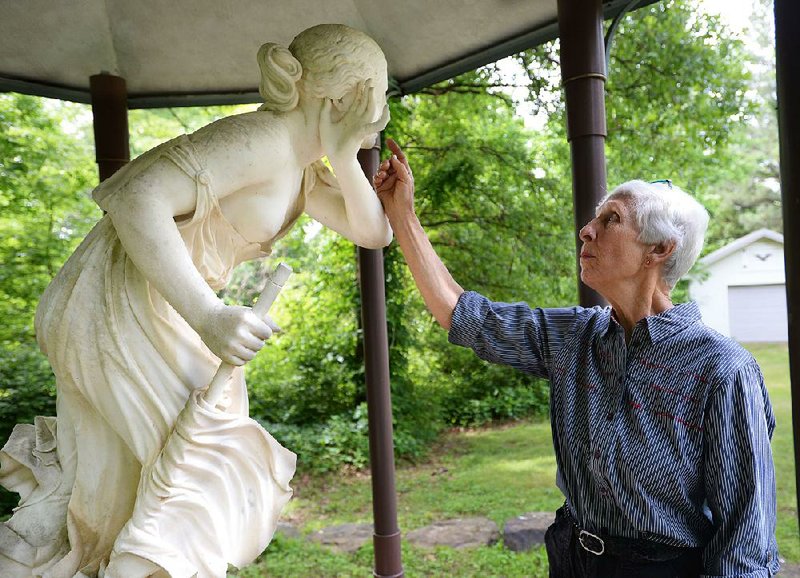 Joyce Hale tends to the sculpture Nydia, The Blind Flower Girl of Pompeii by Randolph Rogers in the backyard of her Fayetteville home. - Photo by Andy Shupe

SPRINGDALE -- A photograph in a museum archive revived the story of two Springdale legendary street-crossed lovers.

For many years, a sculpture of a beautiful woman stood in front of a motor court hotel on North Thompson Street appearing to gaze across the street to a manly sailor statue in front of Steele Canning Co.

The female statue was thought to be Diana, goddess of the hunt. The man was Popeye, the sailor man. Diana stood on the west side while Popeye flexed his muscles with a can of spinach on the east.

But their love was ill-fated. Around the 1970s, Diana was taken away.

Recently, Marie Demeroukas, photo archivist at the Shiloh Museum of Ozark History, ran across the photograph in a collection of donated pictures of The Springdale News, a predecessor to the Northwest Arkansas Democrat-Gazette.

The late Charles Bickford took the photograph. Demeroukas found herself drawn to the photograph because the female statue now stands in the backyard of her friends Jay and Joyce Hale in Fayetteville.

The story of this Diana dates back to the 1940s.

After World War II, the Diana Motor Court provided an income for Toy and Bertha Neal, a young couple who returned to Springdale in 1944 after Toy completed his service with the 1st Marine Division, says their great-grandson Micah Neal.

They borrowed $5,000 from Charlie George, the founder of poultry plant George's Inc. and who was Bertha's uncle.

"They were going to grow chickens for George's, but my great-grandmother was allergic to chicken feathers," Neal said. "So they built the restaurant and motel."

Micah said the motor court consisted of one-room cabins or lodges, popular back in the day when America was in love with Route 66 and road trips.

Toy and Bertha eventually sold the land on which the motel stood to Sam Mathias, a Springdale real estate developer. That's where Mathias built Mathias Boots in the 1970s.

"The Diana statue, while a point of interest for the motor court, really didn't belong in a retail parking lot, so we removed it and stored it for safety," Mathias said. "That's all I recall about the statue."

Joyce Hale remembers the end of Diana's reign at the motor court differently, though.

Joyce, who worked in the area, said she drove past the statue nearly every day.

"I thought she was such a beauty."

One day, Joyce noticed construction at the old motel site and worried that the statue would be knocked off her high pedestal. She talked to a worker, who put her in touch with a woman out of state who owned the statue.

The woman was willing to sell Diana locally rather than to a museum in Oklahoma City, Joyce said.

So Diana moved to a new site at the Hales' business in Pea Ridge.

Joyce said she thought the statue was concrete until she got a closer look at it in 1976 and found that Diana was made of Carrara marble.

And the sculpture bore a signature and a date: Randolph Rogers, 1860.

"We were shocked because we never buy art," Joyce said. "We thought maybe she was worth something."

So, they set out to research her. The only identification other than the signature was a sign on the statue at the motor lodge, which identified her as Diana.

In 1976, Lewis Shepherd, an art appraiser in Boston, wrote the Hales: "What you have is not Diana by Rogers, but Nydia, Randolph Rogers' most famous composition," he wrote. "You have a real treasure that is worth five times what you paid for it."

Shepherd noted in a different letter that the Hales had paid $3,000 for it.

"We are really attached to her outside of her value," Joyce says. "We consider her a member of the family."

So who was Nydia?

Nydia was a blind flower girl brought to life in the 1834 book, The Last Days of Pompeii, by Edward George Earle Lytton Bulwer-Lytton, the first Baron Lytton.

In the 1830s, excavation of Pompeii was underway. The ancient city had been buried under the volcanic ash of Mount Vesuvius, and the archaeology captured the interest of society, Joyce said. The excavation inspired Bulwer-Lytton's story, and his story inspired Rogers' sculpture.

Rogers grew up in Ann Arbor, Mich., according to the website of the Smithsonian American Art Museum. The museum curates several of his works, including a twin of the Hales' Nydia, its full name is the Nydia, the Blind Flower Girl of Pompeii.

Roger won international acclaim for his figure of Nydia. The Met's website calls it "the most popular American sculpture of the nineteenth century."

"Nydia was the blind servant in a wealthy household," Joyce said, sharing the mythological story. "She had an unrequited, silent love for a member of the household."

Ash from the volcanic eruption in A.D. 79 darkened the skies of the Roman city, but it was not a hindrance for the girl, who knew how to travel the streets by feel, Joyce said. Nydia's secret love, Glaucus, loved another. During the eruption, Nydia led Glaucus and his love to the safety of boats in the city's harbor.

The statue of Nydia shows her left hand cupped to her right ear. Hale explained that the young couple got separated from Nydia as they raced to safety, so she was listening to find them in the confusion of the city. She found them and led them through back streets, away from falling buildings, as they continued their flight.

Then, "rather than risk seeing Glaucus in heaven with his love, she commits the sin of suicide to avoid the encounter," Joyce said. "It's such a Victorian drama. She's pining for her love."

When the Hales got Nydia, the statue was missing a finger, a staff and part of its upper lip, which looked like it had been shot with a BB gun, Joyce said. Those flaws were fixed in a restoration that the Hales commissioned.

Today, Nydia stands 5 feet tall on a pedestal under a steel gazebo in the Hales' yard.

But that's not the end of the story. How the statue first got to Springdale isn't known for sure.

Joyce speculated that a local gallery owner, Dallas Barrack, bought the piece from an estate in the Northeast.

The families of the gilded age would sell off their estates piece by piece -- furniture, rugs, statues -- when they fell on hard times, Joyce said.

"Nydia may have come from a chic estate. We don't know these details."

A 2011 letter from the late Bruce Vaughan, a local historian, to Demeroukas at the museum, explained that Barrack had a "picker" in Chicago and owned a tractor-trailer. The picker made a round trip with items from Chicago to Springdale each week.

As for Popeye, he remains a man of mystery.

Joe Brooks, grandson of Joe Steele, who founded Steele Canning Co., said the statue transferred along with the Popeye brand to Allen Canning Co. Allen bought the brand in the 1970s and ran it as part of his Sager Creek Foods. After several sales and acquisitions, McCall Farms now sells spinach under the Popeye brand.

The original Popeye statue was moved, and its whereabouts are unknown.

"They were boyfriend and girlfriend," Micah Neal said of the two old landmarks.

Print Headline: Popeye and his Pompeiian lover remembered in Springdale