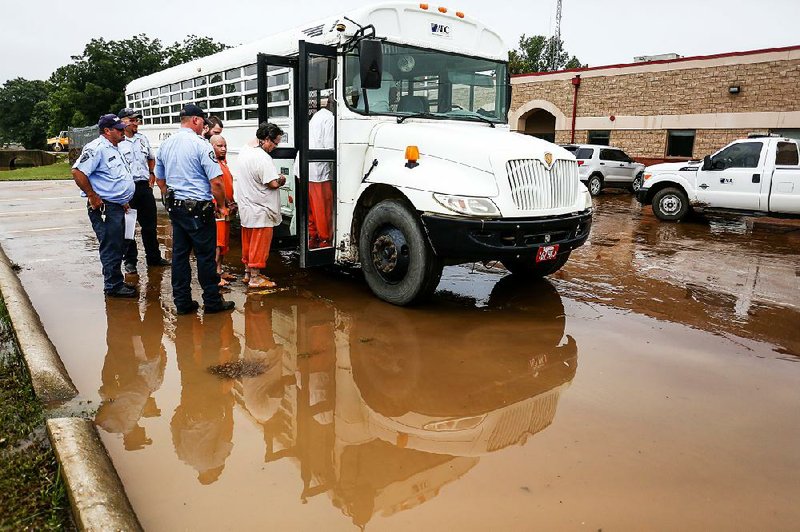 Inmates from the Howard County jail load up on a bus Tuesday in Nashville after the jail was flooded. About 30 inmates had to be moved to another facility, officials said Wednesday.

Recovery efforts were underway Wednesday in southeastern and south-central Arkansas after the remnants of Tropical Depression Barry dumped more than 11 inches of rain over a 24-hour period in some areas, damaging homes and businesses, and washing out roads.

Arkansas Department of Emergency Management officials said they were still collecting data Wednesday in Howard, Clark, Nevada and Pike counties to determine whether the damage reaches the threshold required for state or federal assistance.

No deaths or injuries related to flooding were reported, said Barbara Hager, a department spokesman.

The National Weather Service in North Little Rock said more than a foot of rain fell in parts of southwest Arkansas, with the highest amounts falling in an area stretching from northern Howard County to southwest Clark County.

A National Weather Service cooperative observer reported a 24-hour rainfall measurement of 16.17 inches in Dierks, in Howard County. The measurement covered the period between 1 p.m. Monday and 1 p.m. Tuesday as the last bands of the storm system moved through the area, said meteorologist Chris Nuttall of the National Weather Service in Shreveport.

"It's the highest amount recorded in our warning area, Nuttall said.

Arkadelphia, in Clark County, received 8.70 inches of rain over a 72-hour period, according to the weather service in North Little Rock.

The system that moved north from the Gulf Coast reached Louisiana's coast Saturday as a Category 1 hurricane but was downgraded to a tropical depression by Sunday afternoon. Widespread flooding and tornado threats arose as the system moved through central Louisiana and Mississippi and eventually into Arkansas.

Hager said Wednesday that 30 homes and 16 businesses in Howard County were affected by flooding. Sixteen county roads were washed out, and the county jail had to evacuate 30 inmates after rainwater made its way into the building, she added.

"We expect the jail to be back up and running soon," Hager said.

The Police and Fire Departments in Nashville also were damaged.

"It hit us hard," Mayor Billy Ray Jones said. "It's going to take awhile to get past this one."

Damage was limited mostly to city-owned buildings that sit next to a creek that overflowed, the mayor said.

"We had some flooding in City Hall, but we already had it sucked up," Jones said Wednesday. "It only got 2 to 3 inches at City Hall, which is completely different than the lower-end areas that had around 3 to 4 feet."

The Police and Fire Departments moved equipment and personnel to dry areas in the buildings or moved altogether to another part of town.

"They got to keep doing their job," Jones said. "The Fire Department is making temporary stations where their trucks are located, and the Police Department is moving to different locations within their building."

A Tyson Foods plant that was evacuated Tuesday because of high water reopened Wednesday, Jones said.

Roads in southeastern and south-central Arkansas were greatly affected by the flooding. A portion of Interstate 30 remained closed for repairs Wednesday, and numerous highways washed out in places.

Arkansas Department of Transportation spokesman Danny Straessle said the outside, eastbound lane of I-30 near Prescott was still closed Wednesday as crews assessed the damage.

"It appears some slope erosion occurred from Wilson Creek," Straessle said. "We will have to get some equipment to repair it."

Secondary routes and six segments of state highways also have been closed because of washouts or culvert failures, the agency said.

"A lot of times what you see in these situations isn't the bridge that has been washed out, but the embankments of the roads that connect to the point of structures have eroded," Straessle said. "We were fortunate [Tuesday] that the water receded as quickly as it did. It was an enormous amount of rain that fell in one area in a short span of time."

Hager said Arkadelphia and Gurdon were hit the hardest in Clark County, with six businesses affected by flooding.

The National Guard was in Arkadelphia on Wednesday providing water to residents after a waterline was damaged by storms and a citywide boil order was issued.

Workers at the city's water treatment plant spent almost 24 hours isolating a leak in the system that led to the boil order.

"We were able to figure out that lightning had struck a tree that was very close to the waterline, and it caused the line to blow up," Arkadelphia City Manager Gary Brinkley said. "The creek the line was under was 6 feet taller than normal so it took us until 8 p.m to find the leak, and at 3 a.m. we were fully operational."

Brinkley said the city is working with the state Health Department to get the boil order lifted as soon as possible.

The Humane Society of Clark County and one other building were the only buildings in Arkadelphia affected by floodwaters, the city manager said.

"All the water has cleared out and the city is fully functional," Brinkley said Wednesday. "Once the rain stopped, it drained out quickly since the Ouachita [River] wasn't filled to the banks."

Hager said only one home in Nevada County was affected by flooding, but several county roads were washed out.

The National Weather Service is calling for dry weather through the weekend, when dangerously high temperatures are expected to spread across the central and eastern United States, according to The Associated Press. Temperatures are forecast to reach 100 degrees in some areas.

[Video not showing up above? Click here to watch » https://www.youtube.com/watch?v=gDu4_yr5yW0]

Heat advisories and excessive-heat warnings are expected throughout the weekend in Arkansas, according to Joe Goudsward of the National Weather Service in North Little Rock. Heat index values are predicted to be around 105 degrees through Saturday.

"We will see highs in the lower 90s," Goudsward said. "The big thing is the humidity from all the moisture in the air. It will be hot and steamy all through the weekend."